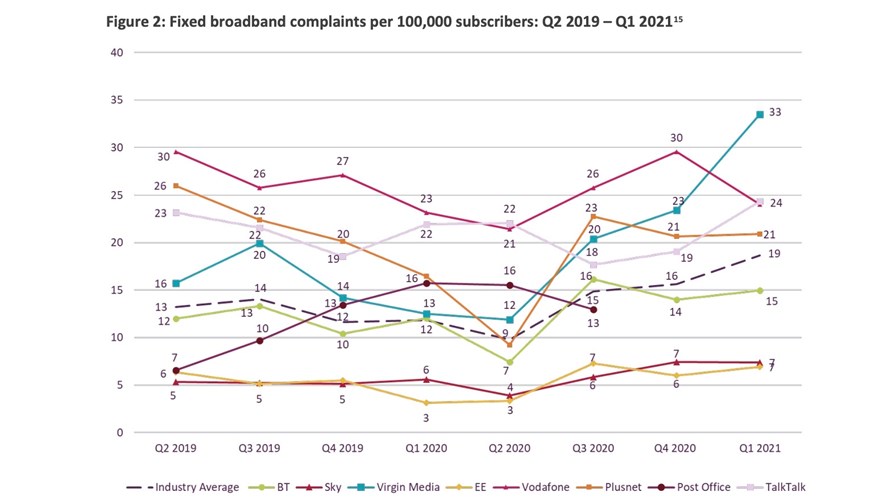 If ever there was a time for the top team at Virgin Media O2 to step back, take stock of the service provider’s situation and public image, and think about the changes needed for long-term success (or even just survival...) then this is it, because right now the recently-forged UK network operator is in the spotlight for all the wrong reasons.

The latest Telecoms and pay-TV complaints report from UK regulator Ofcom shows that, during the first quarter of this year, Virgin Media was the most complained-about broadband, landline and pay-TV provider in the country, and “the main reason customers complained to Ofcom about Virgin Media was to do with how the company handled their complaints.”

To make matters worse, its cellular service unit, Virgin Mobile, was the second most complained-about mobile operator behind only Three UK (covering pay monthly customers only, not including pre-paid). According to Ofcom, Virgin Mobile’s main complaint drivers related to complaints handling (27%); changing provider (23%); and billing, pricing, and charging issues (22%).

All in all, that’s a massive indictment of Virgin Media’s corporate culture and attitude towards the customers that fuel its top and bottom line.

The Ofcom report emerges just as O2 is attracting quite a lot of negative media coverage because it’s being investigated by the UK’s Serious Fraud Office over allegations of bribery and corruption related to the award of customer contracts prior to the merger, a matter identified by UK newspaper The Telegraph. Virgin Media O2 referenced the ongoing investigation in its recent financial report, noting that “O2 has been addressing a request for disclosure made by governmental authorities related to possible violations of anti-bribery laws and regulations. O2 continues to co-operate with the governmental authorities investigating this matter, which is still ongoing.”

The Ofcom report and the SFO probe together create an horrendous perception of a company stoked with hubris and lacking humility.

Given that the Ofcom report relates to the first quarter of the year, prior to the merger, the two service providers and their parents would have known they had work to do on the customer care front. And it’s not like Virgin Media was only just worse than its rivals – it was WAY worse, particularly in terms of the number of complaints related to its broadband service (see the chart above). And as Ofcom notes, the main gripe of the customers across the board was that Virgin Media was terrible at dealing with the complaints of customers – that’s the first line of defence, the one that’s so easy to get wrong but also the one that’s in the hands of the service provider (it’s not a router that’s faulty or broadband line cut by a utility company – there’s no third party to pass the buck to in this case).

Here is Ofcom’s analysis of the complaints against Virgin Media where the operator was the worst among all its peers during Q1:

Broadband (by far the most complaints per 100,000 subscribers)

Landline (by a small margin the most complaints per 100,000 subscribers)

What does Virgin Media have to say? It digs an even deeper hole for itself with the following response to our request for comment:

“Providing a great customer experience alongside fast, reliable services is our number one priority. Since Ofcom collected its data for this report, we have made a number of improvements to our customer service, including hiring more than 500 care agents, which has seen complaints decrease by 70% putting them at their lowest level since 2018. We will keep investing and making improvements to give our customers the high-quality service they rightly expect.”

Well, if providing a “great customer experience” is its “number one priority” then it’s in very deep doo-doo, because it has clearly been doing a terrible job. The company also seems to believe that throwing bodies at the issue (if indeed it has) is a remedy, but there is no specific mention here of any change in the way it deals with customer complaints, no clear recognition of its failings. And no humility, no apology. The company should be ashamed of the Ofcom results, but if it is then it’s not sharing its humility.

Virgin Media O2 has been boasting of investment plans, of 5G coverage and fibre deployments, and that’s great. But any CSP can have a great network and yet still be a failure because it doesn’t recognize what is important and what drives recurring cashflow – happy customers.

It’s easy to churn these days – everyone knows that and the Virgin Media O2 management need to take steps to prove they recognize this and are taking real action. The first quarter’s numbers from Ofcom should be a major wake-up call – let’s see if future complaint reports from the UK watchdog provide any evidence that the company with the potential to be a much bigger and better company than the sun of its parts has taken note and taken action.