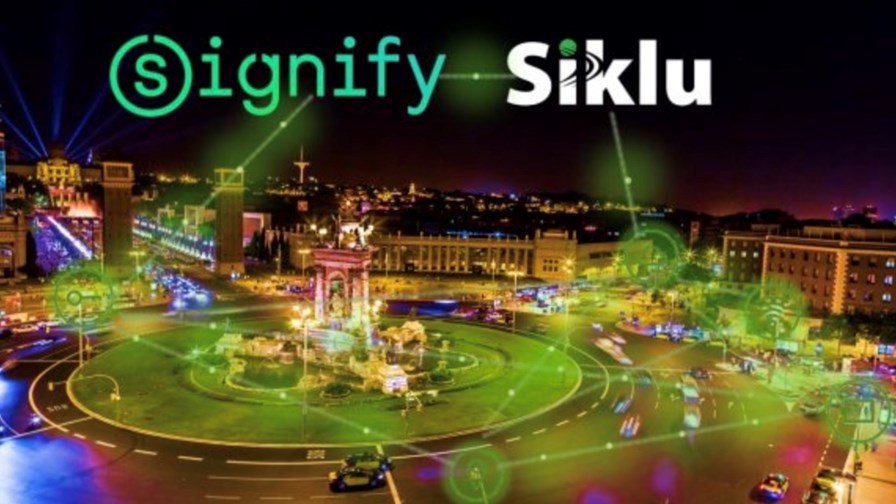 Signify, the company that, until May 2018, had for many years been known and renowned globally as Philips Lighting, is partnering with Israeli mmWave specialist Siklu to provide innovation, development and commercialisation of “pervasive multi-gigabit wireless connectivity for digital cities” by integrating gigabit-speed wireless connectivity into lighting infrastructure. The two companies have, in fact, been in partnership for over a year, but have only just officially announced that they are as one, as it were, where 'street furniture' and lampposts are concerned.

The collaboration brings together Signify’s ‘BrightSite’ product lines and Siklu’s ‘MultiHaul’ multi-gigabit wireless connectivity technology: The resulting addition to the BrightSite suite of products will henceforth be known as ‘Broadband Luminaires'. (The planet’s original luminaires were the sun and the moon, but from the 19th Century onwards the definition has been broadened to include the lamp and all components directly associated with the distribution, positioning, and protection of a light unit, but does not include the support components such as poles or posts.)

In essence, Signify BrightSites is converting streetlights into a quickly and easily accessible broadband wireless connectivity mesh able to support a range of digital city services including IoT, security and traffic monitoring, and 4G/5G small cell signals. The initiative will also support “digital inclusion” initiatives such as municipal Wi-Fi and residential broadband access. It leverages Siklu’s Terragraph-compliant MultiHaul multi-gigabit wireless connectivity technology to greatly reduce dependency on expansive and disruptive fibre deployment and enable municipalities to create a wireless mesh network simply by replacing their luminaires with broadband luminaires to provide town- and city-wide scalability for secure, reliable multi-gigabit wireless connectivity, at a fraction of the cost and time of deploying an all-fibre network.

The Terragraph project was started by Facebook as a route over which service providers would be enabled to provide “fibre-like” high-speed broadband multi-hop connectivity a few metres above street level via millimetre wave technology. It operates in the unlicensed 60GHz ‘V’ band and relies on the cloud for self-organisation and data processing. It piggybacks on existing street furniture to create a gigabit speed in densely populated urban and suburban settings and is particularly efficient in last mile fixed access.

Terragraph uses standardised 802.11ad and 802.11ay, and currently can provide a peak data rate of 4.6 Gbps (in simplex mode) and average peak user throughput of over 1 Gbps. Its single link maximum range is about 250 metres, so a lot of equipment is needed to provide a mesh network. Fortunately, the equipment used is small, lightweight and low power and a network can be set up in days rather than months. It also supports highly scalable layer-3 mesh, powered by Open/Routing software and uses IPv6.

Khalid Aziz, the Head of Connectivity Solutions at Signify said, “We aim to radically accelerate the transition to smart cities by enabling the lighting infrastructure as a primary platform for cost-effective and scalable broadband connectivity. With our combined solution, we overcome significant hurdles for the creation of dense networks by ensuring every light point acts as a data hub.”

As TelecomTV pointed out in an article published last summer and quoting from a report by Northeast Group, there are 326 million streetlights worldwide and that number will increase to more than 361 million by 2029. By then, 73 per cent will be fitted with LED lights and 23 per cent will be classified as ‘smart’ streetlights capable of housing communications technology and enabling connectivity. The Northeast report noted. “Cities and utilities with smart streetlights are now exploring ways to both improve urban efficiency (through smart parking, environmental sensors, waste management, and other applications) and increase revenue (through licensing agreements with telecommunications operators, monetising urban data collection, and other initiatives).”