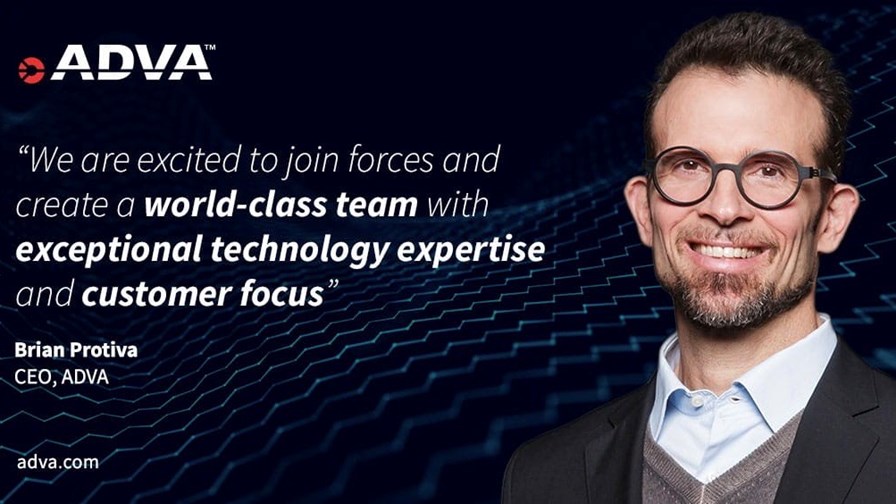 The multi-billion-dollar merger of broadband access tech specialist ADTRAN and optical networking specialist ADVA took an important step towards completion this week as the two companies gear up to address what they believe will be a significantly larger ‘total market opportunity’ (TAM) worth almost $14 billion within a few years’ time.

The two companies announced their plan to merge in late August 2021 and have been making steady progress towards an anticipated completion during the second half of this year.

Then this Thursday (6 January), ADTRAN hosted a special meeting at which its shareholders overwhelmingly approved the merger, a deal that will bring together ADTRAN’s broadband access portfolio with ADVA’s optical, synchronization and virtualization product sets to create a single “end-to-end fiber networking solutions” company with annual sales of more than $1.2 billion (with, currently, ADVA contributing about 55% of those sales and ADTRAN about 45%).

The resulting marriage, which will see current ADTRAN shareholders own a 54% stake in the merged company (to be called ADTRAN Holdings Inc.), will be headed up by current ADTRAN CEO Tom Stanton, with ADVA CEO Brian Protiva as Executive Vice Chairman: ADTRAN CFO Mike Foliano will retain that role while ADVA’s CTO Christoph Glingener will be the technology lead for the merged company.

And if all goes to plan, the merger will be the result of a lengthy courtship, according to ADVA’s CEO Brian Protiva. He noted during a recent briefing with TelecomTV that he’d been chatting with Stanton for more than a decade.

“The fact we have complementary products led to us building a good rapport, exchanging thoughts, strategic views and so on, which then ultimately led to us actually taking a run at bringing these two companies together, and just from a timing perspective, it didn't work out a couple times,” stated Protiva.

“This time, we started ‘dating’ again in 2019 and finally decided this is really good timing... The complementary nature of the geographic [business focus – North America and Europe], of all the technology pieces and the product portfolio, it just makes a lot of sense.”

“What always is risky is the cultural aspect, and which roles go to which people etc. but that was also a fairly easy discussion between Tom and myself. We stayed in touch, we knew each other's teams and very much respected each other's teams – there are good people on both sides that are open, transparent – the way that you want to communicate.”

He continued: “ADTRAN is a great company that’s going into a really nice growth mode [and] everybody's seen ADVA’s results over the past one-and-a-half years [which have been] outstanding... [but] we just felt that neither of us are big enough on our own to really become strategic for some of these large Tier 1 accounts globally, so it all aligned. Ultimately, what we're trying to do is build a global leader... the TAM is really, really interesting – it’s a doubling of the TAM opportunity that we can go after together... For me, this is just the first move, this isn’t the end game.”

Ah yes, the doubling of the TAM: According to the duo, their current addressable market is valued at about $7.1 billion, which includes about $1.6 billion of Huawei replacement opportunities; the “future” TAM (which appears to be some point during the next five years, based on footnotes in an investor presentation used to communicate the merged company’s potential), rockets to $13.7 billion, almost double where it is now.

That increased value comes mainly from the opportunities from what they describe as “unprecedented government stimulus and private investment” opportunities with Tier 2 and Tier 3 network operators in North America and Europe (valued at about $5.1 billion) and about $1.5 billion in new markets (Australia, Japan, India, South-East Asia, Latin America) for the combined access, metro and carrier Ethernet product sets that can be targeted due to the combined company’s “enhanced scale.” And Protiva believes that only in the “new markets” opportunities will the company face a competitive threat from Huawei: “There are no Chinese that can attack us” in North America and Europe, where Nokia is the main rival for a combined offering of access and optical capabilities.

Those government stimulus packages include the US Infrastructure Bill, the Rural Digital Opportunity Fund (RDOF) and individual state and local funding for broadband within the next four years, plus European government funding for broadband rollouts in countries such as Germany and Poland and an estimated $30 billion or so that will be pumped into fibre access rollouts in the UK alone (by Openreach and the scores of altnets now building out new fibre access networks).

And just by being a bigger company with enhanced sales and support services on both sides of the Atlantic for the expanded portfolio, the opportunities increase, noted ADVA’s Vice President of Marketing, Stephan Rettenberger. “ADTRAN has shown it can win Tier 1 European business” with operators such as Deutsche Telekom and Telefónica, “but clearly in terms of the support infrastructure, the distribution hubs, etc. [ADVA has] better and larger infrastructure to support those customers across Europe. And quite frankly, some of those guys said if you are now a €1 billion-plus player then you're becoming a lot more strategic, and you should get a larger share of the pie. So we will help each other in the opposite geographies and have a much more complete and rounded portfolio.”

And what will that mean for the ‘ADTRAN Holdings’ sales in the future?

Protiva confirmed that major existing customers are hinting at a bigger slice of the pie if the merger goes to plan and there are “no operational excellence issues,” with the ADVA CEO expecting the combined company’s story to get “stronger and stronger in the second, third, fourth and fifth year, as ADTRAN becomes this $1.5, $1.7, $1.8 billion high-tech business... and I don’t see a strong competitive threat,” says a bullish Protiva, momentarily forgetting the global giant that is Nokia, which currently puts the TAM of its fixed access and optical units (both part of its Network Infrastructure division) at more than $20 billion and has a current annual revenue run rate from its access and optical products lines of around €4 billion ($4.54 billion).

So when does Protiva expect ADTRAN Holdings to hit annual revenues of $1.8 billion? He was more cautious about answering that, given that the merger process is still in progress, noting only that current growth models based on the existing business of the two companies points to annual revenues of up to $1.5 billion within the three-year range, without factoring in the potential of new business opportunities.

But he’s not alone in his bullish stance: In a research note issued last November, Northland Capital Markets analyst Tim Savageaux wrote that he expects the combined revenues of ADTRAN and ADVA to be reaching $1.4 billion in 2022 and for the company to be a “solid double digit grower,” a trajectory that would certainly push it towards $1.8 billion in revenues within three or so years.

That’s all very positive and, perhaps unusually, with some reason: Both ADTRAN and ADVA have proven themselves over the years to be reliable companies that focus on what they’re good at and expand their portfolios and areas of expertise to deliver what customers need and into logical adjacencies – ADVA’s acquisitions of Overture in 2016 for virtualization software and Oscilloquartz in 2014 for network synchronization capabilities (so important in 4G and 5G backhaul networks) are prime examples.

The biggest hurdle to success, as Protiva noted, will be the integration of the two companies – something that is always tricky, no matter how good a fit any two companies might seem to be.

ADVA’s CEO is aware of that. “Culture is not an issue but integration is clearly [a challenge] but we’ve got a plan, this wasn’t cooked within a few weeks.... I’m a firm believer that we we've understood what we need to do and we're going to do it really well,” stated Protiva, who will currently have his eyes on 12 January (midnight CET), which is the close of the initial acceptance period for the tender of ADVA shares: For the merger to proceed as planned, at least 70% of the ADVA shares must be tendered by this time, the companies have noted.