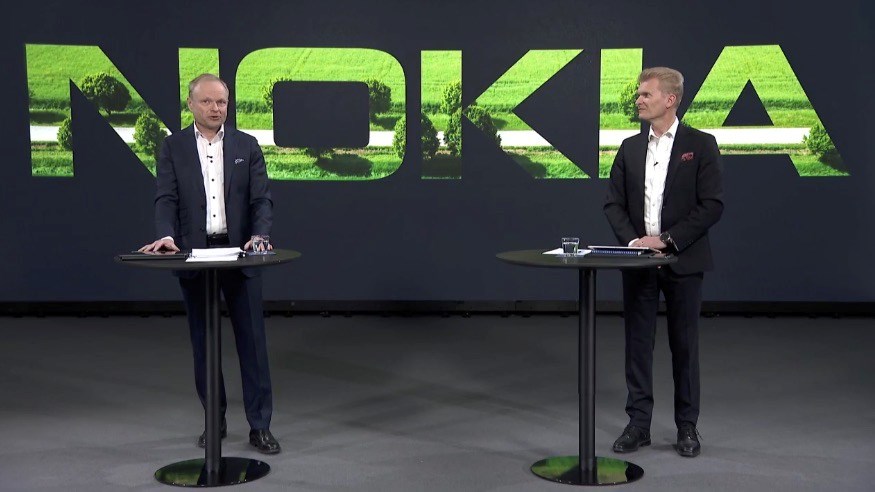 Nokia has a long way to go to get itself fully back on track but its business performance during the first quarter of 2021 shows that it’s on the right track and streets ahead of where it was a year ago in terms of fiscal health, thanks largely to demand for its fixed network infrastructure product lines.

The vendor reported first quarter revenues of almost €5.1 billion, up by 3% from the same period a year ago and, at constant currency conversion rates, about 9% better year-on-year. The biggest change is in its operating profit, which came in at €431 million compared with a €76 million operating loss in the same quarter last year. The numbers were much stronger than expected, sending the vendor’s share price up by more than 9% on the Helsinki exchange to €3.90.

Mobile Networks is still the largest sales driver for the vendor, contributing revenues of €2.26 billion (slightly down from a year ago), but the unit is still in turnaround mode as the vendor migrates its portfolio to its own ReefShark chipset. That, and ongoing intense competition, will keep margins very low this year, but in the first quarter of this year the operating margin, at 3.4%, was at least better than last year’s 0.6%.

There was also confirmation from CEO Pekka Lundmark during the company’s earnings webcast that Nokia would be pitching for 5G RAN business in China in the next round of equipment tenders from the country’s three major operators: Nokia has stepped back from that particular business opportunity to date because of the price pressures and low margins.

From a business perspective, the vendor’s Network Infrastructure business group (fixed broadband access, IP routing, optical transport, submarine networks) was the star of the first three months of 2021. Its revenues were up by 22% year-on-year to €1.73 billion, while its operating margin of 10.8% was in stark contrast to the operating loss of a year ago. 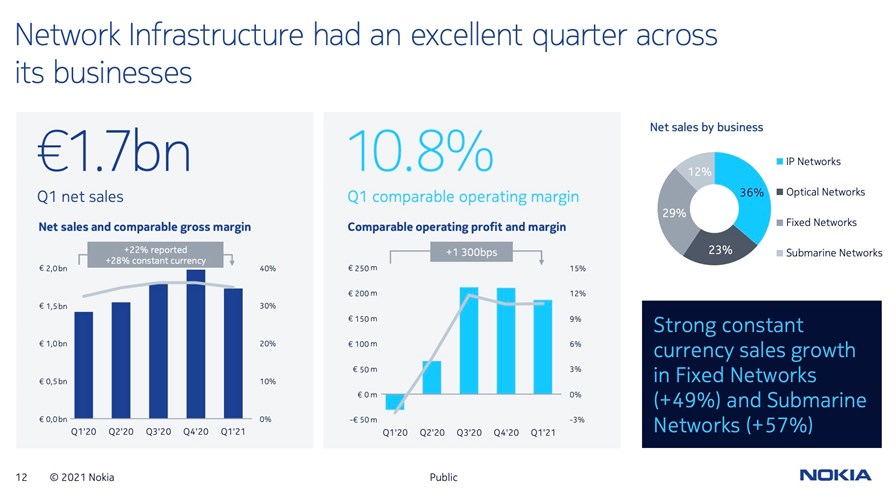 The fixed broadband access part of that group had a particularly strong quarter, generating revenues of about €502 million, up by 49% from a year ago. That’s a massive leap, but the Network Infrastructure business group President Federico Guillén and his colleague, Fixed Networks CTO Stefaan Vanhastel, told TelecomTV recently that demand for fibre broadband products, particularly multi-PON systems with 10 Gbit/s and 25 Gbit/s support, had been very strong from the latter part of last year. (See Fibre now as critical as 5G to operators: Nokia’s Guillén.)

Lundmark noted during the webcast that demand had been strong across all parts of the Network Infrastructure portfiolio and that the “mega trends” driving demand for fixed access broadband technology “are not going away.”

The other main item of note from Nokia’s results is its ongoing traction with enterprise customers, which have been particularly interested in the vendor’s private mobile networks offering: Sales to enterprise customers were up by 14% year-on-year as the company gained 63 new customers.

Nokia has a long way to go, and a painful restructuring process to go through, before it can consider itself out of the woods and in a strong and safe operating, financial and competitive position, but this is at least a good start to what is likely to be a challenging year.