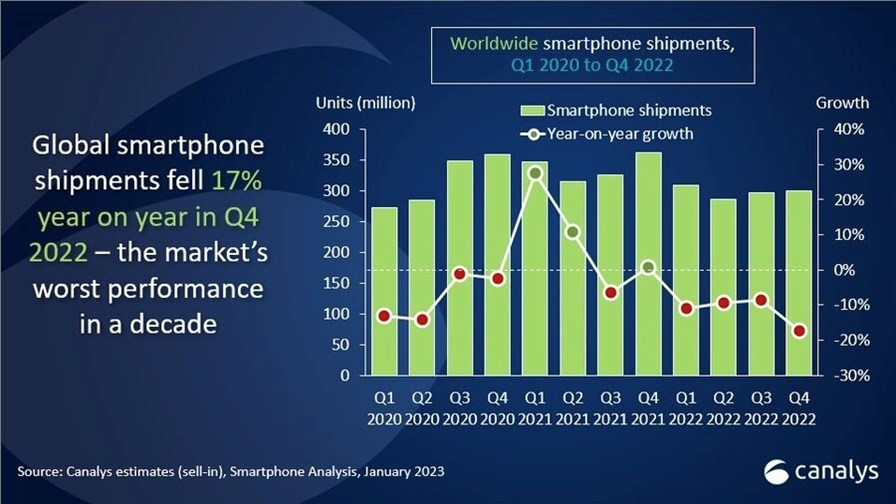 Global smartphone shipments fell by 11% year on year in 2022 to less than 1.2 billion, with sales in the final quarter of the year alone marking “the worst annual and Q4 performance in a decade,” according to data from research firm Canalys.

The decline was a sign of the times as 2022 was “an extremely challenging year” for handset vendors, who “struggled in a difficult macroeconomic environment,” noted Runar Bjørhovde, research analyst at Canalys.

Looking at Canalys’s estimations for the final quarter of 2022, shipments are expected to have declined by 17% year on year to around 300 million units (see graph, above).

It was not bad news for all players in the market, though. According to Canalys estimates, Apple regained the top spot during the fourth quarter of 2022, achieving its highest-ever quarterly market share at 25%, despite facing challenges such as declining demand and manufacturing issues in China. Samsung ranked second with a 20% market share. The top-five smartphone vendor list was rounded out by Xiaomi (11%), Oppo (10%) and Vivo (8%).

The prospects for this year don’t look very bright either. Manufacturers are expected to “approach 2023 cautiously, prioritising profitability and protecting market share,” noted Canalys research analyst Le Xuan Chiew. The company has forecast flat to marginal growth for the smartphone market this year due to the difficult macroeconomic conditions.