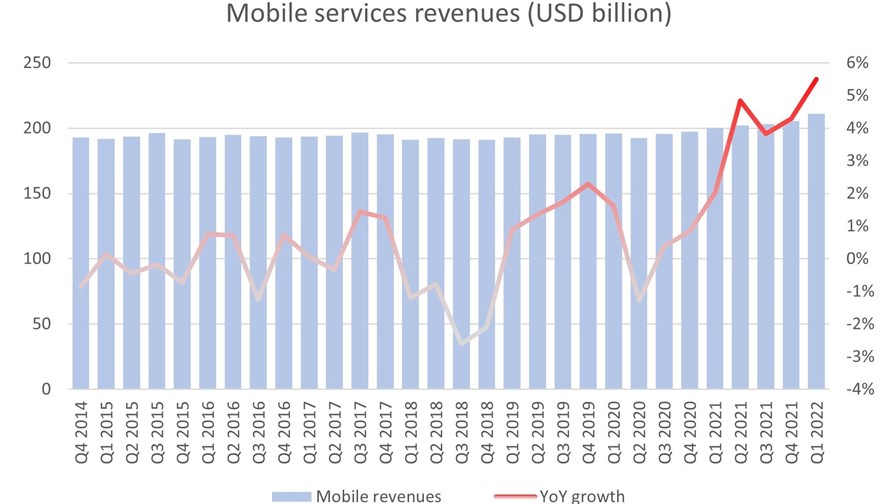 The global mobile services market grew by 5.5% year on year during the first quarter of 2022, its fastest rate of growth in 12 years, to generate record revenues of US$210bn, according to research company Omdia.

“The mobile market hasn't seen growth at this level since 2010, when 4G was launched and mobile penetration was half of what it is today,” noted the Omdia team, which bases its calculations on information collected from 731 operators in 226 countries.

Perhaps in anticipation of complaints or requests for corrections, the Omdia team notes that its revenue figures may differ from those reported by the operators due to differences in definitions. Omdia’s calculations include all revenues attributed to the provision of subscriber voice and non-voice services, including roaming charges and net interconnection revenue, IoT service revenues, income generated from the lease of network capacity to mobile virtual network operators (MVNOs), and revenues generated from non-retail enterprise operations, such as IT and managed services.

The Omdia team cited Covid-19 recovery, ongoing 5G uptake and increasing levels of cellular internet of things service activity as the three main core drivers of the growth, but there are new challenges ahead that will likely suppress growth levels in the near term.

According to Ronan de Renesse, senior research director for service provider markets at Omdia, further growth is expected in the second quarter of the year and beyond, but at a slower pace. Factors affecting the growth rate include tight Covid-19 restrictions in China and the effect in eastern Europe of Russia’s invasion of Ukraine, while “macro-economic factors, such as inflation and the prospect of a global recession, will affect consumer propensity to spend on mobile services in the future," noted de Renesse.