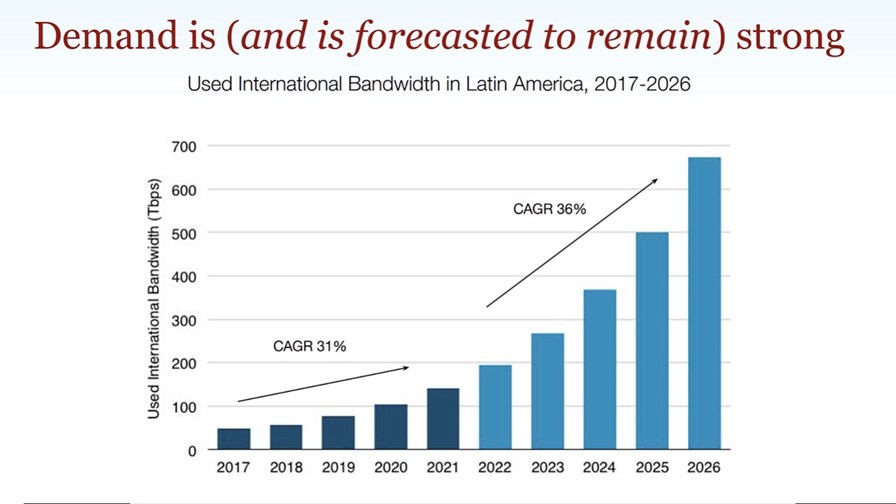 Latin America is set for an international data traffic boom during the next five years, with ‘used bandwidth’ on network routes running in and out of the content set to grow more than threefold in the 2021-2026 period, according to forecasts from Telegeography, which has been tracking and reporting on such trends for decades.

First, the numbers: The Telegeography team expects international lit bandwidth to increase from 150 Tbit/s in 2021 to almost 700 Tbit/s in 2026, with a compound annual growth rate (CAGR) during the period of 36%, as shown in the graph above. (The graph is part of a slide deck that can be accessed here.)

Telegeography notes that demand for capacity is “strong and continues to rise,” and while the international data backbone operators account for a majority of the used bandwidth, the “content providers” (Microsoft, Google, and Facebook in particular) are using more and more capacity.

There are a number of factors driving this increasing demand and usage. First, there are the economics: Anahí Rebatta, Senior Analyst at TeleGeography, notes that “100Gbit/s wavelength price erosion is outpacing 10Gbit/s price erosion in nearly all routes. This suggests it will be more cost-effective for customers to upgrade their networks moving forward.”

That helps, of course, but they would only do that if there was an uptick in service usage by end users and the networking and cloud infrastructure to support digital service provision both in-country, between LatAm countries and then also on international routes.

All the signs are there, though, to suggest this is happening: As in the rest of the world, LatAm network operators have been investing in high-speed fixed and mobile access for consumers and enterprise users, and as we know, if you build fatter pipes to customers, they will fill them up. And it’s noteworthy, too, that the likes of Telefónica and TIM (Telecom Italia) continue to laud their LatAm operations and invest in those markets (in terms of capex and M&A, including the €2.6 billion acquisition of OI’s mobile operations), as there is still pent-up demand to be tapped.

And a critical driver of bandwidth usage is, of course, the consumption of cloud-based and streaming services and it’s notable that investments from the hyperscalers are also ramping up in LatAm to support growing demand (which in turn drives international data traffic volumes).

“Beyond the nine existing cloud regions in service in Latin America, there are six planned cloud regions—with Microsoft set to land in Brazil, Chile, and Mexico, and Oracle investing in Chile, Colombia, and Mexico,’ notes Telegeography.

Local players are also investing: Just this week, we reported how Elea Digital has turned to power/cooling systems specialist Vertiv to support its edge data centre operations in existing key markets across Brazil with a view to further expansion across Latin America.

All of this points to the likelihood of broader digital service usage and engagement across Latin America in the coming months, which can only be a positive sign for the region’s population and economies.