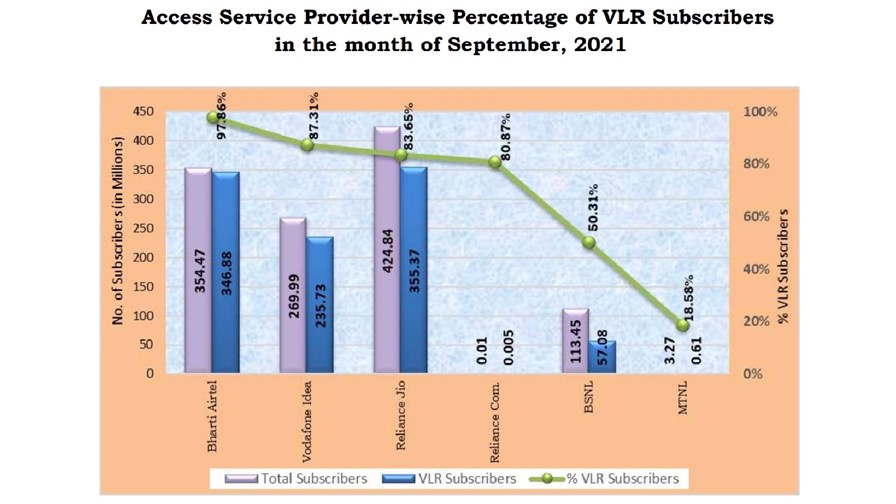 Bharti Airtel and Vodafone Idea have raised their pre-paid mobile tariffs for users in India and rumour has it that Reliance Jio will soon follow suit, potentially bringing some welcome respite to the cash-strapped Indian market.

And, only semi-coincidentally, as prices go up, customer numbers are falling.

Airtel on Monday detailed a raft of tariff changes that will take effect this Friday, 26 November. At the low price point, it has added 25% to its 79-rupee tariffed voice plan, pushing it up to INR99 – and adding more talk time, as a sweetener – while its bundles have gone up by around 20%; a INR149 plan for 2GB data now costs INR179, for example.

The following day Vodafone Idea detailed its new plans, effective Thursday, which for the most part mirror Bharti's exactly.

And both operators made it clear that it's all about increasing average revenue per user.

"The new plans will start the process of ARPU improvement and help address the financial stress faced by the industry," Vodafone Idea said in a statement. Higher rates will enable it invest in its network and, of course, help the government realise its Digital India vision.

Airtel sidestepped the altruistic angle, and focused solely on ARPU uplift as the driving force behind its new plans.

"Bharti Airtel has always maintained that the mobile Average Revenue Per User (ARPU) needs to be at Rs 200 and ultimately at Rs 300, so as to provide a reasonable return on capital that allows for a financially healthy business model," it said. "We also believe that this level of ARPU will enable the substantial investments required in networks and spectrum. Even more important, this will give Airtel the elbow room to roll out 5G in India."

Airtel has indeed talked about ARPUs at those levels for many years. Essentially, the rationalisation of the Indian mobile market did not have the desired effect for the operators that survived the exodus, largely due to the well-documented arrival of Reliance Jio Infocomm and the price war it triggered.

It's around seven years since Airtel acquired Loop Mobile, in the process kick-starting the mergers, acquisitions and exits trend in India that has since seen the number of operators there drop from 15 to... well, three major private players, the two state-owned incumbents – now much reduced in scale – and the remnants of once mighty Reliance Communications still lingering.

In the last quarter of calendar of 2013, just prior to the Loop announcement, Bharti Airtel reported ARPU of INR195, up from INR185 in the year-earlier quarter. In its latest results presentation, for the three months to the end of September, ARPU was INR153, a sequential improvement, but down from INR162 in the year-ago quarter.

To say those figures are not high is something of an understatement. The INR200 Bharti is shooting for is less than US$2.70 at today's exchange rates, while its INR300 target for financial health is around $4. There is, of course, a volume game at play here though.

According to the latest figures published by the Telecom Regulatory Authority of India (TRAI), Bharti Airtel had a total mobile base of 354.5 million at the end of September, Vodafone Idea almost 270 million, and market leader Jio 425 million. The big three together claimed 90% of the 1.17 billion-strong market.

But those big headline figures mask a slightly different market situation. The overall number of mobile customers in India is falling, and the number of active users in the market is below the 1 billion mark – 995.67 million at the end of September, to be precise – with disruptor and front-runner Jio losing more customers than its rivals.

Net mobile customer losses in India in September came in at 20.7 million, the majority – just over 19 million – being Jio losses. The only telco to add to its customer base was Bharti Airtel, but its gains were minimal, as were the other players losses...although its worth noting that Vodafone Idea shed over 1 million customers, which while 'minimal' in India would be a fair amount elsewhere.

Jio also has a higher proportion of inactive customers than its big two rivals, with its active users coming in at 83.65% in September, according to India's Visitor Location Register (VLR) data (see chart above).

However, it has been working hard to clean up its customer base, which probably explains those hefty losses. According to the Economic Times, Jio weeded out lower paying users in fiscal Q2, the July-September quarter, which led to a decline in its customer base of more than 11 million, but raised ARPU to INR144 from INR138 in the previous quarter.

Clearly, shedding customers in order to push up ARPUs is a temporary solution; in the long term it's about as effective as airlines eliminating an olive from first-class Martinis. And looking at Jio's historic figures, ARPU is still INR1 below where it was in Q2 2020 anyway. In addition, Vodafone Idea has been shedding customers for years (it has lost 58 million customers during the past two years) and its ARPU was down to INR109 in fiscal Q2 from INR119 a year earlier, admittedly also with a sequential improvement from Q1.

No, addressing the pricing situation is the only way for telcos to keep average revenues up – and in turn be able to fund 5G rollout and pay their various dues to the government, although the latter should ease somewhat as a result of the recent telecoms reform package – and the telcos are doing just that. At the time of writing, Jio had yet to join the other two in upping its rates, but the word on the street is that it will happen soon.