From too many CSPs to too few: India’s mobile woes 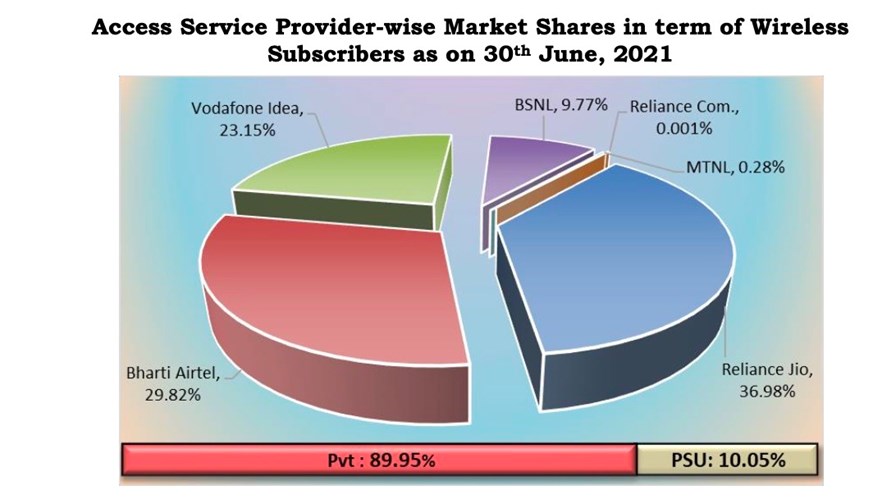 When mobile number portability was introduced in India 10 years ago, the country’s mobile users had a healthy selection of competitive service providers to which they could switch if they so wished – in 2011 India boasted 15 mobile service providers which between them reported 771 million mobile connections (of which 549 million were ‘active’), and of those service providers 11 had more than 5 million connections. Reliance Jio didn’t exist.

A decade later and the situation is very different, as the chart above shows. According to the latest statistics from regulator TRAI (Telecom Regulatory Authority of India), the country now has 1.18 billion mobile connections (of which almost 985 million are ‘active’) but only six named service providers, one of which (Reliance Communications, a former giant of the sector) has fewer than 10,000 connections.

Of the remaining five, two are state-owned, perennially under-funded and set to merge (so they are effectively a single entity): BSNL and MTNL between them have 10% of the market (nearly all of which is accounted for by BSNL, as MTNL only covers Delhi and Mumbai while its spouse-to-be offers services everywhere else across the country).

That leaves three privately-owned operators controlling 90% of the world’s second largest mobile market, and one of those is in such dire financial straits there are even doubts it will survive: Vodafone Idea is overloaded with a net debt of 1,907 billion rupees ($25.7 billion) – much of which is owed to the Indian government – reported a net loss of almost $1 billion in its most recent quarter and is also losing customers at a staggering rate.

During June, Vodafone Idea lost almost 4.3 million customers – a massive number in just one month, but that still leaves it with 273.3 million connections, a 23% market share. That’s a massive chunk of the market, of course, so it would be catastrophic if it collapsed, and even its rivals know that: Bharti Airtel Chairman Sunil Mittal has been urging the government to somehow ensure Vodafone Idea’s viability so the market has at least a “3+1” operator structure, the Business Standard reported recently.

One idea is to merge Vodafone Idea with BSNL/MTNL under state ownership, but the Times of India has reported that this idea is not popular with India’s government.

When India had 15 operators, consolidation was inevitable, but few would have foreseen a situation whereby a country of about 1.4 billion people, and little in the way or fixed communications connectivity, has so few viable options when choosing a mobile service provider. It's bad enough that the sector has a 3+1 structure – even less competitive choice for individuals and businesses, all of which rely on mobile connectivity for many truly essential services, would be a disaster that could be avoided. India's government needs to go against type by acting quickly and in the interests of its entire population.