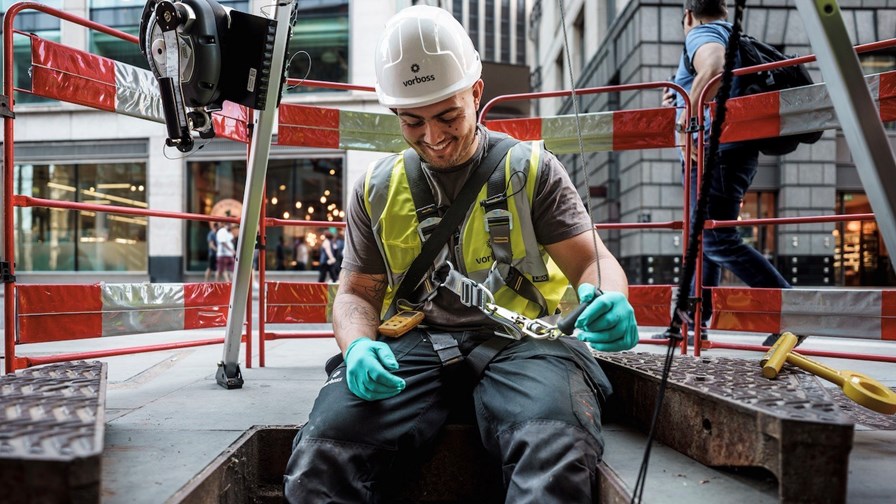 Someone's happy to be at work...

After years of broadband inertia, the UK is now awash with competitive fibre-to-the-premises (FTTP) network builders but, despite the dozens of competing rollouts and increasing levels of overbuild across the country, one company has identified what it believes is a lucrative gap in the market and has £250m of financial backing to fund its ambitious plans.

That company is Vorboss, a small player with big plans that, if well executed, could shake up the high-speed business broadband market in London, which is home to tens of thousands of businesses that, according to Vorboss CEO Timothy Creswick, are being held back by inefficient, expensive and sub-standard broadband services that are not fit for purpose.

“10Gbit/s broadband should be commonplace, mundane, unremarkable, and it isn't. And as a result, companies haven’t got enough bandwidth, and they’re making a myriad of technology choices where that [lack of bandwidth] is a constraint, where the IT manager is rejecting solutions or not even bringing possible solutions into play because they know the bandwidth isn't there to support them. Those things don't really come to the surface, but they’re there,” said Creswick.

So why is Vorboss, which is hardly even a well-known name in UK broadband circles, let alone the London business community, equipped to shake up the market?

According to Creswick it has a killer combination of a supportive financial backer with a long-term vision (a “15-year horizon”), a network that can meet the digital connectivity needs of business users of all sizes, and a dedicated team that deals with everything (thus ensuring accountability, responsiveness and high levels of customer experience).

Vorboss isn’t new to the broadband market: It had previously been selling business broadband services in London for years but using wholesale products – it didn’t have its own network and so wasn’t in full control of the end-to-end product.

But in 2019, UK regulator Ofcom updated the regulations related to the use of infrastructure owned by Openreach – the UK’s fixed access line wholesale giant that is a quasi-autonomous unit within the BT Group – which allowed competitive network builders to lay their own fibre cables in Openreach ducts in order to target the enterprise user market.

The Vorboss team began exploring the potential of building its own fibre access network in London without having to dig up the roads. It began by exploring the potential of different types of network architectures that would be most suitable and started down the road of a fibre deployment by investing about £1m of its own cash, knowing that it would need a lot more capital if it was to make an impact on the London fibre access sector (a market, it worth noting, that major UK wholesale fibre access network builder CityFibre has deliberately avoided).

So as it continued to test the waters, Vorboss went on the fundraising trail, a move that ended with its acquisition in late 2019 by Fern Trading, which added Vorboss to its portfolio of UK broadband network builders and stumped up the funding needed for the London rollout plans – a funding facility of £250m (the same amount afforded to two other fibre broadband companies in the Fern stable!).

“The focus during the fundraise and during 2020 was to prioritise the build around learning, developing and improving processes, so by the time we started building at scale, we had over a year's worth of learnings,” said the CEO.

PON can't cut it for the business sector

What Creswick realised was that using a passive optical network (PON) approach to building out the network wasn’t going to cut it. The company decided the only way to deliver what business users really needed was to build a point-to-point fibre network that gave each customer a dedicated fibre that would enable a minimum 10Gbit/s symmetrical service, and that the only way to build, maintain and support the network, the services and the customers would be to do it almost completely in-house, using hardly any third-party contractors or external support teams. That approach is more expensive than PON, where the capacity of a fibre line is shared by multiple end users (often more than 30), and would take longer to roll out as a whole in-house team would need to be hired and trained, but Creswick, with the backing of Fern, saw that tactic as one with greater long-term returns and higher customer satisfaction levels.

And while most FTTP networks are built using PON technology and architectures, Creswick noted that the technology needed for enterprise point-to-point broadband already exists and is well understood. “The hyperscalers are deploying this kind of fibre capacity between datacentres routinely, a 64-fibre cable is commonly seen on those sorts of routes, but people aren't using this sort of density in a metro access network. So a lot of the technology we're using is not remarkable – it’s only remarkable in that it is being deployed in this context – and that's great because it means it's reliable, it's well trodden; it's understood. You just have to apply it in a different way,” he explained.

The Vorboss approach has been to run massive cables, each containing 800 fibre strands, along the Openreach ducts that run underneath the streets of central London (the CEO describes the target geographic area for the initial rollouts as being roughly equivalent to zones 1 and 2 of the London Underground train network, which covers Hampstead in the north, Canary Wharf and the East End in the east, Clapham in the south and Hammersmith in the west, and certainly emcompasses the financial district and main business areas. Why this area? “About 70% of the UK’s entire business Ethernet services market is in that area,” said the CEO.

The company has so far installed more than 500km of these cables, which interconnect and split off to run to datacentres and customer premises at one of 1,500 “telecom chambers” installed underground within the duct network. There are no street cabinets above the ground and no electrics or power supplies needed along the cable lines – the only powered infrastructure is the customer premises equipment (CPE) at the enterprise’s building and the routers at the more than 25 datacentres being used by Vorboss. Creswick said the company has at least two suppliers for each of its technology products needs, but called out Juniper Networks as a routing platform supplier and RAD as a provider of the fibre termination CPE units.

According to the CEO, the company is now going public about what it has already achieved, and is beginning its advertising campaign across London, because “we think we've achieved enough practical coverage to be able to connect the majority of buildings in central London”, he said. “There's more density to come… the aim is that we’ll have one of our chambers within, on average, less than 50 to 100 metres away from every building in central London, and then [we’ll] connect a specific address. We're only having to do that last little bit, and with enterprise fibre, that’s… economically connectable. The reality is that right now, we may have to go 200 metres to get to the nearest node, but that’s still economically viable… We set out with the aim that we can connect every single commercial premises in central London, and certainly we're on track to achieve that,” added Creswick.

As a result, the CEO said the work done during the past couple of years by the Vorboss team, which is only 350 people strong across all positions including network rollout, has meant the company has “drawn pretty deep” from the £250m facility set up by Fern Trading.

But with the network pretty much built, more of the company’s attention can now turn to generating revenues from customers, said the CEO. The focus so far has been on building out the trunk network, which is largely completed, so now the company can build from the “hundreds” of customers it has currently, some of which are taking 100Gbit/s services.

Creswick is confident the company can be “cash generative very quickly” using the existing deployed network assets and that it can plough its own cashflow into further network development – he expects the network investment to hit a total of £350m within a few years.

And who is he hoping to sell to? The CEO believes there are about 60,000 businesses of various sizes in the target market and the company’s aim is to get half (so 30,000) of those signed up; perhaps even get more than one line into many of those customers because “a big shift that’s coming to the market is the need for resilience”, and because of the network topology, “we can connect a building with two lines that are diversely routed.”

That target is ambitious, especially given that Vorboss doesn’t have the market to itself: There are scores of companies offering business broadband services, including, of course, BT and many others that make use of Openreach’s wholesale services, and enterprise service specialists that have their own existing network infrastructure, such as Colt.

But the Vorboss offer is compelling: The 10Gbit/s service costs £650 per month for the full term of the contract, which can be cancelled at any time by the customer after the initial 12 months, but never cancelled by Vorboss.

“We're going out into a market where the majority of enterprises in London are connected at 1Gbit/s or less, and we're giving companies 10Gbit/s and we're doing that because we believe that capacity and bandwidth should be abundant. For any provider that's not giving an enterprise 10Gbit/s at a sensible price today, there’s one of two reasons – either the network literally can't do it, or the business model is dependent on the ability to come back and upsell and drive more margin… they are very deliberately trying to sell you just enough capacity for your current needs.”

And for those London businesses who recognise that situation and want to do something about it, there’s a new company in town that believes it can make things right.