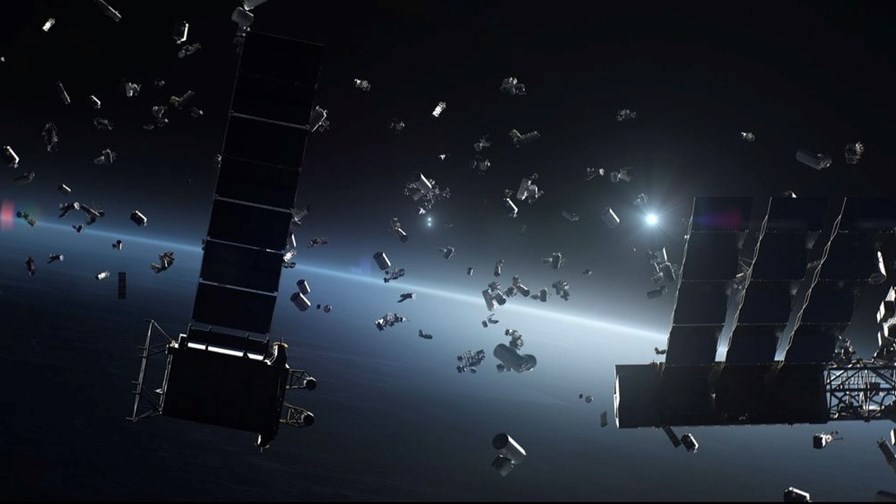 E-Space claims its LEO satellites will help to clear up orbiting debris.

If you think orbital space around the earth is already pretty crowded, think again. E-Space, headquartered in Toulouse in the Midi-Pyrénées in France, has plans to deploy 100,000 “small” comms satellites into low-earth orbit (LEO) that could be merely the first tranche of what the company claims might be a final constellation of 300,000 (yes, three hundred thousand!!) satellites.

When (and if) the first birds join the many other constellations and individual satellites orbiting the planet, it’ll be practically impossible to slip a lightly buttered Teledesic share certificate between any of them as they form a massive cluster of hurtling reflective blobs that will further degrade our already sullied view of the night sky. According to data acquisition company Dewesoft, as of 18 January this year, there were 4,550 satellites “known to be in orbit” and, of course, that number has risen over the intervening nine months thanks to the seemingly endless rush by multiple companies, including Elon Musk’s SpaceX and Amazon (with its planned Kuiper constellation), to launch their own tin cans beyond the earth’s atmosphere.

E-Space has big plans but so far has raised just $50m in seed capital from Prime Mover Lab and other investors with which to attempt to grow its almighty fleet. That pot of cash is just a drop in the ocean of funds that would be needed to execute the company’s plans. But E-Space says it will launch its first test satellites in November and begin “mass production” (which may or may not be the same as “mass launchings”) of the “micro” satellites in 2023. The company has also just appointed Karim Michel Sabbagh to be its managing director for Europe and Middle East: Sabbagh has experience in the industry, having previously been president and CEO at SES, the Luxembourg-based satellite company.

E-Space’s CEO, Greg Wyler, says the constellation will "help governments and large companies build space-based applications in a capital-light manner” for uses "ranging from secure communications to managing remote infrastructure". He claims to have filings in hand… for over 100,00 secure communications satellites” and confirmed that the system will use “a peer-to-peer communication model”. According to the blurb on the E-Space website, the constellation will be a "multi-application cloud server in space... powered by E-Space's rapidly scalable optical 5G mesh network".

Tangled up in blue

E-Space claims to be “democratising space with a mesh network of secure multi-application satellites that empowers businesses and governments to access the power of space to solve problems on Earth.” Apparently, E-Space “provides satellite constellation deployments with higher capabilities and lower cost to enable a new generation of services and applications, from 5G communications to command and control systems.”

The company adds that it “puts sustainability at the forefront, with a purposeful design that minimises and reduces debris and destruction while preserving access to space for future generations.” Well, one would hope that the design of such a massive number of satellites is indeed “purposeful” rather than haphazard and random.

Given the ever-increasing number and proximity of both operational and defunct space vehicles in orbit, and the increasing likelihood that one day there’ll be serious collisions between some of them, there is movement afoot to capture and return to earth equipment and space debris. E-Space also claims to have a solution here because its satellites are purposefully designed to clean up space.

Apparently, the E-Space birds have “smaller cross-sections” than satellites in other constellations, which makes them "much less vulnerable to collision". But if they do bang together – and remember folks, in space, no one can hear the clang – it’ll be OK because they ”will be designed to 'crumple' rather than break apart when struck”, a bit like a fender on a Volvo.

“They will also 'entrain' any debris they encounter and automatically de-orbit when a certain amount has been collected because they are further designed to drop into a high-drag configuration where they passively, and quickly, de-orbit" and "fully demise upon re-entry into the Earth's atmosphere."

One assumes they mean “burn up”, but who knows, perhaps the satellites will actually be alive and thus able to die? (Remember, in space, no one can hear the death rattle.)

Quite how the clean-up-and-dispose technology will work has yet to be explained. Instead we have Wyler’s fanciful analogy as reported in the Financial Times newspaper yesterday. “Like oysters in the river that filter the river and clean it, our satellites are the first to be designed to clean space. The more satellites we have, the cleaner space will be." We await elucidation with bated breath, fishing nets and state-of-the-art crash helmets.

Wyler is by no means a newcomer to the satellite industry. He founded O3b Networks in 2007 and Google invested in the company in 2008. In 2009, SES acquired O3b. At that point Wyler left to join Google but didn’t stay long and quickly departed to found WorldVu Satellites which, confusingly, was also also known as ‘L5’. WorldVu acquired the spectrum licence previously held by SkyBridge and planned two constellations, each of 180 LEO satellites, for commercial launch in 2019 at cost of $3bn. In 2014 it emerged that WorldVu had connections to Elon Musk, but there was no formal deal with SpaceX, and WorldVu changed its name to OneWeb. And now you see it all coming together…

In November 2014, Musk tweeted that “SpaceX is still in the early stages of developing advanced micro-satellites operating in large formations.” In 2015, OneWeb secured funding from Virgin Group and Qualcomm to build and launch a planned constellation of 650 LEO satellites. A matter of a few days later, SpaceX published its own LEO plan, focused on ISPs and backhaul with a constellation of 4,000 satellites and a commercial launch date of 2020. It seems that about that time, Musk and Wyler stopped talking to one another. OneWeb entered Chapter 11 bankruptcy protection, which it exited in November 2020. It is now under new ownership and actually launching broadband satellites, but Wyler is no longer part of that company.

Oh, what a tangled web. Almost as tangled as 300,000 micro satellites might get if things go wrong.