DT takes its mobile network to the stratosphere 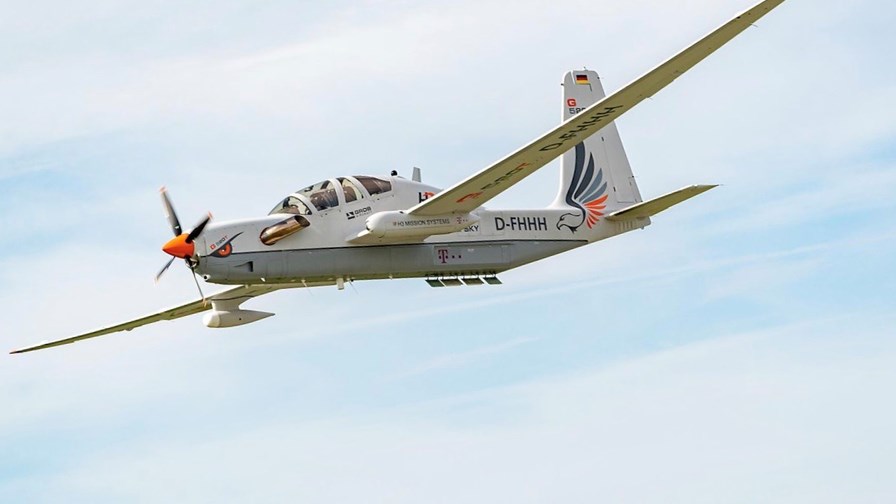 The DT flying base station developed with SPL

Deutsche Telekom has revealed plans to significantly broaden its mobile voice and data coverage by extending its cellular network to the stratospheric layers of the earth’s atmosphere using unmanned aircraft loaded with “high-flying” radio network equipment.

The operator’s CEO, Timotheus Höttges, noted during a presentation to the media on Monday morning that “with the help of an airplane, we have taken mobile [network infrastructure] to the edge of the stratosphere” in partnership with Stratospheric Platforms Ltd. (SPL), which has been developing hydrogen fuel cell-powered remote-control aircraft. (He also noted that DT’s Telekom Innovation Pool fund has invested an unspecified amount in SPL, in which it holds a 38% stake.)

The aim is to efficiently and effectively cover hard-to-reach areas (or ‘white spots’) and places where the construction of regular terrestrial mobile network infrastructure might not make sense or be allowed (for instance, in remote areas of natural beauty or protected historic sites). The aircraft would behave like a terrestrial base station and be an integrated part of the mobile network, with calls being handed off between the “high-flying” base stations and those on the ground.

And the teams at DT, SPL and its partners believe the lightweight antennas being developed for the network-extension-in-the-sky would enable one aircraft to provide mobile services over an area that would otherwise require the deployment of about 200 terrestrial macro base stations.

The partners have already conducted several test flights in Bavaria with an aircraft (drone) at an altitude of 14 km and claim to have achieved 4G/LTE connectivity for packet voice and data services of up to 70 Mbit/s downstream and 23 Mbit/s upstream to a regular smartphone device at ground level over a 10 MHz spectrum channel in the 2.1 GHz band. 5G services are planned for the future, naturally.

With regards to the technology used and being developed, SPL notes in this announcement:

The communications system on the platform consists of a ‘backhaul’ antenna which uses mm-wave into the Mobile Network Operator’s terrestrial network and a large ‘fronthaul’ antenna (over 3 metres in diameter) which provides communications services direct to a normal smartphone, laptops and other consumer devices. The next generation of development, already identified and patented by Stratospheric Platforms, will enable significantly higher spectral efficiency whereby platforms operate in conjunction with one other (rather than acting as individual ‘masts in the sky’).

With such impressive results, Höttges was keen to point out that this connectivity option was a very viable alternative to the Space X broadband satellite program backed by Elon Musk and the stratospheric balloons being used by Loon, a subsidiary of Google’s parent, Alphabet. The main competitive benefits  providing more direct and faster connectivity with lower latency and a 24x7 power source. (See Already dangerous, satellite dodgems gets more perilous by the day and As the world goes mad, send in the Loons.)

He also stressed that this is a European initiative, “not from North America or China,” with the technology R&D work having been performed by teams in the Czech Republic, Germany and the UK and said DT is looking for partners and investors that could help it take the initiative to markets outside the DT footprint.  “The US and China are decoupling from each other… Europe has to show it is in the position to develop its own strategic assets,” stated the CEO, who added that taking risks and innovating is now more important than ever. “he who does not dare has already lost,” he stated in full Hollywood script mode.

There are a lot of hurdles to overcome, though, including many approval processes, so it will be “maybe five or even 10 years” before this system might go into commercial production, noted Höttges.