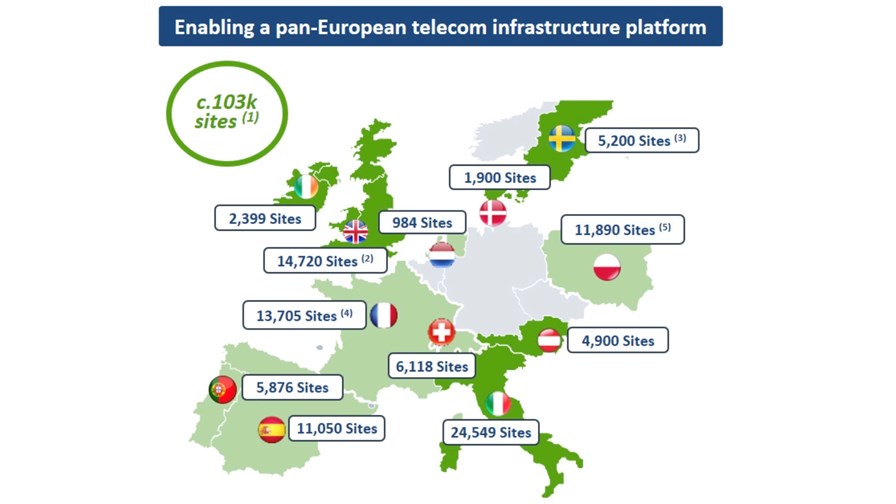 Confirming recent market speculation, European neutral host specialist has struck its biggest M&A deal to date, a €10 billion agreement to acquire 24,600 towers and sites in six countries from CK Hutchison, which has built the portfolio as owner of the 3 Group mobile operations in the region.

The agreement includes new tower builds at about 5,250 sites across Europe over the next eight years. With those planned rollouts included, Cellnex’s portfolio (once the acquisition is completed) will total 103,000 towers and sites (including planned builds), as shown in the map above.

The sites being acquired are in six markets: The sites in Italy, the UK and Ireland add to Cellnex’s existing operations in those countries; the sites in Austria, Sweden and Denmark will add new markets to the Cellnex business.

The deal, constructed as six separate acquisitions, comprises €8.6 billion in cash and €1.4 billion in stock. The stock will be issued to CK Hutchison on completion of all six transactions, and will represent about 5% of Cellnex equity.

The deal also provides Cellnex with an instant revenue stream from the acquired sites, as the 3 Group operations in all six markets will be anchor tenants for an initial term of 15 years, extendable by a further 15 years (in five-year increments).

The income from the new sites (including the planned sites) are set to increase Cellnex’s annual revenues by about €1.2 billion per year to about €3.8 billion, once these and other in-play acquisitions are completed.

The company has grown substantially during the past couple of years as a result of numerous acquisitions in Portugal, UK, Ireland, Italy and France, and just last month announced plans to acquire the towers portfolio of Polish operator Play (part of the Iliad group) for €800 million. (See Cellnex to add Play's towers to its portfolio in €800M deal.)

It has also struck a number of strategic partnerships to build out new tower sites and fiber networks, and brokered partnerships and relationships to enable neutral host edge computing and IoT services.  (See The Role of Neutral Hosts in Edgenomics.)

“The high density and capillarity of Cellnex’s network of sites, now in 12 European markets and crossing the threshold of 100,000 telecom sites, further highlights the differentiated added value of our company as a natural partner for all mobile operators in Europe to complement their capabilities in rolling out 4G and accelerating the 5G deployment,” noted Cellnex CEO Tobias Martinez in this Cellnex announcement.