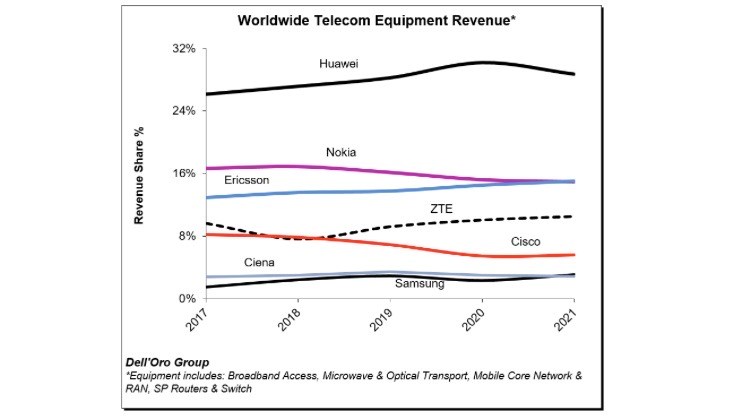 The global market for telecom network equipment grew by 7% year-on-year in 2021 to be worth almost $100 billion, marking the fourth consecutive year of overall market growth, according to research house Dell’Oro Group.

That leap in value of the market, which comprises Broadband Access, Microwave & Optical Transport, Mobile Core Network, Radio Access Network (RAN), and Service Provider Router and Switch equipment, was “underpinned by surging wireless revenues and healthy demand for wireline-related equipment spurred on by double-digit growth both in RAN and Broadband Access,” according to Dell’Oro.

Huawei is still by far the biggest supplier, accounting for about a quarter of the total global market, while Ericsson and Nokia are level-pegging at about 15% of the total market each (see the chart above).

The biggest seven vendors account for about 80% of the global market’s value, with ZTE, Cisco, Ciena and Samsung accounting for the other positions in that top ranking.

The size of the Chinese market, which is dominated by Huawei and ZTE, obviously skews the global numbers: Taking China, which accounts for about 26% of all sales, out of the equation leaves Ericsson and Nokia tied each with about a 20% share of the ‘rest of the world’ market.

But Huawei is still close behind, with an 18% share, showing that it's still a force in the international telecom kit sector despite sanctions and restrictions. “Ongoing efforts by the US government to curb the use of Huawei’s equipment is impacting the company’s position outside of China,” notes Dell’Oro’s Stefan Pongratz in his analysis of the global market. “Even so, Huawei continued to lead the global market, underscoring its grip on the Chinese market, depth of its telecom portfolio, and resiliency with existing footprints,” he adds.

But Huawei's business, while still enormous, is shrinking and its influence waning and its share is likely to continue to dip due to ongoing international pressures: It is yet to publish its annual report, but earlier in the year it announced that its full year 2021 revenues were expected to be around RMB 634 billion ($100 billion), down by about 30% year-on-year.

But its Chinese peer, ZTE, is growing, a trend reflected in Dell'Oro's chart and also in the vendor's recent financial statement. (See Despite restrictions, ZTE continues to grow.)

And there’s further growth to come for the market as a whole, believes Pongratz, though not quite at the same pace: He expects the overall global telecom network equipment sector to grow by 4% this year, despite the various negative pressures on international business and supply chains, from the chip shortage, to Covid-19, to the Ukraine conflict.