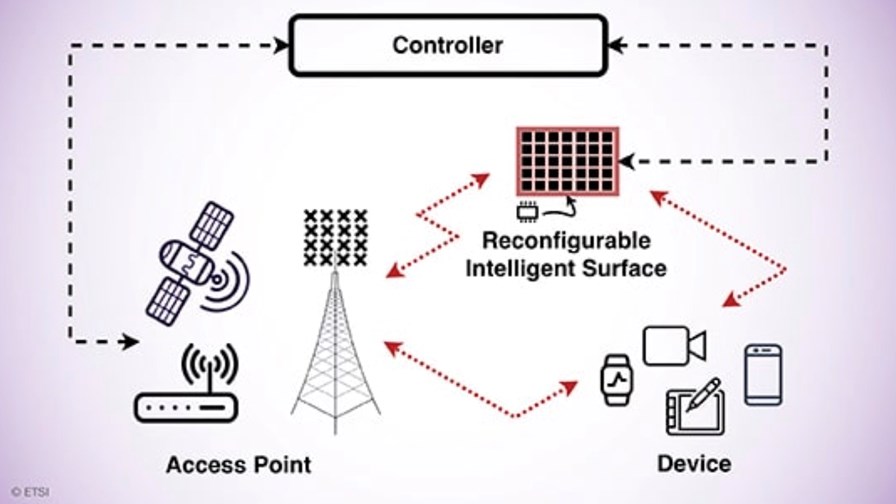 In today’s news, ETSI’s got a brand new bag (well, more a group focused on Reconfigurable Intelligent Surfaces than an actual bag, but...), Ericsson teams up on wireless-powered base stations and Sky holds the (line) cards in UK wholesale fibre broadband poker stand-off.

ETSI has formed a new group, the Industry Specification Group on Reconfigurable Intelligent Surfaces (ISG RIS), that will explore the architecture and potential of a new type of system node that leverages “smart radio surfaces with thousands of small antennas or metamaterial elements to dynamically shape and control radio signals” to suit particular applications. According to ETSI, reconfigurable intelligent surfaces could be used, for example, to “reconfigure the radio environment to sense human posture and detect someone falling, a very useful application for elderly care,” and could be used indoors as well as outdoors. RIS “is expected to serve as a key technology in future wireless systems, including for 6G.” Read more.

With energy efficiency near the top, if not straddling, the list of top 10 strategic issues at telecom sector companies right now, Ericsson’s announcement that it has teamed up with laser technology specialist PowerLight Technologies to enable “the first safe, fully wireless-powered 5G base station” (which rather suggests there have been some perilous efforts at achieving this goal in the past). Essentially, PowerLight has developed a technology called ‘optical beaming’ that “converts electricity into high-intensity light which is then captured and transformed to electricity at the radio base station,” enabling a power source without any wires on on-site power generation. Ericsson showed how this actually works recently during a proof of concept in Seattle, whereby wireless power – hundreds of watts over hundreds of metres over the air – was “safely distributed to an Ericsson Streetmacro 6701 – a 5G millimeter wave (mmWave) radio base station.” Read more.

The temperature dial for the UK’s already super-hot fibre broadband market hit ‘inferno’ levels today as speculation that Sky might team up with Virgin Media O2 on its planned fibre access network rollout and become a key wholesale anchor customer sent the share price of BT, parent of national fixed access network operator Openreach, into freefall, swiping about 8% off its value in Monday morning trading on the London Stock Exchange, reports Reuters. BT’s share price recovered, ending the day down 4.7% at 151.5 pence, once an unidentified source noted that Sky was likely to remain a major Openreach wholesale customer even if it did get into bed with Virgin Media O2, which revealed earlier this year that it plans to replace its existing cable access infrastructure with fibre by 2028, as well as extend the reach of its network, and seek out joint investment partners.

Last week we reported that videoconferencing company Zoom’s US$14.7 billion takeover of the cloud-based contact centre specialist Five9 is off because the Five9 board of directors went ahead and agreed to it without first gaining the necessary shareholder approval, which consequently was not forthcoming - quite the fiduciary and process oversight, considering the outcome. However, it seems that may not have been the only reason why the deal fell flat. US media outlets have been reporting that Team Telecom, a shadowy and “informal” committee comprised of members of the US Departments of Defense, Homeland Security and Justice, together with other unnamed “affiliated agencies,” had let it be known it had great concerns that a Zoom/Five9 tie-up could pose a risk to US national security and law enforcement agencies due to “foreign relationships and ownership” issues related to Zoom - for which read China, Russia, Iran, North Korea and a few others, but mainly read China. In a letter quietly published on the website of US telecoms regulator the Federal Communications Commission (FCC), Team Telecom announced that it was reviewing the now defunct buy-out to determine whether it “poses a risk to the national security or law enforcement interests of the United States”. Zoom’s CEO, Eric Yuan, says the aborted acquisition won’t have much impact because Five9 “was in no way foundational to the success of our platform nor was it the only way for us to offer our customers a compelling contact centre solution.” If that is really the case, it begs the question, “What was the point of being prepared to spend 15 billion bucks on buying it in the first place?” Meanwhile, Team Telecom continues to work in concert with the FCC to monitor telecoms mergers and acquisitions to ensure that those considered to be of strategic importance to the US stay out of foreign hands. They are quite busy at the moment.

And while we are on the subject of China, the ruling Communist Party is turning the screw ever tighter on the PRC’s big Internet and social media companies. The Politburo remains concerned that the likes of Alibaba and Tencent have grown far too big for their boots and is determined to cut down to size what it regards as direct threats to its hegemony. Having for 20 years allowed Alibaba et al to grow with minimal regulation or oversight, the government cracked down on them late in 2020 and now says it will pursue its campaign to bring them completely to heel until at least the end of 2025. Thus, there’s no quick end in sight and China’s ISPs and social media giants face a tough four to five years, and even longer, if they don’t kow-tow low enough, quickly enough to please the real powers that be. The government says that anti-monopoly and data security enforcement programmes to guarantee competition in an environment hitherto totally dominated by a few big and immensely rich enterprises will give consumers more choice as well as creating new jobs and further raising living standards. This is happening even as the prospects of the collapse of the huge and hugely-overstretched Chinese property behemoth Evergrande could push China into a sudden economic recession. Evergrande’s shares ceased trading on the Hong Kong Stock Exchange this very morning and with the Chinese state having lent huge sums to the company to keep the property bubble pumped to bursting point, things could go badly wrong very quickly. Nonetheless, the government has signalled that not only will it continue with its policy to exert total control over the Internet giants, but it will drive them to the wall and out of business entirely if that is deemed to become a political necessity. In the meantime, indications are that the government will levy “special” and perhaps repeated windfall taxes on social media and Internet organisations to help pay for the pivot to the production of semiconductors, robotics, AI and electric vehicles and other hardware occasioned by the sudden and unexpected lack of access to western technologies and markets following the Huawei and ZTE affairs. Curbing the power of the likes of Alibaba is central to President Xi Jinping’s “back to basics” policy whereby the “original mission” of the Communist party, as defined by Mao Tse Tung, always to lead and command economic and social development in China is reinstated and rigorously pursued. Anyone or anything standing against the reimposition of the original mission will be ground into the dust and the likely candidates now know only too well who they are. Let the kow-towing begin. Oh, it already has.

Maintaining today’s Far Eastern theme, over in South Korea, the ISP SK Broadband (which is an arm of SK Telecom, the country’s biggest wireless carrier) is taking Netflix to court, alleging it streamed so much content over SK Broadband’s network that traffic didn’t just double, triple or even quadruple but actually increased 24-fold in less than three years. Usage shot up from 50 Gbps in May 2018 and was at 1,200 Gbps last month - and rising. Although SK Broadband’s excellent network can stand the stain, the company claims that Netflix hasn’t paid for ever-increasing broadband access and network usage costs. Netflix is very popular in South Korea coming second only to YouTube. What seems to have been the last straw for SK Broadband is the runaway success of the Korean series Squid Game, wherein hundreds of desperate people, deep in debt and with many other problems, compete in a very violent and bizarre adaptations of children’s games to win one prize of some US$40 million. Those who fail, (i.e. all but the eventual single winner) are killed. Bandwidth demand associated with the series has broken all previous records and, understandably, SK Broadband wants recompense. Back in the summer, a Korean court sitting in the capital, Seoul, ruled that Netflix (and by extension other streaming content companies operating in or wanting to break-in to the Korean market, such Apple and Disney) is liable to pay for access to the network its content piggybacks upon. It isn’t the first time SK Broadband has tried to reach a legal settlement. At the time of the first case, heard in 2019, Netflix counter-sued and put forward the claim that its customers are already paying for broadband and network usage and, therefore, charging Netflix itself would amount to double-billing for a single service. SK Broadband was apoplectic and it’s easy to see why. Its case is that Netflix takes advantage of SK Broadband’s network quality guarantees and its management and maintenance skill and services, without which it would be unable to stream its content. The court agrees and ruled that the two parties must agree on a “reasonable price” to be paid for the use of SK Broadband’s network. The Netflix response? To appeal the court ruling, of course. Meanwhile bandwidth demand and network usage continues to rocket.

SingTel has advanced its “digital infrastructure growth strategy” by raising about A$1.9 billion (US$1.38 billion) from the sale of a 70% stake in Australia Tower Network, a wholly-owned subsidiary that operates the passive telecoms tower infrastructure of SingTel group operator Optus, and creating a regional data centre business in partnership with Thailand’s Gulf Energy and Telkom Indonesia that will “form part of a regional digital infrastructure platform to capture new growth opportunities arising from the digital wave sweeping Asia.” Read more.

US operator Frontier Communications is the latest operator to appoint a Digital Information Officer in the form of the deliciously-named Melissa Pint. Read more.

Building on their partnership announced in June, Deutsche Telekom and device manufacturer Fairphone have unveiled the Fairphone 4, which the German operator describes as “the world's first sustainable 5G-capable smartphone.” It is available in Germany, Austria and the Netherlands. Read more.