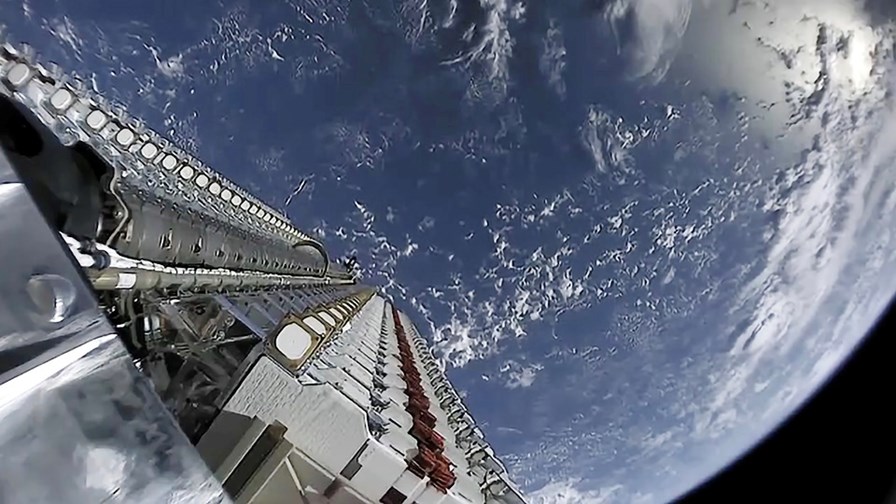 Yesterday's planned launch of a SpaceX rocket carrying a further 60 satellites for the huge Starlink Low Earth Orbit (LEO) constellation was postponed because of bad weather at NASA's Kennedy Space Centre in Florida. It was a slight set-back in the ambitious schedule to loft 1,400 satellites by the end of the year. When it is complete, the Starlink mega-constellation will comprise 4,425 satellites and provide a near-global service of high-speed broadband Internet access. Perhaps inevitably, such a huge private commercial operation has attracted the attention of the American military. The latest edition of the MIT Technology Review from the mightily prestigious Massachusetts Institute of Technology in Boston reveals that research by the US Army had shown that Starlink could be modified to provide a low-cost but extremely accurate and, to all intents and purposes, unjammable second GPS system.

The space segment of the long-established US-owned Global Positioning System consists of 32 satellites of which at least 24 are in constant operation. They orbit at 20,000 kilometres out from Earth and continuously broadcast back a radio signal specifying their position and an exact time signal as provided by an ultra-accurate atomic clock. Ground receivers check and compare how long it takes the signals from the multiplicity of satellites sending them to reach terra firma and then calculate their position relative to the Earth. The civilian version of the GPS, available to all, is accurate to a few metres: The sequestered and secret military version is known to be more accurate still.

The main problem with GPS is that the satellite signals, on which the US armed forces and other agencies are very reliant, are greatly attenuated by the time they are received by earth stations and can easily be disrupted or blocked altogether by natural background interference and noise or deliberate jamming on the part of the electronic warfare departments of hostile states including China, Iran, Russia and North Korea. The Pentagon has been looking for a GPS back-up, ancillary system or substitute for quite some time and originally planned to use the ageing 66 LEO satellite Iridium voice and data system as a less accurate emergency back-up to the GPS. Obviously a more modern constellation of thousands of satellites would be a preferable alternative, and that is exactly what Starlink will provide.

Ten times better than GPS and nearly impossible to jam

The MIT Technology Reviews says that Todd Humphreys and Peter Iannucci of the Radionavigation Laboratory at the University of Texas at Austin have devised a software solution that would see modified GPS signals piggybacking on Starlink satellites and providing very precise location data "up to 10 times as good as GPS, in a system much less prone to interference."

When signals from LEO satellites reach earth stations they can be as much as 1,000 times stronger than those from the much more distant GPS satellites. However, in a time of crisis or war, LEO satellites would be prime targets, as they are comparatively easy to disrupt or destroy. Because of its sheer size, the Starlink constellation of close to four-and-a-half thousand cross-linked satellites orbiting at 1,100 kilometres would be more difficult to put out of action completely in a space war and also provide considerable redundancy in the event of some satellites being destroyed.

Humphreys and Iannucci reckon their solution, which they call "fused LEO navigation," will provide greater accuracy for civilian users of the GPS as well as the military. This is because the GPS receivers on the satellites of the Starlink constellation are equipped with advanced computer power to process, in space, algorithms that are far in advance of those found in products designed for the consumer market. This enables much improved location accuracy to within centimetres rather then several metres and all the hard computing work is done in orbit.

As far as the US military is concerned, fused LEO navigation is inherently much more difficult to jam or counterfeit than current navigation systems. Signal interference and spoofing becomes harder, almost to the point of impossibility, because signals are so much stronger at ground level and the system's microwave antennas are massively more directional that GPS antennas. Genuine signals get through whilst fake ones from jammers don't.

What's more, the two University of Texas scientists say, fused LEO navigation will provide robust, highly redundant, continuous and improved navigation services to 99.8 per cent of the world's population while using "less than one per cent of Starlink's downlink capacity and less than half a per cent of its energy capacity." If that pans out as promised it will be astonishing.

Fused LEO navigation isn't a universal nostrum, though: It does have some limitations. For example, the first iteration of Starlink will not operate at latitudes above 60 degrees, north or south, which means that huge swathes of the far north of North America, including Alaska and Canada, Greenland, Norway, Sweden, Finland and Russia will not be able to use it. Neither will it cover Antarctica. However, plans are already in place for Starlink to be expanded to cover the entire globe.

Perhaps the biggest drawback will be cost. GPS chips for smartphones and watches are now cheap and while the satellite software upgrade may well be comparatively inexpensive, using SpaceX's futuristic Starlink antennas will be pricey, as will new microprocessors for new devices. The corporation's CEO, Elon Musk, has made no bones about pricing Starlink services high. The whole project is monumentally costly and Musk wants to make the quickest possible return and big profits from his investments to help fund his ultimate ambition, which is to build a viable permanent human colony on the planet Mars by 2030, at the latest,

All other ambitions pale into insignificance compared to that.