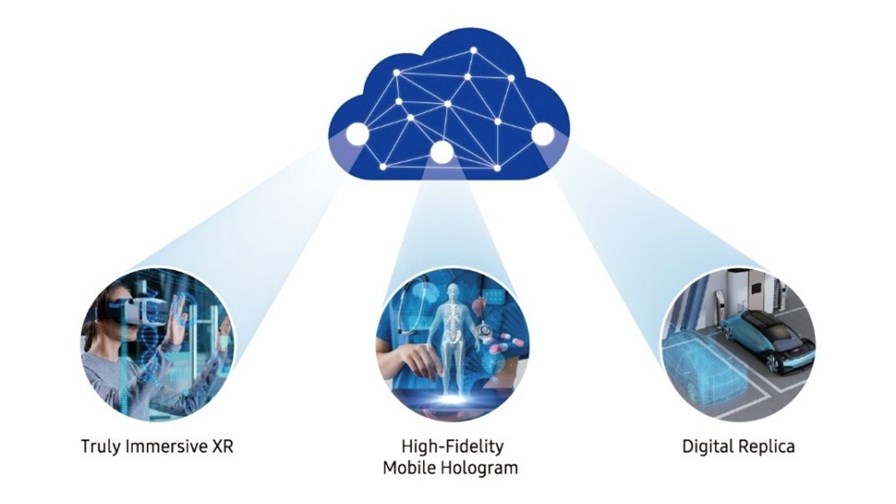 Global technology giant Samsung Electronics has unveiled its vision for a 6G era of mobile holograms and immersive extended reality (XR) in a white paper that stresses the importance of extending spectrum availability and researching multiple ‘candidate technologies’ to unlock the full potential of the future communications technology.

In its ‘6G Spectrum: Expanding the Frontier’ paper, the company has identified a need for obtaining spectrum with ultra-wideband contiguous bandwidth, with a range between hundreds of MHz to tens of GHz, if companies are to develop novel services such as “high-fidelity mobile holograms and truly immersive extended reality,” which will require ultra-high-speed communications to enable quality of service.

As greater coverage requirements are also expected in the 6G era, the South Korean company recommended all available bands to be considered for use – from low-band under 1GHz, to mid-band in the 1GHz-24GHz range and high-band in the 24GHz-300GHz range.

In addition, Samsung’s research emphasised the need for new bands to be secured for commercial deployments of 6G, as 5G networks will still be in operation when the next-generation technology is introduced. Samsung has identified potential within the mid-band 7GHz-24GHz range for “faster data speed and reasonable coverage”, and in the sub-terahertz (sub-THz) band in the 92GHz-300GHz range to support “ultra-high speed data rate”.

The white paper also suggested the potential for repurposing (so-called ‘refarming’) bands allocated for 3G, 4G and 5G mobile services so that all frequencies can eventually be deployed to meet the needs of 6G applications.

Samsung also urged for research into “forward-looking regulations and technologies” on spectrum utilisation, claiming this is “essential” for supporting 6G and related services.

The South Korea-based tech giant also shared insights into the technologies that could enable the 6G era:

Sunghyun Choi, EVP and Head of the Advanced Communications Research Center at Samsung Research, reaffirmed the company’s commitment to “taking the lead” in understanding, developing and standardising 6G. He added that Samsung’s vision entails bringing “the next hyper-connected experience to every corner of life.”

His comments follow up on colossal investment plans the company unveiled in August 2021, which include pouring $205 billion into futuristic products and innovations tailored for the 6G era. (See Samsung’s mammoth investment plans include 5G/6G.)

SoftBank is another good example of a big-name company eyeing a pioneering and leading role in the 6G era, while investments have been made and R&D efforts underway in Finland, the US, Japan and Germany.