Will the US gain first-mover advantage with new 5G frequency bands? 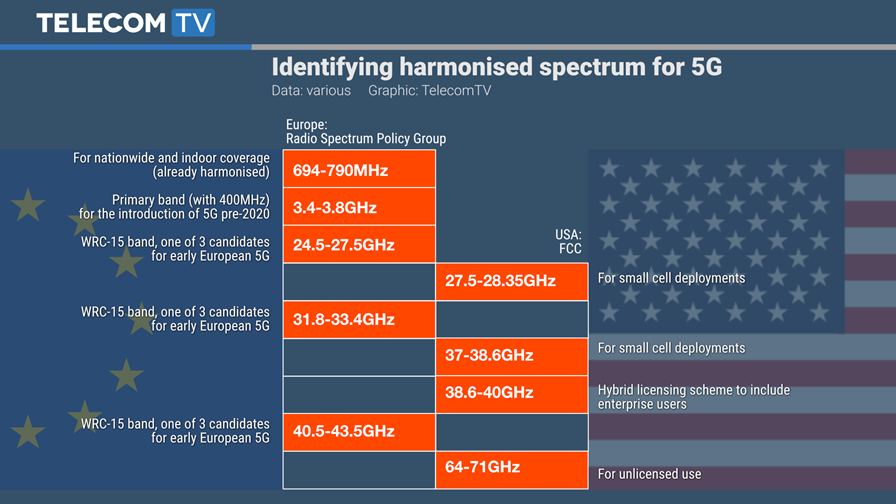 I was asked the other day if we were about to enter another “mobile war” between the US and Europe as testing for 5G systems picks up pace, similar to the WCDMA and CDMA-2000 spat that characterised 3G development. No, was my unequivocal answer. The situation is very different this time.

However, what we might be seeing is the US trying to take a head start on higher frequency spectrum allocation – so-called cm and millimetre wave frequencies of 6GHz to 100GHz. The sub-6GHz frequencies were discussed at the last WRC international spectrum conference, but frequencies higher than this will not be debated at global governmental level until the next WRC event in 2019.

Of course spectrum is already shared by, and often licensed to, numerous other users, and clear bands will need to be located for 5G and harmonised internationally. How many bands is a moot point, and after all LTE operates over about 46 different bands (although there are only half a dozen main bands), but we are talking about potentially a much larger range of frequencies for 5G, as we move into the higher frequency areas.

Above 60GHz the air is a lot clearer though. The 60GHz band (frequencies between 59.4GHz and 63.7GHz) has almost worldwide availability, so more chance of harmonisation and a less fragmented scenario than for LTE.

There is also no ready-made air interface technology that can be used for mobile systems operating in the new proposed frequencies with the low latency and high throughput requirements of 5G. Plenty of lab work is being done around the world using a multitude of coding techniques and related technologies (as we featured in our companion article on waveforms today).

The US makes its move

This work is also now leaving the lab and entering limited field trial stage – way before 3GPP have even begun to discuss standards that will meet the ITU’s IMT-2020 requirements. Which is why the US government, through the FCC regulator, is pushing for its vendors and operators to get a head start with mmW 5G by unilaterally identifying new spectrum in the US and moving forward with early auctions. The FCC has already allocated temporary spectrum licences to its mobile operators for field trials, which are well underway.

Just yesterday, the US CTIA industry organisation published a document calling on the FCC to hurry up and release more spectrum – which, to be fair, is a regular campaigning message, especially in the US. This time, it is using 5G as its main argument:

“To deliver on the promise of 5G and IoT, the Federal Communications Commission should act this summer to provide access to new high-band spectrum,” wrote CTO Thomas Sawanobori and Paul Anuszkiewicz, VP of Spectrum Planning. “To meet new demand and maintain US leadership, policymakers must move quickly to allocate new spectrum [in] bands above 6GHz.”

Doing so, they argue, would “establish a spectrum environment conducive to 5G investment.” They want the FCC’s Spectrum Frontiers proposed order to license the 28GHz, 37GHz and 39GHz bands (already identified by the FCC, as you can see on the above graphic) on an exclusive-use, flexible-rights licensed basis, avoiding experimental sharing or other non-exclusive access arrangements. In other words, keep it cellular and out of the hands of those developing new, innovative uses of spectrum – they can stick to the 64-71GHz band.

So where does this leave the rest of the world? Europe has this week countered with its suggestions, via a new consultation document from the Radio Spectrum Policy Group (RSPG) – the high-level advisory group created by the European Commission to assist it in the development of radio spectrum policy, and which comprises senior representatives of the European Member States.

To help develop a strategic roadmap towards 5G for Europe, the RSPG was requested to assess the spectrum related aspects for 5G in the long term, consider aspects related to system architecture, identify and analyse spectrum related challenges, and then assess appropriate frequency bands for 5G, in particular additional bands above 6 GHz.

However, with the deadline for the European Commission 5G Action Plan looming, the RSPG has decided to deliver its early opinion now, with a more detailed analysis due later.

It is highly likely that the first major commercial deployment will be based on lower frequencies. However, the implementation of frequency bands above 24GHz is still required to ensure all the performance targets of 5G can be met.

The RSPG recommends that the 3,400-3,800MHz band should be the primary band suitable for the introduction of 5G use in Europe, even before 2020, noting that this band is already harmonised for mobile networks and consists of up to 400MHz of continuous spectrum enabling wide channel bandwidth. It adds, probably for the benefit of its counterparts in the US FCC: “This band has the possibility to put Europe at the forefront of the 5G deployment”.

The RSPG also believes that 5G will need to be deployed in bands already harmonised below 1GHz, including particularly the 700MHz band, in order to enable nationwide and indoor 5G coverage. So long as they are fit for purpose and compatible with 5G.

But there are also many frequency bands above 24GHz which are of potential interest for 5G in Europe, and the RSPG aims to identify the most suitable band for European use. The individual EU Member states are now drawing up plans to see what work would be involved in enabling access to each candidate band in their country. However, the RSPG believes that global harmonisation will be essential for developing 5G.

It also maintains that considerations of bands above 6GHz should be limited to the bands listed by WRC-15 in order to strengthen the global harmonisation opportunities. This work should focus on the frequency bands proposed by Europe, in particular the bands:

The RSPG intends to identify which one of these could be harmonised in Europe for early implementation.

We’ll look at Asia-Pacific and other regions as and when they publish their plans. The picture here is more unclear and fragmented. Japan wants to use the whole of the C-band spectrum, but there does appear to be common ground between Japan, Australia, South Korea and China in the higher 59-63GHz band, although China is also looking at 45-50GHz.

Yes, it looks messy, but the industry wants a far more harmonised approach than we have for LTE. As usual, those countries who make the first move and whose operators get vendors to manufacture to their specifications, will inevitably have more influence come WRC-19.