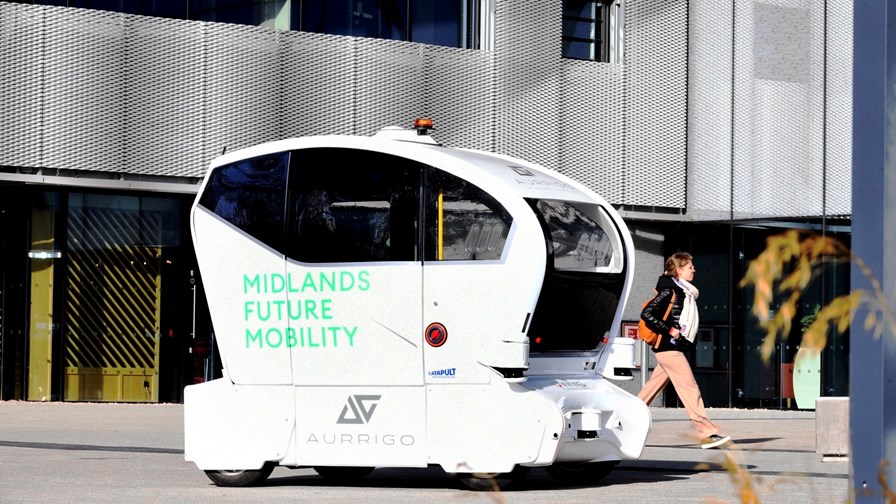 The latest developments at UK national operator BT and a new telco relationship for Zoom are at the top of today’s news pile.

BT has teamed up with the University of Warwick and Warwickshire County Council to deploy what the telco is calling the UK’s “first dedicated public 5G network for a connected campus, bringing ultrafast 5G mobile coverage to University students, staff and visitors across the 720-acre site and to people in surrounding areas through its EE mobile network.” BT hopes the move will “bring 5G innovation and co-development to the University campus and the wider region, stimulating regional economic growth and post Covid-19 recovery.” As part of the work planned on the site, BT and its partners will be seeking to better understand the “behaviour and movements of connected autonomous pods” (pictured above). See this press release for more details.

Deutsche Telekom is the latest telco to strike a resale deal with Zoom and provide customer support for enterprises using the conferencing service (if booked via DT). “With Telekom, our sales ecosystem is growing to include a strong partner with excellent market knowledge, extensive experience and an established name,” stated Peer Stemmler, Head of DACH (Germany, Austria, Switzerland) at Zoom. “We are pleased to reach completely new target audiences through this partnership, small and medium-sized businesses, for example.” UK national operator BT announced earlier this month that it is offering Zoom as a managed service.

Swedish telecom software supplier Enea has deployed its policy manager on the Amazon Web Services (AWS) public cloud for an as yet unnamed Tier one South American mobile operator. The solution provides Policy and Charging Rules Function (PCRF) for 4G and the Policy Control Function (PCF) for 5G. Enea is the latest in a growing list of companies making their applications available via public cloud platforms, a trend also being accelerated by the investments of big tech providers such as Microsoft, Google and IBM as well as AWS, all of which are developing specific solutions for telcos. Enea says its software simplifies “container orchestration” on public clouds, “allowing applications to run smoothly and efficiently across diverse computing and cloud environments” and “giving operators the flexibility to connect best-of-breed solutions for 5G core networks.” It claims the Enea Policy Manager is interoperable and platform agnostic and has already been deployed by some of the world’s largest Tier 1 operators. Find out more in this press release.

This is not a good week for those companies planning an IPO… First Mavenir wrapped its IPO plan in mothballs, and now Ant Group, the company behind mobile payments platform Alipay, has had its plan for a $34 billion flotation on the Shanghai and Hong Kong exchanges this week halted due to “major issues” identified by financial regulators, reports the BBC.

AT&T has closed the sale of its wireless and wireline operations in Puerto Rico and the US Virgin Islands to Liberty Latin America for $1.95 billion. The transaction includes: employees; network assets and spectrum; real estate and leases; customers, including more than 1 million wireless subscribers; and contracts. AT&T will retain DIRECTV and certain global business customer relationships and FirstNet responsibilities and relationships. See this announcement for more details.

Radcom, the Israeli developer of cloud native network monitoring technology, is the latest vendor to get the call from next gen mobile network operator Rakuten Mobile, which has built a virtualized 4G and an Open RAN 5G network in Japan. Radcome says it will “deploy its cloud-native, containerized assurance solution - RADCOM ACE - and its smart, patented, load-balancing technology to provide Rakuten Mobile with end-to-end 4G and 5G service assurance.” The news comes only days after French network planning software firm Infovista became the latest supplier to bask in the reflected glow of Rakuten’s rollout. For more on Radcom’s deal, see this press release.

From one greenfield Open RAN poster child to another… DISH, which is building a new 5G network from scratch based on Open RAN technology has been applauding partner Intel for its technology prowess, noting that the chip giant has been working in harmony with the likes of Mavenir, Altiostar, numerous server vendors and more to help DISH plan and develop the best network based on the likes of Intel’s vRAN Dedicated Accelerator ACC100 and its FlexRAN software reference architecture. Read more.

IoT tech firm Communications Systems Inc. has announced the availability of a Private LTE-as-a-service offering to enterprise customers. The service has been developed by Communications Systems’ subsidiary Ecessa in partnership with UK private network specialist Quortus, in which Communications Systems invested an unspecified sum earlier this year. The main thing that enterprises want from any private wireless network deployment is simplicity, so if they can get it ‘as-a-service’ that’s going to seem like an enticing proposition, depending, of course, on the terms and conditions (including the cost). Read more.