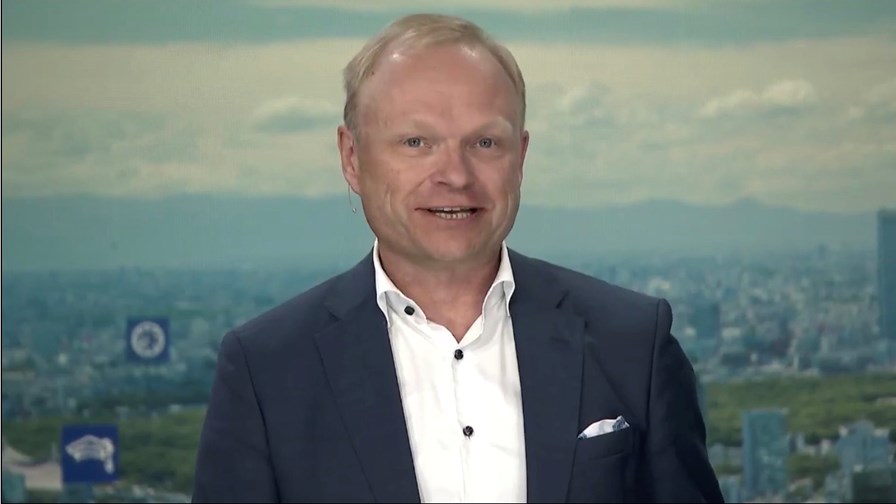 Buoyed by its better-than-expected performance during the first half of this year, Nokia has increased its projected full year revenues by €1 billion, increased its operating margin forecast to around 11% from 8.5% (mid-point of ranges published) and shared its belief that the vendor’s total addressable market (TAM) – basically, the value of the business it is chasing with its current portfolio – is growing faster than previously expected. (See Nokia fixes its sights on further growth after strong Q2.) 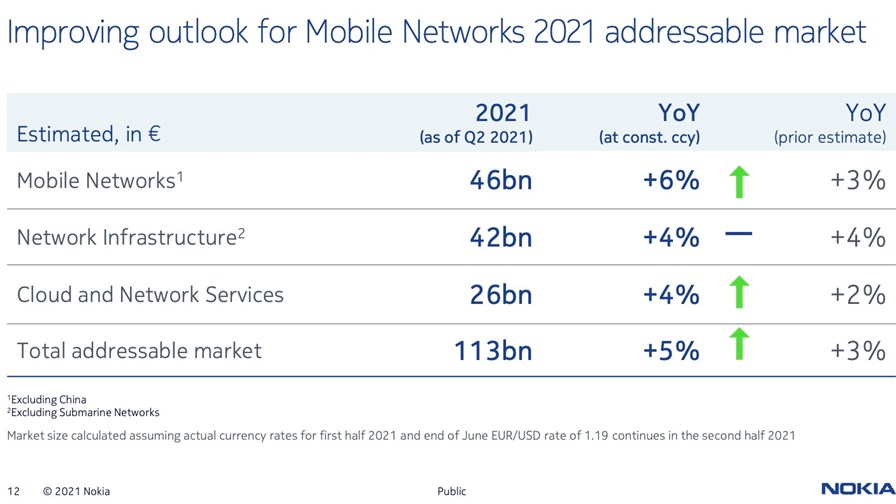 Nokia CFO Marco Wirén said during the vendor’s second quarter earnings presentation that the increase in TAM growth rate “has primarily been driven by mobile networks, where we have seen rising investments in 5G.”

For its Mobile Networks division, the vendor believes the TAM will grow in value by 6% to €46 billion (compared with 3% growth previously forecast) and that’s excluding China, where Nokia has just picked up some 5G radio access network business for the first time.

During today’s second quarter earnings call, CEO Pekka Lundmark noted the vendor, which has been playing catch-up with its main rivals in the 5G radio access network market while it upgrades its portfolio with products based on its own ReefShark SoC, had been “targeting full portfolio competitiveness through 2021. The launch of our new AirScale radio and baseband product platforms at the end of June was a major piece of that… We expect to have largely caught up with the competition by the end of the year, and… in some areas we could even lead the market.”

As for China, Lundmark isn’t getting too excited just yet: “We were recently awarded 4% market share in the China Mobile and China Broadcast Network 700 MHz 5G joint bid, positioning us as the third [largest] vendor” in terms of business awarded, a long way behind Huawei and ZTE which as usual picked up the vast majority of the business. “We believe this is a good endorsement of our improved product quality,” said the CEO, but later added that “the Chinese market is highly competitive, and typically with this type of deal the margin is lower in the beginning and then there is an opportunity to increase over time. But of course this is 4%, there's not more. It's 19,200 base stations, so you have to put it into perspective.”

For the fixed access, IP routing, optical and submarine sectors covered by the Network Infrastructure division (the star performer in terms of growth this year), the TAM growth rate hasn’t changed – it is still at 4%, which puts the TAM value at $42 billion, and that’s still a lot of business to chase. (Keep in mind also that the TAM number does not include Submarine Networks, which generated revenues of €226 million in the second quarter, up by a massive 73% year-on-year).

“We have seen an extremely strong growth in this business group in the first half with growth driven by all the businesses,” noted CEO Lundmark. “Our fixed networks business continues to benefit from what we believe is a structural shift from operators across the globe to increase home broadband connectivity. This has been accelerated as many workforces are likely to move to hybrid home office working model in the future: Nokia will actually be doing the same. We have also seen a significant, accurate acceleration in demand for our fixed wireless access solutions. I would also note that we are seeing good market share momentum in many areas of network infrastructure. This has been key to enabling our growth performance this year, and we have continued to work hard to deliver on our customers’ increasing demand, despite the global semiconductor shortage…. we feel confident about our midterm opportunities as we see a strong opportunity pipeline which, combined with new product launches to come in the second half of the year, should increase our product differentiation further.”

CFO Wirén noted during the earnings presentation that “we are aiming to increase our inventories, specifically on the semiconductor side as we've seen that supply is quite tight and it’s good to have more buffers here.” He even added that Nokia “would be able to grow faster if more components were available,” hinting at pent-up demand.

And when questioned about whether the Network Infrastructure division could continue to grow, or whether this was a short-term jump in business driven by the pandemic-induced shift to home working, CEO Lundmark noted: “We believe there is some kind of structural underlying change in the market, especially the home broadband connectivity, and then we are starting to see the effects of the 5G deployments also, [as operators] need connectivity for base stations – all that capacity that is needed there is boosting the IP and optical networks market, and there are reasons to believe this trend will continue. And when you then move to the next phase of the mobile network development, when the small cells and millimetre wave radios start to get more common, you will need even more capacity in base station connectivity. So, we are optimistic about the structural development of this market.”

Questions were also asked by financial analysts about how much incremental business Nokia is winning as Huawei gets squeezed from certain markets, but Lundmark wouldn’t get drawn too far on the topic, saying only that Nokia is picking up “about 50% of such opportunities but we are not quantifying how much that would be” in value.