Nokia pulls up its SoCs for 5G 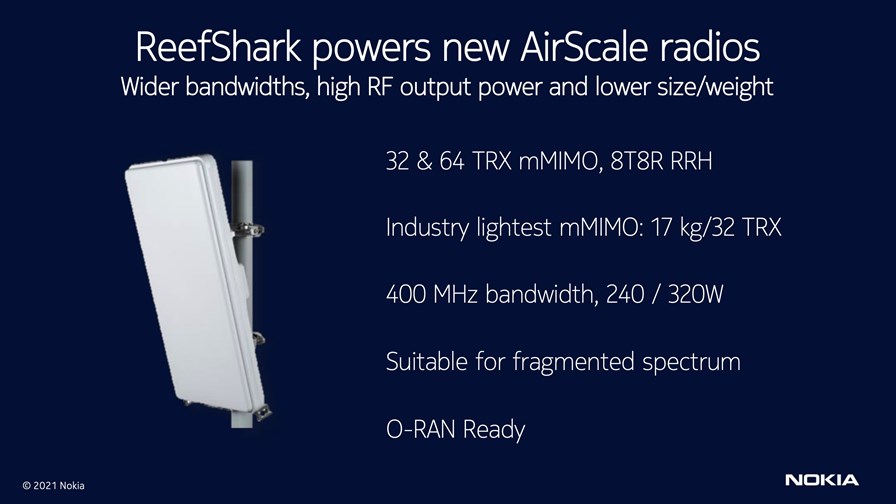 With much of the industry already sporting their virtual Barcelona badges and ready to check out the sector’s latest developments, Nokia has obliged with a new set of products for its AirScale 5G range that are all based on its in-house ReefShark System-on-Chip (SoC) component. It has also added 5G support to its Single RAN software, a move that will simplify multi-mode deployments.

The new products include AirScale massive MIMO antennas – 32TRX and 64TRX products – and 8T8R remote radio head solutions, all of which can be used in an Open RAN rollout with just a software upgrade. Nokia claims the 32TRX product, at 17kg, is the industry’s lightest. Importantly, both the new 32TRX and the new 64TRX massive MIMO antennas support fragmented spectrum and network sharing cases, increasingly critical considerations for network operators. (See this Nokia announcement for the full details.)

And there’s a sustainability angle to Nokia’s story too: The new antenna and radio products “have significantly lower power consumption [than previous models], which is critical in two ways,” says Tommi Uitto, the vendor’s President of Mobile Networks. “The electricity bill is typically one of the biggest opex items for any operator, and base stations are consuming most of the power of mobile networks. And it's our responsibility to reduce the CO2 emissions per gigabyte transferred over the air… The new networks are carrying more and more traffic [so we need to] reduce dramatically the energy consumption.” These new products will be available towards the end of the year, says Uitto.

The vendor has also developed new baseband plug-in cards for its AirScale System Module, which Nokia says “deliver up to eight times more throughput [84 Gbit/s] and serve up to eight times more cells compared to previous generations… [and] reduce power consumption by up to 75%,” a dramatic number but helped tremendously by the lack of power-hungry FPGAs. Up to 90,000 connected users can be supported simultaneously, claims the vendor.

And this is where Uitto feels confident enough to take a swipe at his biggest rival. The new baseband product is “more scalable than some of our competitors’, in particular Ericsson… they have that pizza box design, where they have just one box that has the different processing functions. The problem with that is that, in reality, when 5G traffic grows, the layer one and layer two computing needs grow faster than layer three and transport… [Nokia and] Huawei have a better architecture in that we keep the layer one/layer two board separate from layer three and transport. So when our customers need more capacity, they just need to buy the layer one/layer two board, and they don't have to pay for the layer three and transport capacity they don't need. It's also scalable in the sense that you can just add new plug-in units instead of changing the whole module.”

That the new products are based on the ReefShark ASIC, which has been designed using technology from Broadcom, Intel and Marvell, is important because it makes Nokia more competitive with its rivals such as Ericsson, Huawei and Samsung: It’s well documented that the Finnish vendor set itself back in the 5G market with its original FPGA component selection and has been playing catch-up for the past few years while scrambling to hold onto customers and RAN market share (which is currently around 25-27%, according to Nokia).

Uitto is candid about the situation. “One of the things we've been working on so hard over the past two years is renewing the processor base…  we have been relentlessly developing [the ReefShark SoC] because Nokia ended up in the 5G era without any System-on-Chip for 5G layer one, or beamforming, or eCPRI,” he says, adding that by the end of the year about 70% of shipments will be products based on ReefShark.

“Despite the early difficulties with the products, we already have 165 commercial 5G deals in terms of supply agreements, then if you add all the paid pilots and trials it would be over 220, and already 66 of the of the networks have been launched,” says Uitto, who notes that the 5G market is still in its early phases and “has 10 more years to go.”

And with these new products and the Single RAN software that now supports all generations, Uitto feels like this “marks the end of our catch-up… these products are power by ReefShark, so no more power-hungry FPGAs driving up the cost, size and power consumption. This is now a fully-fledged Single RAN, including 5G, with common transport, common operations, common everything.”

So Uitto and his team are pretty pumped about these developments, but is this a significant step for Nokia and its customers?

Heavy Reading Principal Analyst Gabriel Brown reckons so. “This is the first major radio-related product launch since Tommi Uitto took over as Head of Mobile Networks, and, on paper, it looks very competitive,” notes Brown, who adds that this is also important for the broader market. “With a limited choice of suppliers for high-performance 5G RAN, it’s important for operators that Nokia has a strong 5G RAN offer. The new portfolio won’t fully roll out until early 2022, but nevertheless it looks well timed for C-Band deployments in the US and for the expansion of mid-band 5G and 5G-capable Single RAN elsewhere,” adds the analyst.