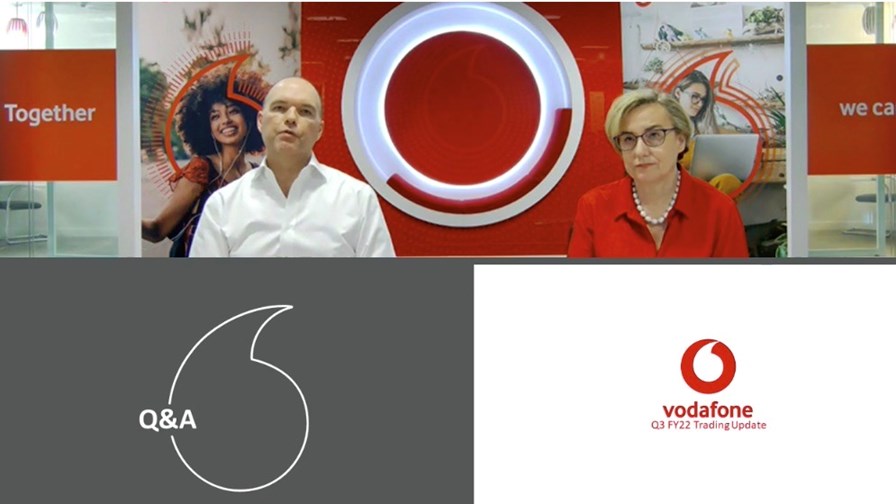 Vodafone CEO Nick Read addressed M&A speculation head on during his company’s fiscal third quarter trading update today, saying the operator is engaged with other companies on potential mergers and asset sales in multiple markets. Importantly, he added that politicians and regulators across Europe are now more in tune with the economic and operational dynamics of the telco sector and that this could lead to a “new reality” in terms of market consolidation potential.

Vodafone has been at the heart of much M&A speculation in recent months following hints by Read (and other European telco CEOs) that options were being considered, local reports on consolidation discussions involving Vodafone in multiple markets, and following reports that an activist investor, Cevian Capital, has taken a stake in the operator and is leaning on the company to optimize its portfolio of operating companies.

The local speculation has, in the past few weeks, linked Vodafone UK to fellow mobile network operator Three (not for the first time) and Vodafone Italy to Free, which is part of combative Iliad group that initially made its mark in France and which is still expanding its empire.

And then today, news from Spain emerged, in the El Confidencial newspaper, that MásMóvil is keen to acquire Vodafone Spain and that talks are underway. MásMóvil, of course, has only just bulked up in recent times courtesy of the acquisition of Euskaltel. (See MásMóvil ready to bring in the brands as Euskaltel bid clears final regulatory hurdle.)

During the Q&A session Read held today alongside Group Chief Financial Officer Margherita Della Valle, he noted that “disposals, acquisitions and combinations” have been a part of the company’s strategy for the past three years, so current engagements and activities are nothing new or unusual, stressing the comp any has been “pragmatic and open-minded” in any asset considerations.

Right now he said the key M&A considerations have been focused on: Transferring the Egypt operation into the Vodacom Group (a deal that is all but done and set to close soon); checking out the potential for an “industrial merger” for Vantage Towers, the standalone but majority-owned towers company that could do a deal with either Deutsche Telekom or Orange’s Totem towers unit; and in-market consolidation.

There “isn’t much we can say on in-market [consolidation] but we are very proactive and very pragmatic and getting good engagement from our counterparties to advance this,” noted the CEO, saying that discussions have been held with multiple parties. “Our goal is to ensure we have a set of strong assets in healthy markets delivering strong returns for our shareholders,” noted Read.

Key for Read and Della Valle in revamping the asset base in any market is achieving what the CEO calls “local scale,” which is as important as “regional scale.” And in multiple markets, which Read identified as the UK, Italy, Spain and Portugal (where he said the regulator had introduced two new entrants instead of the intended one to make the potential for scale even harder...), there are four infrastructure-based mobile network operators and multiple large MVNOs that make those markets “hypercompetitive.”

He added: “We are talking about [moving from] four infrastructure MNOs to three in those markets to get the right economics for scale and returns. The argument is not about whether we want competition – we are the challenger against incumbents, we are pro competition, but we want a new balance, of competition versus encouraging investment, and we think that is a very positive narrative for member state politicians and Brussels, and we think the countries and sector is leaning into the agenda. This is not about needing rule changes – the EC already has enough flexibility, and I think there is a new reality, a new economic context,” stated Vodafone’s CEO, who believes politicians and regulators now see the communications services sector in a different light after two years of Covid-19 and the realization of how important it is that markets have thriving service providers that can invest and deliver the services that companies and individuals need in a digital economy that now has many more remote workers. European telecoms “is a highly fragmented sector in multiple markets,” in contrast to many other markets around the world.

And there has been a sense for some time that M&A is likely to feature strongly in Europe’s operator community this year. (See M&A set to change Europe’s digital comms landscape in 2022.)

In the meantime, Vodafone is managing sales growth: In the third quarter of the fiscal year, ending December 2021, the operator generated revenues of €11.68 billion, up by 4.3% from the same period a year earlier.