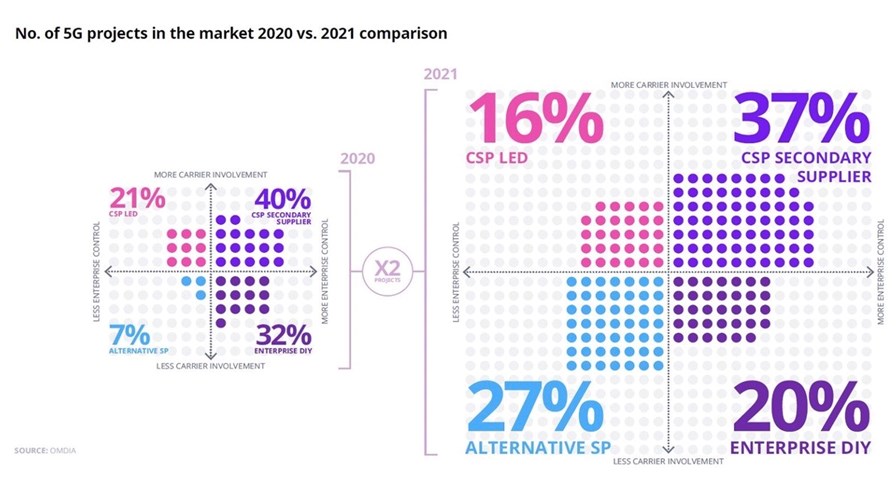 Telecoms operators recognise the importance of serving the potentially lucrative enterprise 5G market, but they are not yet fully equipped to do so: As a result, they are losing out to alternative players and even to enterprise users themselves, according to a new industry report.

Communications service providers (CSPs) are the lead partners in just 16% of the 600+ enterprise 5G projects identified globally up to and including Q1 2021, down from 21% a year earlier (see chart above), according to the second annual enterprise 5G report from BSS provider Beyond by BearingPoint, which is based on research conducted by analyst firm Omdia. That decline comes in a market in which the number of enterprise 5G projects doubled during the 12 months to the end of March 2021, a stat that makes pretty gloomy reading for the operators.

Meanwhile, alternative service providers, such as private network specialists, have ramped up their efforts and are outpacing telcos, scooping up the lead partner role in 27% of enterprise 5G projects, a figure that represents significant growth from 7% a year earlier. The report indetifies Finland's Edzcom as one example of an 'alternative SP,' highlighting its high-touch approach, precise vertical focus and clear market segmentation; Edzcom was acquired by towers and neutral host specialist Cellnex Telecom this time last year, incidentally. (See Cellnex adds private networks know-how to its armoury.)

"Overall, its strategy adapts to what the customer wants – it has a deeper vertical understanding and it does not need to balance diverse company priorities like the larger players do," the reports notes.

To fill out the picture a little more, enterprises themselves take the lead role themselves in 20% of all enterprise 5G projects, with big firms in particular going down the DIY route and seeking to take full ownership of, and responsibility for, their 5G network solution. But that figure is in decline – it stood at 32% last year – as more companies recognise that they do not have the resources or expertise in house to do it themselves.

That should leave an opening for telcos, but – as the figures show – they are not currently taking it. A year ago the previous report showed that more than 72% of CSPs believed that most 5G revenues would come from B2B, B2B2C, or government/smart city opportunities. That being the case, if they fail to capture the enterprise opportunity, their 5G ROI figures surely start to come into question.

The telcos are changing, but will they be fast enough?

According to Beyond by BearingPoint, for telcos it's all about understanding that enterprise 5G is an ecosystem play – they need partners, basically. They have changed their thinking, launched new strategies and partnered up, but are not moving at the speed of enterprise demand.

"CSPs understand the opportunity, but their determination and speed are lacking," according to Angus Ward, CEO of Beyond by BearingPoint. He calls upon the telcos to "stop hesitating" and continue to work with partners, even when they are not in full control of the product or solution.

And that's quite a lot of the time: CSPs were involved in 37% of 5G enterprise deals as a secondary supplier this year, down from 40% last. In this model, which often involves vendors working with the enterprise, it is not unusual for the telco to be relegated to the role of connectivity provider. However, despite the fall, there is a big opportunity here, because having a foot in the door gives them the ability to upsell, offering services such as security or integration.

Admittedly, though, telcos are not always the service provider of choice for enterprises.

"CSPs need to prove their prowess in security, network architecture and design, and demonstrate commercial creativity to win the trust of enterprises to do more," said Evan Kirchheimer, Research Vice President, Service Provider & Communications, at Omdia. Once again, partnering is the solution; telcos will need to form new relationships and think more creatively to be able to monetise their tech assets and expertise, Kirchheimer said.

Despite the laundry list of things telcos 'need to' do to take a bigger slice of the enterprise 5G market, all is not lost. Beyond by BearingPoint believes there is still time for telcos to make their mark.

"Despite the headline figures, we remain optimistic about the ability of CSPs to turn the situation around. The 5G enterprise game is far from over," said Ward.

And "still more now understand the need for a multi-technology, omni-partner, solution-oriented and verticalized approach for enterprise 5G," Ward says. "This is really encouraging. But as an industry, CSPs need to move faster, orchestrate ecosystems and fully commit to enterprise 5G in order to capitalise on the opportunity."

Having the right mindset is all very well, but telcos need to turn this new positive thinking into actual enterprise deals if they want to pocket more of the many enterprise 5G dollars coming into circulation.