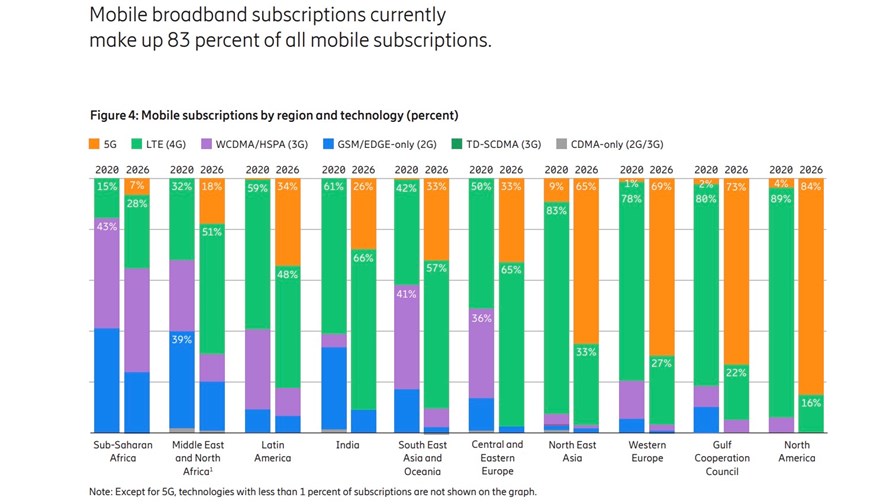 5G subscriptions worldwide are increasing at a rate of around 1 million per day, according to Ericsson's latest mobility report.

As such, it predicts that total subscriptions will reach more than 580 million by the end of the year, rising to 3.5 billion – that's around 40% of all mobile connections – and 60% population coverage by the end of 2026.

Those kinds of figures will make 5G the fastest-adopted mobile technology generation, Ericsson said, which is something we have become accustomed to hearing about each new 'G'. However, that does not detract from the fact it is positive news for mobile operators, many of which have spent massive sums securing spectrum to be able to roll out 5G. We've definitely heard that before too... 5G subscriptions will reach the 1 billion mark two years sooner than 4G did, following its 2009 launch, the vendor said.

China is a big factor in this, having got off the mark with 5G much quicker than it did with 4G, while device availability and affordability is also making a difference.

As you might expect, 5G adoption is highly variable on a region-by-region basis. China, the US, Korea, Japan and the Gulf Cooperation Council (GCC) markets are setting the pace at present, while Europe still lags behind, impacted at least in part by the fact there are still spectrum auctions to come in some markets, with Covid-19 having caused delays in some cases. The UK sold off 700 MHz and 3.6 GHz frequencies as recently as the first quarter of this year, for example, while Spain plans to start the bidding process for 700 MHz within weeks.

North America, already a 5G frontrunner, will have the highest rate of penetration by the end of the forecast period in 2026, according to Ericsson, by which date 84% of its mobile subscribers are expected to be using the technology (see chart above). Western Europe will also have caught up to some extent by then with 60% 5G penetration, but Ericsson has earmarked the GCC region as the one to watch, putting 5G penetration there at 73% in 2026.

Telcos in the GCC were among the first in the world to launch 5G and "are now using 5G network performance as a key to differentiation in a highly competitive market," Ericsson points out. But there's more going on in this market than operators signing up 5G customers quickly: With economies having historically been heavily reliant on petroleum and related industries that are now experiencing price volatility and the prospect of big moves away from fossil fuels, governments in the region are backing various digital initiatives as part of diversification efforts, which is in turn fuelling 5G growth.

"This landmark twentieth edition of the Ericsson Mobility Report shows that we are in the next phase of 5G, with accelerating roll-outs and coverage expansion in pioneer markets such as China, the USA and South Korea," said Fredrik Jejdling, EVP and Head of Networks at Ericsson, in a statement. "Now is the time for advanced use cases to start materializing and deliver on the promise of 5G. Businesses and societies are also preparing for a post-pandemic world, with 5G-powered digitalization playing a critical role."

The earliest iteration of the mobility report I could lay my hands on dates from November 2012, at which time Ericsson predicted that by year-end global mobile subscriptions would reach 6.6 billion, rising to 9.3 billion by the end of 2018. That prediction did not quite play out, with subscriptions coming in at around 8 billion this year; the vendor now expects there to be 8.8 billion worldwide by the end of 2026, 91% of which will be mobile broadband subscriptions, up from just 1.5 billion – or around 23% – in 2012. The starkest difference between the two reports is in smartphone usage. Smartphone subs numbered 1.1 billion in 2012, but rose dramatically to 6 billion at the end of last year and are forecast to hit 7.7 billion – or 88% of all mobile subscriptions – by 2026.

These comparisons are really just for fun, but they serve to illustrate how far this industry has come in less than a decade.