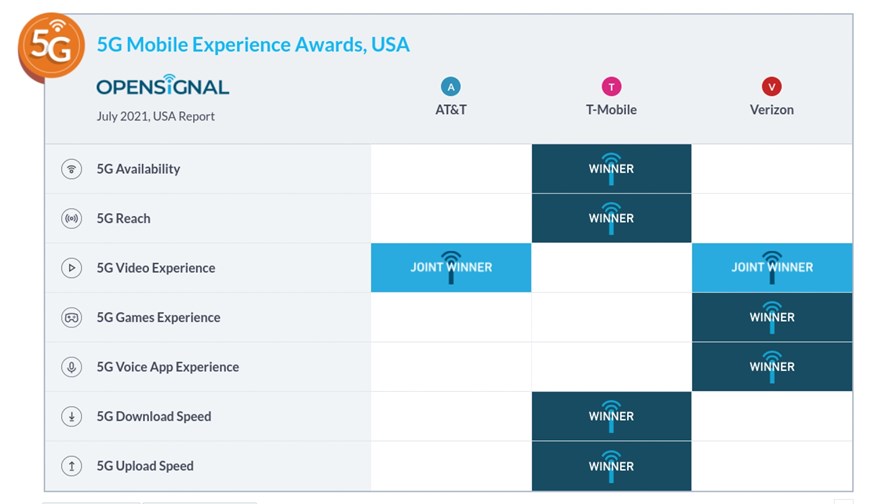 The gloves are off as AT&T and arch-rival Verizon ramp-up massive and expansive competitive promotional campaigns to tempt US consumers to sign-up for 5G service and lock them into expensive new contracts for as long as possible. Last year the realities of Covid-19 superseded the smug, overblown, airy-fairy 5G ads that both operators were pumping out of every media outlet at every possible opportunity but now it’s back to the good old status quo ante as the normal regime of snippy one-upmanship and sniping claim and counter-claim is resumed.

However, it’s not each other that AT&T and Verizon are really worried about. Both are running scared of T-Mobile and it’s determined strategy of keeping prices significantly below those charged by a cosy would-be national duopoly.

What’s more, last month’s “July 2021 5G User Experience Report” from Opensignal, the independent and influential mobile analytics company, revealed that not only does T-Mobile beat AT&T and Verizon on price but also on speed and coverage. Looking at the difference, T-Mobile subscribers now get an average 5G download speed of 87.5 Mbps while AT&T and Verizon customers get 52.3 Mbps, (how’s that for a remarkable coincidence?).

The Opensignal report puts it succinctly, “T-Mobile users’ average 5G download speed has increased by an impressive 16.3 Mbps compared to our April 5G report, and 29.4 Mbps compared to our January 5G report. By comparison, users on AT&T saw their average 5G download speeds reduce by 2.7 Mbps since our last report, while users on Verizon experienced a 4.5 Mbps improvement.”

Meanwhile, Verizon’s main prime-time TV ad shows an engineer up a mobile phone tower, cars driving on an urban street, long-shots of cities and skyscrapers and, of all things, a thunderstorm. Meanwhile the voiceover burbles vaguely on about “next generation service”, “broader spectrum” and  “going the extra mile.”

No actual 5G subscriber benefits or use cases are illustrated - other than video chat over a 5G handset. The expensive promotion fails to mention that video chat is/was a major selling point for 4G LTE technology and functions perfectly well without 5G and 5G’s premium pricing. CEO Hans Vestberg, has gone out on a limb and pledged that 100 million Verizon subscriber’s will get speeds of “up to”  1 Gbps by March 2022. (Please note the usual lame “up to” caveat - or excuse - which covers a multitude of potential consumer disappointments). He needs to get a move on as T-Mobile continues to lead its bigger rivals in a merry dance.

So, as of July this year, in terms of percentage coverage of 5G in the US, T-Mobile was way out ahead with 41.5 per cent, AT&T had 18.11 per cent, Verizon had 11.08 per cent and US Cellular has just 0.83 of a per cent and most of that is in just one state, Iowa. T-Mobile and AT&T have already deployed 5G networks that exceed the Federal Communications Commission’s definition of what constitutes a nationwide 5G network, viz; a network able to demonstrate potential access to 200 million subscribers. Currently Verizon, which joined the 5G “race” late, is a down-the-field also-ran. 5G coverage centres on cities and conurbations with high population densities but 5G is now available, in one (often limited) form or another, in every State of the Union except Alaska, for which at least the bears and beavers are thankful.

T-Mobile leads the pack because the terms of its April 2018 acquisition of Sprint requires it to provide 5G core coverage to 99 per cent of the US population by mid 2024. Currently the telco is on course to meet that commitment. Access to T-Mobile 5G has been boosted by the carrier’s adoption of low-band spectrum which trades off low speeds that, in reality, barely qualify the service as 5G, but are faster than 4G LTE and allows signals to travel further across wide areas and through and within buildings.

For its part, AT&T focused initially on improving its own 4G LTE network and did not enthusiastically embrace 5G until the 4G enhancements programme had been completed. In due course though it did opt to use low-band spectrum and now has a nationwide 5G network that conforms to the FCC’s threshold definition and requirement. AT&T also provides true, full-spectrum 5G in some areas of some major US cities such as Atlanta and Los Angeles.

In terms of value, Grand View Research forecasts that by 2028 the 5G market in the US will be worth US$148 billion driven by ever-increasing demand for higher data rates particularly in what is becoming known as the ‘enhanced Mobile Broadband’ (eMBB) sector where a focus on high-speed, low-latency data networks will be required for a myriad of both residential and commercial applications, such as video conferencing, virtual meetings  and Virtual Reality (VR) & Augmented Reality (AR) gaming which is expected to be a massive money-spinner within the next five years. Elsewhere, over the same period, the manufacturing sector will experience a compound annual growth rate (CAGR) of 50 per cent or more as demand for seamless connectivity to enable IoT and robotics explodes.

5G will also transform the transportation, logistics and the automotive industries not least via Vehicle-to-Vehicle (V2V) and Vehicle-to-Infrastructure (V2I) connectivity as robust, seamless, and uninterrupted connectivity as autonomous vehicles become commonplace. The same applies where the demands of smart homes, smart buildings, and smart cities are concerned.

Globally, Grand View Research forecasts the 5G services market size will be worth $664.75 billion by 2028 and between now and then will demonstrate a CAGR of 46.2 per cent.