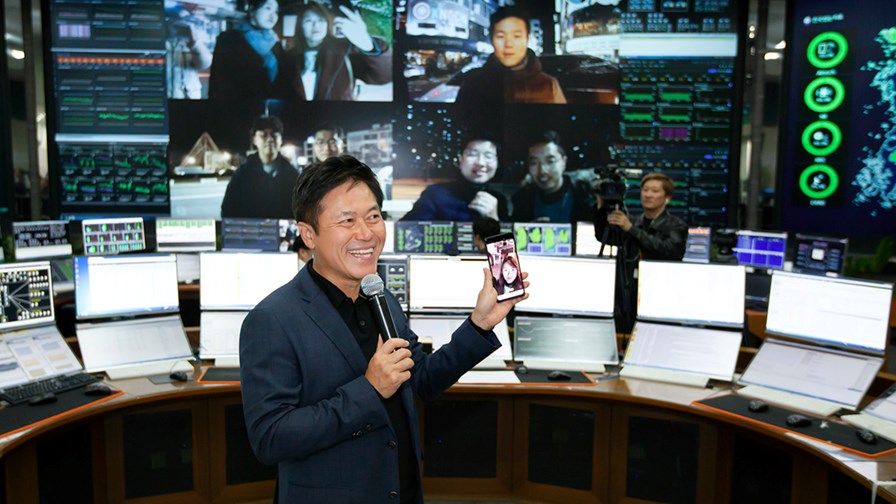 SK Telecom announced on Saturday that it has switched on its commercial 5G network, marking the occasion with a call from CEO Park Jung-ho in Bundang to Myeondong, using a Samsung 5G smartphone prototype. SK Telecom’s 5G network currently covers main areas of 13 cities and counties nationwide. Mischievously, we would like to think the call went something like “Hello, can anyone hear me? There’s no-one there…” That’s the problem with launching a brand new network technology – penetration levels are somewhat low.

However, kudos to SK Telecom for racing ahead with the development of 5G for its domestic market strategy, it’s one heck of an accomplishment. Actually, that first call over its commercial 5G network was made between CEO Park located in Bundang, Gyeonggi-do and SK Telecom Manager Park Sook-hee located in Myeongdong, Seoul. And for the record, the CSP had previously completed 5G calls (just prior to the official launch ceremony) from Bundang to Busan, Daejeon and Gwangju. In all cases, Samsung’s 5G smartphone prototype was used for the calls.

“5G opens doors to infinite possibilities beyond our imaginations,” said Park Jung-ho. “As the ICT leader that has spearheaded the advancement of mobile communications from CDMA to LTE, SK Telecom will once again create a new future with the best 5G network.”

It wasn’t the only “5G first” from the CSP, as it also announced that its first 5G enterprise customer has begun operating its ‘5G-AI Machine Vision’ solution. Myunghwa Industry  is an auto parts company based in the city of Gyeonggi-do and is using the solution to verify product quality. High-resolution, multi-angle photographs of auto parts on the conveyor belts taken by cameras are transmitted to the cloud server over 5G and the AI application in the server instantly scans the photos to check for defects.

Following the launch of its 5G Global Innovation Center in 2015, SK Telecom plans to open a 5G Device Test La’ later this month at its Bundang facility to support SME device manufacturers, as it looks to boost the 5G-AI ecosystem.

“While making efforts to provide the most stable and secure 5G network, SK Telecom will also focus on expanding the 5G-AI convergence ecosystem and generating social values,” added Park.

Whilst it appears that we can’t get enough of these “5G Firsts”, and it all helps to rally the industry and build up the excitement around 5G, none of it really matters yet. What matters is commercial acceptance and business success. We are all going to have to wait quite a lot longer before we know the answer.