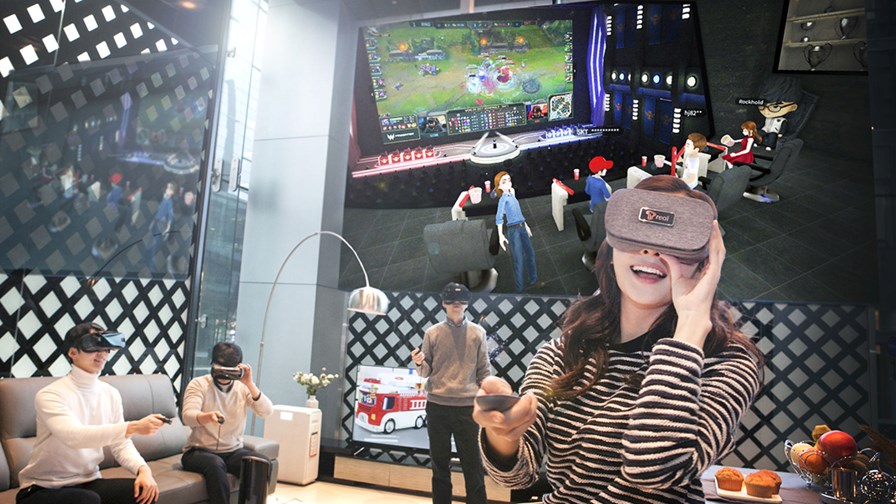 All thoughts of Second Life should probably be parked to one side at this stage. Yes, we do appear to be talking about a virtual world complete with crazy avatars, but the addition of 8K video via 5G takes it more into the Three Body Problem realm of Liu Cixin.

Oksusu Social VR will offer an 80-inch full HD equivalent content view in the virtual world, although it is planned that this will be upgraded to 8K (7,680 x 4,320 pixels) when 5G becomes available. The idea is that users can invite others into the virtual environment to share and jointly watch the content. SK Telecom has adapted its  ‘T real Avatar Framework’ in the platform to have avatars reflect the body movement, facial and emotional expressions in the virtual space.

Paint me sceptical, but I’m having a hard time with this. Then again, I’m not exactly the core target audience. SK Telecom says the VR platform “is expected to create an incredible synergy with 5G and become a massive hit in the new ICT world”. Could shared VR be a use case of 5G eMMB and its low latency? Sure. Is this a case of technology trying to create market need? Unfortunately it may well be.

SK Telecom notes that most of the VR content provided currently is pre-produced content viewed on demand. Real-time online VR content platform is not yet available because the limited data rates of today’s networks are unable to support full VR environments. Once 5G is applied to the VR platform, users should be able to enjoy high-resolution live streaming VR content in real-time.

SK Telecom says it will be investing heavily in VR innovations to maximize the VR experience with 5G. It strongly believes that there will be “explosive needs on the interactive content which offer an exceptional and innovative experiences of daily lives in the virtual world”.

SK Telecom is planning on commercializing ‘oksusu Social VR’ in later of the year, and will expand the platform usage in commerce, advertisements, entertainment and other industries. The service can be accessed with VR devices including Samsung Electronics Gear VR and Google Daydream. In the meantime, fellow sceptics can experience the service at Mobile World Congress next week and prepare to see what the future has in store. Incidentally, the photo (which has hints of a montage about it) shows users of Oksusu Social VR watching a game of "League of Legends" in virtual space.