SFR began construction of its LTE network in 2012. With the increasing popularity of mobile video and real-time gaming services, its mobile data traffic has seen an average annual growth rate of as much as 100% over the past two years. In response to the skyrocketing traffic demand, SFR launched a new unlimited data package in April 2017. SFR plans to strengthen investment in the 4.5G network. SFR is expected to extend its 4.5G network coverage to 90% of its customers by the end of 2017, and further lift this figure to 99% by 2018. 4.5G technologies such as carrier aggregation, MIMO, and 256QAM effectively increase network capacity. MIMO, in particular, improves capacity, coverage, and ultimately user experience without extra spectrums or base stations. Tests using a commercial phone on the 4.5G live network verified that the combination of 4x4 MIMO, 2 CC carrier aggregation, and 256QAM can achieve a top throughput of 628.31 Mbps. At such rates it is possible to play high-definition mobile video without interruption, fully satisfying customer demand for a smooth video watching experience and giving SFR a leading edge in the area of commercial 4.5G networks. 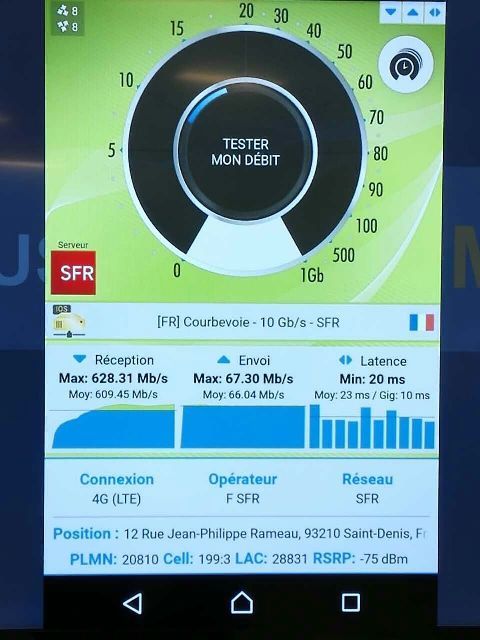 "SFR's goal is to build the best and fastest 4.5G network in France. This will both improve our customers' lives with the best available telecommunications service, and also pave the way for the future, since a successful transition to 5G will depend first on 4.5G successes. Today, SFR's 4.5G network has achieved an average downlink throughput of 300 Mbps in over 221 cities. A 10-GB video can be downloaded within 4 minutes and 30 seconds. We will further increase the average downlink throughput to 500 Mbps by 2018. Moreover, SFR will actively promote the most sophisticated 4x4 MIMO smartphones to offer users the best LTE experience."

"We are excited to jointly deploy an unparalleled network with SFR Group to best serve our users in France. The large-scale deployment of 4x4 MIMO is essential to the continuous evolution of the 4.5G network. Huawei will innovate persistently to provide cutting-edge solutions for the communications industry in France."

4.5G Evolution helps global operators enhance their businesses by introducing 5G technologies into existing 4G networks. Operators can trial 5G-like services quickly and develop the new business models that 5G will support. 4.5G Evolution will improve the operators’ businesses today while keeping them on the road to a successful transition to 5G tomorrow. 4.5G Evolution, the Road to 5G!