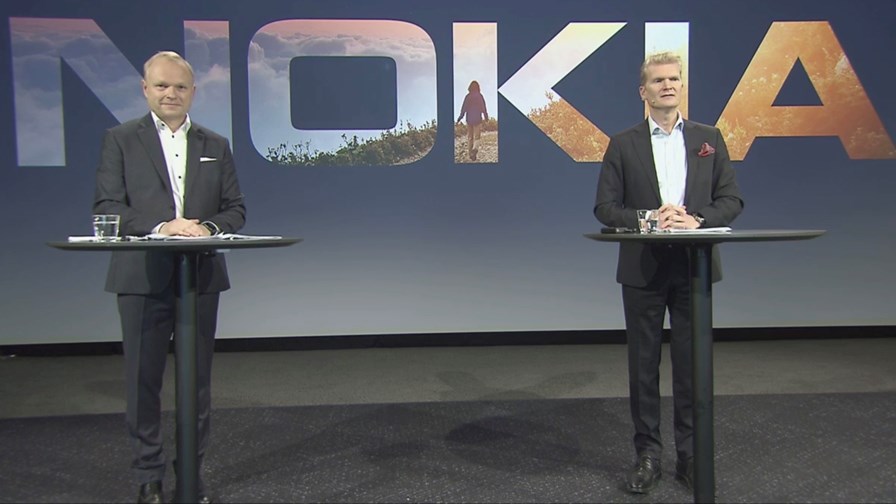 Nokia CEO Pekka Lundmark hosted a strategy presentation on Wednesday that provided a bit more depth on the company’s overall approach to the communications networking market and set a three-year timeline for a new Nokia to emerge, but which lacked the specific detail that might have calmed the nerves of staff, customers and partners.

Nokia’s investors didn’t seem enthused about the latest update, as Nokia’s stock dipped by almost 2% to €3.27 on the Helsinki exchange by the close of trading. Certainly they won’t have been thrilled to hear that the company’s key new business unit, Mobile Networks, will only break even in 2021 because of the greater need for further R&D investment. (See Nokia throws more R&D weight behind mobile networks unit.)

The overall strategy is being pinned to six strategic beliefs, which are summarized below: 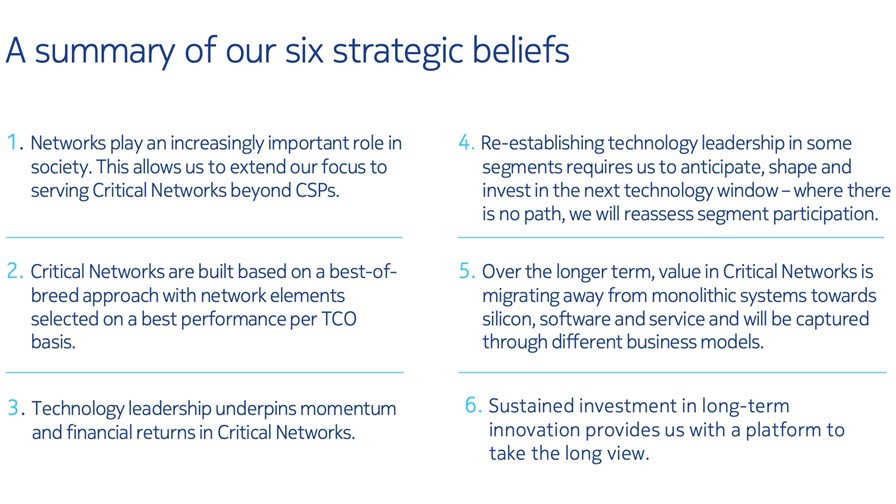 What we do know is that Lundmark is setting Nokia up to play a key role in a world where most networks are built using best-of-breed elements, rather than being based on single-vendor pre-integrated proprietary systems that dominate many parts of comms networks currently (and which will continue to do so for the next few years at least).

That suggests he not only wants Nokia’s products to be the very best, so they will get selected, but also that he wants Nokia to be the company that can pull together multi-vendor architectures and play a lead supplier/integrator role.

As a result, Lundmark wants Nokia’s products to be the technical leaders and be among the market share leaders, as that’s the only way they can be of true value in a highly competitive market.

“If we want to deliver economic value… in those segments where we can clearly show that we have a technology leadership that can be in a way hardwired and anchored in technical facts… we immediately have a strong competitiveness,” stated the CEO. “But if we do not have that technology leadership, then you don't have pricing power, you are bound to have a lower market share, so technology leadership is paramount. It varies between segments how many companies will have space in the market to deliver economic value. Usually it's two, sometimes three, in exceptional cases maybe four, but leadership in practice will mean number one or number two position, sometimes number three position. That's absolutely necessary. In cases where we will not be able to establish or show a path to economic value creation, we will reassess our segment participation, so we will not automatically be in all different segments in cases where we cannot show economic value creation.”

So, some units might be sold or closed within the next three years but there's no certainty: Every product line, every team, has a figting chance.

And, in a way, the CEO is offering the four main business units that will begin semi-autonomous operations at Nokia from 1 January 2021 a clean slate, the chance to be in charge of their own destiny, and to prove themselves worthy of a place in the Nokia portfolio. And it seems they have three years to prove themselves, which in the current, increasingly software-oriented market of lightning-fast market dynamics and changes, is quite a long time.

That in itself could be a problem, as customers in particular will not know whether Nokia is committed long-term to some sectors and as a result may choose to put their business elsewhere: This will be a dilemma for Nokia and its existing/potential customers.

For the Mobile Networks business division this means ensuring that the mistakes of the past few years are rectified and that Nokia can build on its early position as a champion of Open RAN to play a key role in that market: Lundmark said Open RAN business would not “move the needle” for a few years but that the company would have a full set of (O-RAN Alliance) interfaces in its products in 2021.

But while much was made of greater investments in Mobile Networks, Lundmark and his CFO, Marco Wirén, who co-hosted the presentation, didn’t say how much would be invested or what 2021 sales might look like in terms of revenues, only that the company still expects to hit an overall group operating margin of 7-10%, even though Mobile Networks will only break even. That suggests not only that Nokia’s other three business units will have to be bold and brave with their pricing but that significant cost savings, and potentially job losses, might be on the horizon.