If you thought patents got ugly with LTE, just wait until 5G 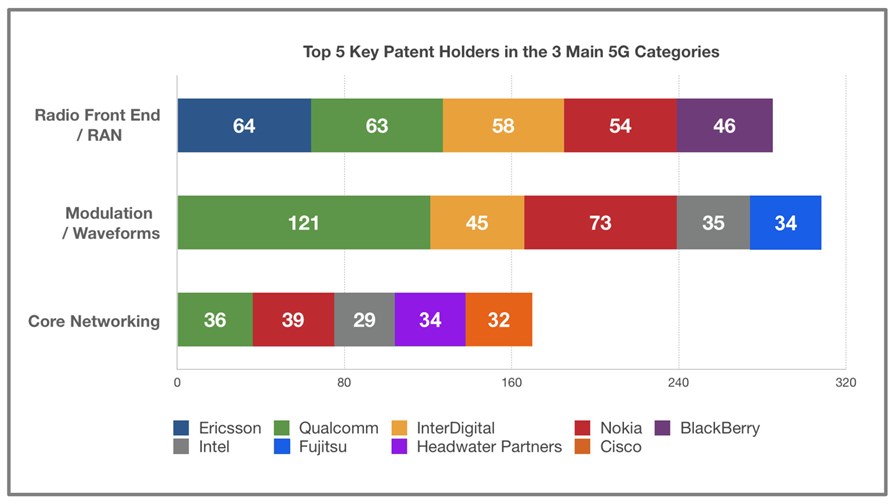 The number of legal patent disputes around 3G and LTE, many of which are still ongoing, shows the immense value of patents and IPRs in the competitive telecoms sector. No matter how much we may all like this unpleasantness to go away, you can be sure it won’t, and that the arrival of 5G with its associated new technologies and processes will only compound the issue. If you want to be competitive in 5G, then you had best make sure you have a stockpile of IPRs and patents at your disposal.

For example, a recent academic paper by Intel’s associate general counsel Ann Armstrong concludes that for a $400 Android or Windows smartphone, the royalty payments alone total in excess of $120, which is almost equal to the cost of device’s components. The largest two items are the cellular baseband and the WiFi chip, each costing about $50 in royalty payments. This is serious money (and justification, if it was ever needed, of Intel’s early commitment to 5G R&D).

Technology-focused law firm LexInnova has published analysis on the likely patent landscape for 5G and finds that while early analysis shows that Qualcomm will still be the IP leader, it may be not as dominant as in LTE. Last year, Qualcomm reportedly made $8bn in revenue from IP royalty payments. Microsoft is estimated to have made more than $2bn in just Android licensing revenue in 2015, and the mobile licensing revenues of Ericsson and Nokia both approached $1bn in the year.

LexInnova says it undertook its study “to provide early knowledge to in-house IP counsels, enabling them to devise strategies for IP management for 5G. This will allow companies involved in application and services for mobile commerce to develop intellectual property and partner with companies in order to minimise licensing cost and maximise licensing revenue.”

As the LexInnova report states: “Being just a mobile component or technology service vendor offers limited revenue and profitability. IP licensing is much more profitable as it doesn’t require excess manufacturing and operations costs needed for component design and mobile services.”

LexInnova says 5G mobile technologies royalty revenues are expected to be more distributed among companies than LTE due to hybrid nature of technologies involved. There will also likely be more NPEs (non-practicing entities, such as InterDigital) in amongst the leading assignees, which would also mean a greater level of licensing and litigation activity. Meanwhile, handset manufacturers such as Apple and Samsung are also working on 5G IP development (especially on baseband processors) in order to minimise IP licensing costs, and Intel is expected to make far greater inroads in 5G than it managed with LTE. We should also see more cross-licensing agreements with 5G.

With regards the RAN and wireless front end, technologies ripe for an IP grab are centimetre wave (10GHz-30GHz) and millimetre wave (30GHz-300GHz) radio, beam steering or beamforming techniques, and massive MIMO. As the graph above shows, Nokia, Ericsson and Qualcomm all rank in the top five, with Interdigital expected to generate further licensing activity.

Modulation schemes are used with baseband processors of a mobile system. 5G will require non-orthogonal transmission schemes, rather than the OFDM of LTE-Advanced. Some schemes under consideration include Filter-Bank Multi-Carrier (FBMC) transmission, Universal Filtered Multi-Carrier (UFMC) transmission and Generalised Frequency-Division Multiplexing (GFDM). Qualcomm is by far the leading patent holder in this area, but faces stronger competition in 5G.

Finally, with regards core networking technologies, Network function virtualisation (NFV) and software defined networks (SDN) sit at the heart of 5G architectures, together with smart networking technologies such as higher Inter-Node Coordination and backhaul, as well as Access Link Integration to improve network data throughout and efficiency. The network control will require Self Organising Network (SON) technology, Context Aware Networking and Information Centric Networking. There will be increased cellular and WiFi network interworking and short-range device-to-device communication. Nokia, Qualcomm, Cisco, Intel and Ericsson are in top six of LexInnova’s list, along with NPE Headwater Partners.

The number of patents and key underlying technologies for 5G mobile networks will evolve significantly within next five years, and so much will depend on what technologies are chosen to form the 3GPP-led network standard for 5G and the ITU’s IMT-2020 radio access technology. The race is on, and the prize is substantial.