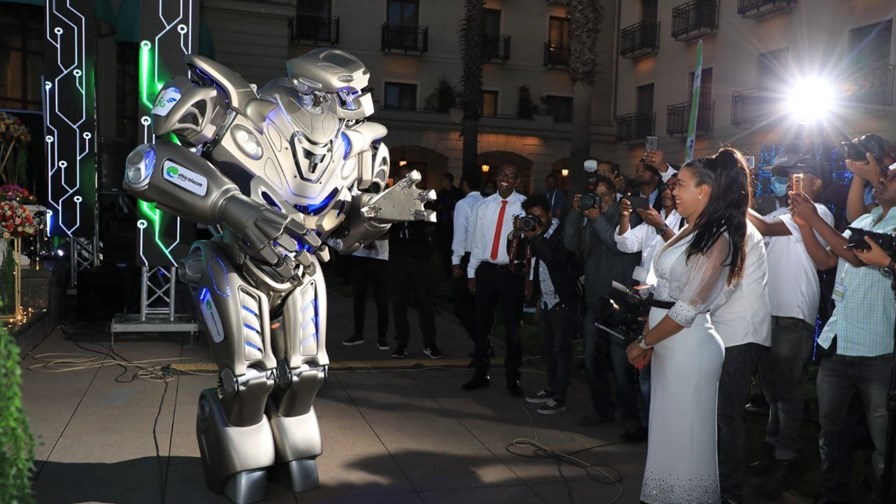 A robot interacting with Ethio Telecom CEO Frehiwot Tamiru at the operator's launch of a pre-commercial 5G network in Ethiopian capital Addis Ababa.

State-owned operator Ethio Telecom has launched a pre-commercial 5G network in Ethiopia’s capital city Addis Ababa as it aims to secure its dominance in a market that recently moved to boost competition by opening its doors to privately-owned competitive operators.

According to Ethio Telecom it is enabling 5G services at six base stations in the capital city after obtaining temporary approval from local authorities to use 5G spectrum. Huawei was tapped as a strategic technology partner for the network deployment.

Ethio Telecom suggested that while the trial 5G service is currently only available in a small area in the capital, it plans to widen its footprint and cover up to 150 sites in regional cities in the coming year. Further expansion to more areas will depend on “feasible business demands” and the availability of affordable 5G devices, it explained in a statement announcing the move.

The operator didn’t miss the opportunity to tout some of the most notable features of the fifth-generation technology, including “blazing” speeds of up to 10 Gbit/s, low latency below 1 millisecond and “massive” communications capability of up to 1 million connections within a square kilometre for IoT applications. Its benefits are tipped to have a big impact on mission-critical services requiring real-time reaction, healthcare, manufacturing, agriculture among others, according to the company.

“This 5G service will provide our customers with best-in-class solutions, improve their experience and allow our enterprise customers to boost productivity, enhance operational efficiency and introduce new solutions to their customers,” the state-run operator noted.

To make a point about 5G’s potential, the operator used its launch event to demonstrate a 5G-powered robot that interacted with visitors, China Internet Information Center reported.

The telco claimed it currently covers 97% of the country with its 3G and 4G networks. Its move to launch a 5G trial service is aligned with its growth strategy and an “aspiration to become a preferred operator” in a market it still dominates.

Ethiopia had been reluctant to open its doors for private mobile network players for years, but in 2021 the government granted a licence to the country’s first competitive operator: Safaricom Telecommunications Ethiopia, a local telecoms operating company owned by the Global Partnership for Ethiopia (GPE) consortium. The latter includes participation from Vodafone Group, Vodacom, Safaricom, Sumitomo Corporation, CDC Group and the US state’s International Development Finance Corporation. (See Vodafone consortium lands license in Ethiopia, but MTN misses out.)

According to data cited by Connecting Africa, in January 2021 there were almost 45 million mobile connections in Ethiopia, which has a population of more than 116 million, giving it a mobile penetration rate of just 38.5%. Internet penetration was even lower, standing at 20.6% or nearly 24 million connections.

In a separate development, in March this year the Ethiopian government postponed indefinitely a plan to sell a 40% stake in the national operator, citing recent global and local developments, and “fast-moving macroeconomic changes”. The stake sale process began in June last year. (See Ethiopia kick-starts process to sell stake in national operator.)