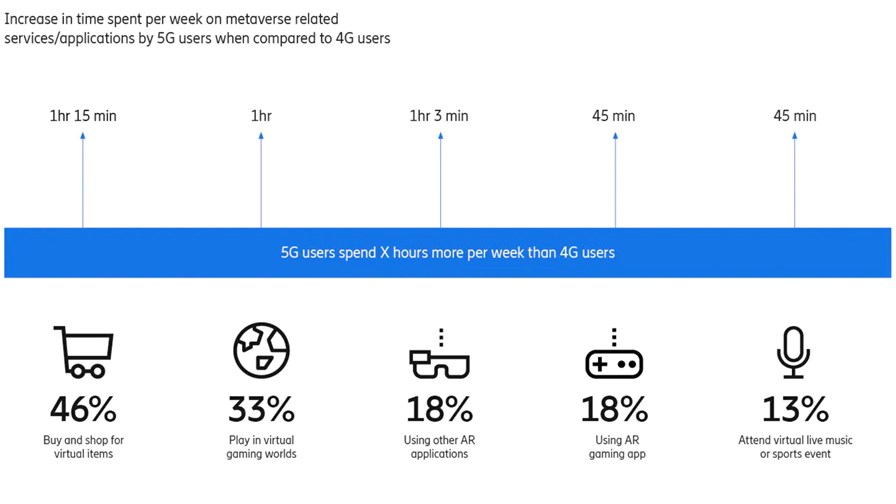 Ericsson has just published its biggest global consumer research report to date which, it claims, shows that 5G is already proving to be the most direct pathway to the metaverse. The publication, from its ConsumerLab division, is called 5G: The Next Wave, and the Swedish vendor postulates from its findings that, thanks to the burgeoning popularity of 5G across the globe, the technology “bridges the milestone from early adopters to mass adoption”.

Presumably following the example Liz Truss, the UK’s third prime minister in three years who constantly talks about “growing pies”, Ericsson’s English is mangled (although I stand to be corrected if anyone can post a shot of a lilliputian bridge over a milestone) but it does emphasise that the report “underlines consumers’ growing commitment to 5G and their expectations on next-generation uses cases”.

The research, which is based on a mass of data collected by Ericsson on 5G launches since 2019, also points to the impact 5G has had on early adopters around the world, as well as giving some indication of the enthusiasm and expectations that 4G users now have for 5G. The report forecasts that at least 30% of smartphone users intend to take up a 5G subscription within the next 12 months.

Some 49,000 consumers in 37 countries were interviewed, the biggest global 5G-related consumer survey in the industry and the largest consumer survey conducted by Ericsson on any topic. In scope that translates to a representation of the views of about 1.7 billion consumers worldwide, including 430 million 5G subscribers.

The head of Ericsson Consumer Lab, Jasmeet Singh Sethi, commented: ”The scale of the research gives us an authentic insight into consumers’ views and attitudes to 5G. The report shows that the next wave of potential 5G users have different expectations from the technology compared to early adopters. Overall, consumers see engaging with 5G as an essential part of their future lifestyles.”

He added: “It is interesting to note that 5G is emerging as an important enabler for early adopters to embrace metaverse-related services, such as socialising, playing and buying digital items in interactive 3D virtual gaming platforms. The amount of time spent on augmented reality apps by 5G users has also doubled over the past two years.”

It seems that in comparison to 4G users, 5G subscribers spend an average of one hour per week more on metaverse-related services, such as gaming in virtual worlds, and augmented reality (AR). Furthermore, 5G consumers who have direct experience of using extended reality (XR) apps indicate they will adopt new devices as soon as they can. Indeed, 50% of 5G subscribers who already use XR-related services are of the belief that AR apps will move from smartphones to XR headsets within the next two years.

Also covered in the report are the behavioural changes initiated by CSPs as they bundle additional digital services, such as enhanced video and AR apps, into 5G plans. It also looks at the speed of 5G uptake and whether consumer expectations of the technology are being met, together with the ways in which 5G is changing the behaviour of smartphone users and the profound effects they are having on network traffic.

Ericsson’s six key trends for the next wave of 5G

The report distils its findings into six key trends. They are that:

1) 5G takeup will be inflation resistant, and that at least 510 million consumers across 37 markets will opt to subscribe to 5G next year. Well, maybe. The report was compiled before the current tsunami of inflation and price increases hit – stretched households are now tightening their belts as interest rates rise.

2) The next wave of 5G enthusiasts will be “demanding”, with much higher expectations of 5G performance in general – and network coverage in particular – than easier-going early adopters.

3) Interestingly, the report shows that consumers now regard overall geographical coverage, the availability and robustness of both outdoor and indoor coverage and hot-spot coverage, as much more important than broad-brush figures about population coverage.

4) There is strong evidence that the availability of 5G is resulting in the rapid adoption and increased use of enhanced video and AR. Over the past two years, 5G user time spent on such services has doubled to two hours per week.

5) Hitherto, elusive 5G monetisation models are at last beginning to emerge and evolve, with 60% of 5G subscribers expecting their service offerings to move beyond just more data volumes and speeds and to on-demand tailored network capabilities for specific needs.

6) 5G adoption is setting the path to the metaverse. 5G users on average are already spending one hour more per week in metaverse-related services than 4G users. The report forecasts that two hours more of video content will be consumed weekly on mobile devices and that, by 2025, 1.5 hours of such consumption will be via AR/VR glasses.

Of course, these are forecasts based on trends so far and the expectation of a company that desperately needs 5G to be a great success. But things might change. The world is in a hell of a mess at the moment, and worry and uncertainty are increasing everywhere on the planet. Family and personal budgets are tight and reductions in recreational spending are increasingly the order of the day. When it’s a choice between staying warm and putting food on the table versus spending constrained money on pricey premium comms services, the answers are obvious. Ericsson’s report describes a 5G primrose path to the metaverse, but the reality could be a long and rocky road.