At this stage 5G hardly exists, but it’s getting there 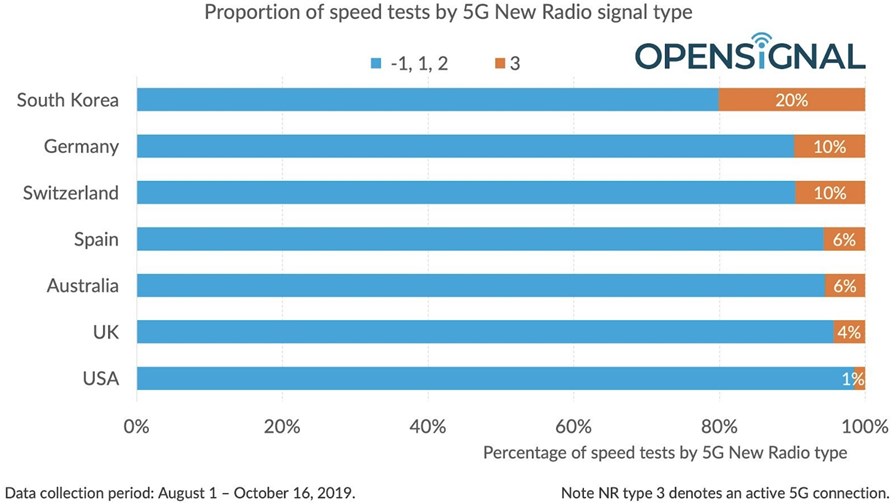 Smartphone testing outfit, Opensignal, has returned some interesting stats on the global 5G experience now that the first services are up and running, albeit still in first gear and sometimes with the handbrake on. As expected, Opensignal says the experience of 5G users is still  “extremely uneven.”

In countries such as Switzerland, Germany and South Korea where there’s been a self-certified rapid roll-out of non-standalone 5G, the amount of time a 5G user, clutching his or her shiny new 5G smartphone, actually spends at 5G speeds is tiny as a proportion of the total time spent online, as the above graphic from Opensignal demonstrates.

Even South Korea, the first past the post in the race to a meaningful 5G build, has a 5G user base with an expectation of spending just 20 per cent of its time on 5G before the network throws the phone back to LTE. The following pack rarely get above 5 per cent while the US, which has higher mmWave speeds and performance, is stymied at this point by much lower and slower rollout.

The US went for mmWave rollout first. Europe and much of the rest of the world went for 5G at 3.x GHz which is usually deployed on 4G infrastructure and is happy operating from the existing tower grids. The high frequencies deployed in the US mean that proper coverage in mmWave can only be achieved by reducing the spacing between base stations - that takes time and money.

Meanwhile in South Korea and Europe all operators have launched, or expect to launch, “mid-band” services which are deemed to offer the best balance of both reach and speed. South Korea now claims about  3 million 5G customers from a population of around 51 million people.

Who or what is to blame?

The above numbers don’t indicate any sort of all-round failure by the world’s telcos, but they do reinforce what we should already know - that cellular generational change is now designed to be so gradual as to be almost imperceptible.

5G - any ‘G’ - just glides in. It doesn’t arrive with a rush so that one day you’re stuttering along on rusty ‘old’ 4G and the next day a switch is flicked and online life is transformed. The network assigns the 5G user a 5G connection when it’s available and falls back to 4G when it’s not. As the time spent on 5G increases as the 5G network gets built out, the demands made on 4G reduce, increasing the expected speeds and performance on the established  technology at the same time.

Another reason for the glide characteristic, is that both 5G when you can get it and 4G when you can’t, are continually improving in terms of speed and latency. 4G is an old dog with a lot more life left in it.

So. why the surprise at the low 5G occurrence at this stage?

The industry always portrays a ‘G’ shift as a much more cliff-edgy sort of transformation than it actually is for reasons of marketing and general excitement-fostering. After all, a race to 5G with the slogan, “So good you won’t even notice the difference,” would clearly have been a marketing non-starter, but this is exactly what you get and the numbers reported by Opensignal illustrate that fact.

In the US that 1 per cent number means that, unless you’re an early adopter prepared to charge about a city where 5G is supposed to be active and where you might see the occasional appearance of the 5G sign on your smartphone, then the chance of enjoying  a fleeting high speed thrill are very low indeed. About 1 per cent in fact.

But with the impending release of mid-band spectrum and more time for build-out, the situation in the US will improve and real speeds on average will build too, even though 5G users might not really notice it.