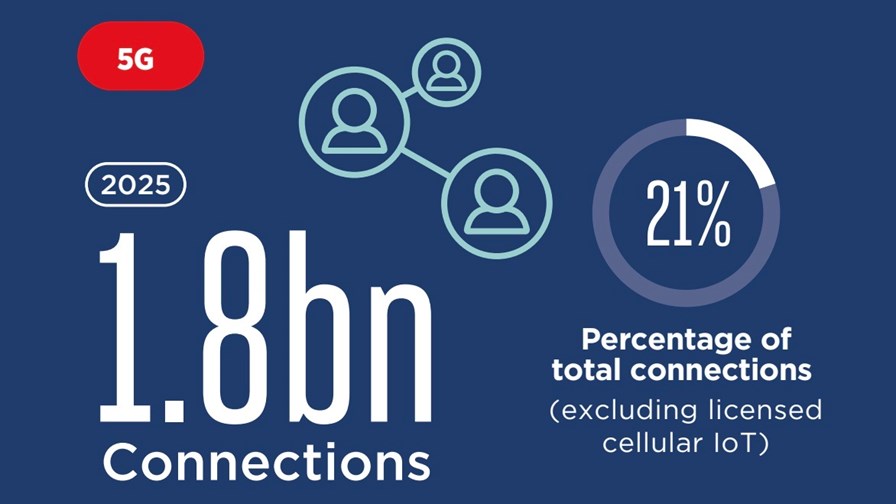 To coincide with the return of the Mobile World Congress event, the show's organizer, the GSMA, has issued a new report that predicts 5G will account for 21% of global mobile connections by 2025.

According to the industry group's research arm, GSMA Intelligence, 5G connections will reach 500 million by the end of this year. That number is on course to cross the 1 billion threshold by 2023, and by 2025 will have reached 1.8 billion, just more than one fifth of the expected total of 8.8 billion SIM connections (excluding licensed cellular IoT). By then, the world is expected to have passed peak 4G, with connections topping out at 5.1 billion in 2024.

"The launch of commercial 5G services in Latin America and Sub-Saharan Africa over the last year means that the technology is now available in every region of the world. The pandemic has had little impact on 5G momentum; in some instances it has even resulted in operators speeding up their network rollouts, with governments and operators looking to boost capacity at a time of increased demand," the GSMA noted in its report.

In terms of uptake, developed Asia Pacific and North American are expected to lead the way, with 5G penetration reaching 53% and 51% respectively by 2025. They are followed by Greater China and Europe, with 48% and 35% respectively.

One predicted consequence of this healthy growth is that mobile's contribution to global GDP will continue to increase. In 2020, the GSMA said mobile technologies and services accounted for 5.1% of GDP, equivalent to $4.4 trillion. It also employed – directly and indirectly – 25 million people around the world, and contributed $410 billion in taxes.

"By 2025, mobile's contribution will grow by $480 billion (approaching $5 trillion) as countries around the world increasingly benefit from the improvements in productivity and efficiency brought about by the increased take-up of mobile services," said the GSMA.

This all looks very promising, but there is always room for improvement. For example, the mobile penetration rate is lower and network coverage gaps remain concentrated – predictably enough – in the poorer parts of the world. In Sub-Saharan Africa for instance, only 28% of the population uses mobile services. The majority, 48%, live within the footprint of at least one mobile network, but do not use it: 24% of people don't have any kind of access to mobile services. Only 28% have coverage and avail themselves of it. In addition to lack of network coverage, the GSMA cites lack of digital skills and literacy, and the affordability or otherwise of handsets as persistent barriers to adoption.

Meanwhile, as is customary with the GSMA, the report does not shy away from lobbying on behalf of its operator members for governments to go easy with the regulations.

"Recognising the significance of connectivity, governments frequently set policy targets that put additional pressure on operators to extend and upgrade their networks. At the same time, artificially high levels of competition in many countries limit operators' share of revenues, and spectrum fees and other tax and regulatory cost burdens remain high. This scenario does not support accelerated network investment," the report said.

"Governments and regulators have a choice: implement short-term policies that hold back connectivity and limit the widespread benefits it generates, or drive economic growth and social welfare through pro-investment policies and regulatory restraint," said the GSMA.

Well, it just wouldn't be Mobile World Congress without the GSMA's regulatory wish-list, would it?