5G in Japan: as fast as a speeding bullet train 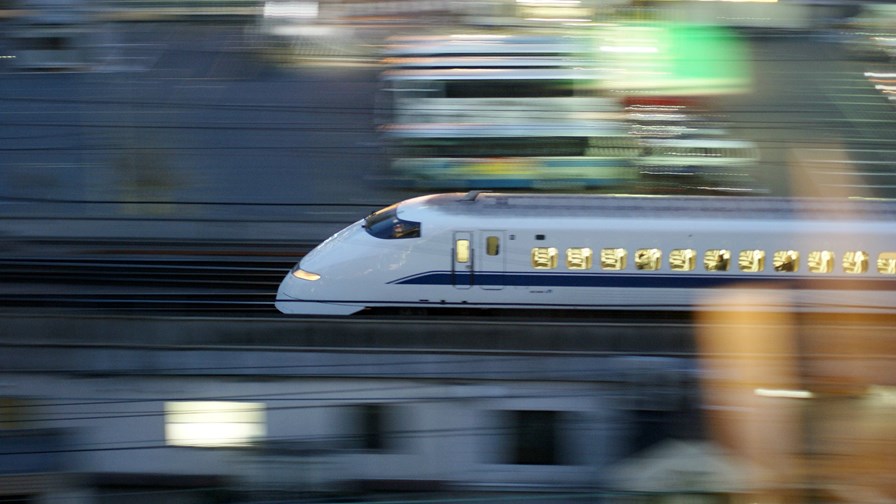 NTT Docomo of Japan has succeeded in achieving stable 5G mobile communications between base stations and a Shinkansen bullet train hammering along a commercial railway track at 283 kilometres per hour - a world's first. The trial, conducted in partnership with the Central Japan Railway Company, took place on the Tokaido Shinkansen route which is Japan's premier and busiest bullet train line connecting Tokyo, Nagoya and Osaka.

The route chosen for the verification trial covered part of Japan's most venerable Shinkansen route. It was opened on October1, 1964, that's 55 years ago today. Since then it has carried in excess of 5.6 billion passengers and, if you'll forgive the pun, has been a major engine of growth in the development of the country's economy.

Japan has always had a thing about speed and the bullet trains are a beloved physical manifestation of national desire and pride. Over the years as a journalist I have been lucky enough to experience travel on Shinkansen trains across the length and breadth of Japan on many occasions and it has always been a great pleasure to hurtle across the country in a rock-steady high-tech train cocooned in almost complete silence as the countryside flashes past in a blur of colours. The comfortable silence of the trip being broken only by the quiet whoosh of doors as the conductor enters, bows to the carriage, checks the tickets and bows his way out at the other end of the car.

The 5G tests were conducted between Mishima and Shin-Fuji stations in Shizuoka Prefecture between August 24 and September 7 and achieved successful 5G wireless data transmission speeds in excess of 1.0 Gbps and perfect consecutive handover between 5G base stations temporarily sited alongside the track. 5G mobile terminal equipment was also placed in a brand-new model of Shinkansen, the N 700S, which will begin commercial service on Japan Railways early in 2020.

Both ultra-high-speed data and and ultra-high-definition 8K video were transmitted via advanced beam-forming and beam-tracking technologies incorporated in the 5G mobile and base stations. In addition 4K high-definition video of the rapidly passing scenery was relayed live from the train's mobile terminal to the base stations. That section of the bullet train line is particularly impressive as it passes Mount Fuji, which is always beautiful whatever the weather.

There has long been debate about whether or not millimetere wave-based 5G networks will be up to the job of delivering continuous, stable service to fast-moving vehicles.The Shinkansen trial has affirmed that it is and so the stage is now set for yet another quantum leap in the transmission and reception of ultra-high-speed data on the move. The tests have shown that it can be done and now scientists will focus on maximising the distance between 5G base stations and further refining the handoff techniques for millimetre wave equipment.

NTT Docomo has 78 million subscribers and, last month, introduced commercial 5G services in Tokyo and many other Japanese cities. The telco has announced plans to provide 5G services to all of the country's 47 prefectures by the end of June next year.

And whilst we are on the subject of speed in Japan, does anyone remember the uniformed ticket punchers who, back in the 1990s, were stationed (see what I did there?) at major railway interchanges such as Shinjuku, Ueno and Ginza in Tokyo, and no doubt many stations elsewhere? Shinjuku is the busiest railway interchange on the planet with 45 kilometres of interconnected tunnels with 230 exits. Shinjuku is traversed by 3.5 million people per day as they make their way to and from the station's 53 platforms.

There was already a lot of high tech kit and systems in and on Japanese overground and underground railways even back in those days but the tickets were still punched by hand and huge numbers of passengers were funnelled into small areas where their tickets were validated before they could access a platform. The system could have caused horrendous bottlenecks and crushes but the men doing the ticket punching were incredibly quick and efficient. Things happened so fast that it really was a case of blink and you missed it.

Rush hour in Tokyo lasts for a minimum of three hours twice a day and the operatives who stood there punching away at tens of thousands of proffered tickets got little respite. However, now and again there would be a lull of a few seconds and that's when they came into there own.

So adept were they at manipulating their punches (they must have has wrist muscles like steel cord) that they could play incredibly complex tinkling little tunes on them. Often a virtuoso would perform a solo and then be joined by his colleagues as the tintinnabulation reached its chiming crescendo and then end as the next phalanx of commuters arrived. It was extraordinary and if ever anyone was a candidate for RSI it was those men. They've gone now but they were quite something and very highly regarded.