5G coverage and/or FTTH connectivity now available to more than half of Europe’s residents: Report 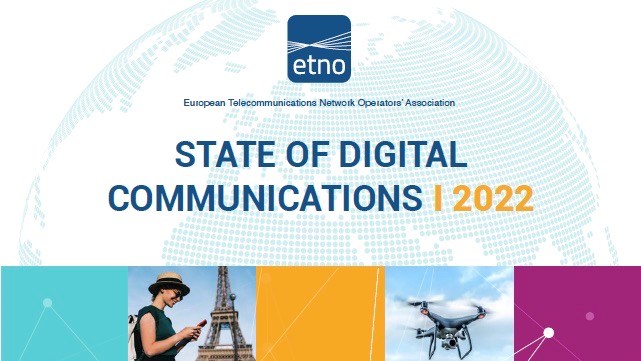 The European Telecommunications Network Operators Association (ETNO) has published its “State of Digital Communications 2022” report showing that more than 50 per cent of Europeans (primarily, but not exclusively, citizens of the European Union) now have access to either a 5G network, an FTTH network and connection, or both. However, Europe continues to trail other nations in other parts of the world when it comes to the speed and breadth of roll-out of 5G and FTTH, investment and the financial robustness of the telecoms sector overall.

ETNO worked with research and consultancy firm Analysys Mason in the preparation of the report which shows, the Covid-19 pandemic notwithstanding, the European telecoms industry invested a record level of capital expenditure, €52.5 billion, in 2020, up from €51.7 billion in 2019.

That has resulted in mass 5G coverage in the region. In 2020, 30 per cent of the European population had access to 5G and by the end of 2021 is was accessible by 62 per cent of Europeans. That said, just because 5G is available, it doesn’t mean consumers are rushing to sign on the dotted line for a contract. Last year a paltry 7.4 per cent of Europeans used 5G and that number is expected to grow only to 18 per cent by the end of this year. 5G is experiencing a smouldering start but is expected burst into flame in 2023.

Meanwhile, it’s good news where fibre-to-the-home is concerned. Last year, for the first time, FTTH services were available to over half of all Europeans and the very latest figures show that has now increased to 51.6 per cent.

That’s the upside. For, as ETNO points out, Europe still lags behind some of its global peers. For example, US trade associations claim that 5G “covers” 93.1 per cent of the American population (although availability is patchy and heavily skewed to metropolitan areas and big cities). Meanwhile 93.9 per cent of the population of South Korea get 5G coverage. The levels of investment behind the disparity in 5G coverage are indicated by the different amounts of capital expenditure per head. It is €96.3 in Europe, €115.4 in South Korea (which is, of course, a much smaller country than the combined area of the EU and other European states) and €191.9 in the US.

ETNO goes on to point out that the “relatively slow pace of investment in strategic 5G and fibre networks [in Europe] is reflected by a weaker financial and market position compared to global peers. European telecoms, by way of regulation and lack a single market, remain highly fragmented, with Europe accounting for 38 operating telecom groups with over 500,000 subscribers, compared to seven in the US, 4 in Japan and three in South Korea.”

The report further shows that in the highly-regulated European markets, telecoms revenues are quantifiably lower than in South Korea and the US: The Average Revenue Per User (ARPU) for mobile subscribers in Europe in 2020 was €14.40, in South Korea it was €25, and in the US it was €37.90. Europeans also use less data: In 2020 average mobile data usage was 8.52 GB in Europe, 10.62 GB in the US and, in South Korea, 12.52 GB.

The above section of the ETNO report ends with the observation that “the overall European telecom sector shows a fall of the EV/EBITDA ratio, a rise of the net debt/EBITDA ratio and a sustained underperformance on stock markets.”

EV is “enterprise value”, which is the sum of a company's equity value or market capitalisation plus its debt minus its cash. EV is usually applied when evaluating a company for buyout or takeover. The EV/EBITDA ratio is calculated by dividing EV by EBITDA to achieve an earnings multiple that is more comprehensive than the price to earnings (P/E) ratio alone. EBITDA (earnings before interest, taxes, depreciation, and amortisation) is calculated before other items such as interest and taxes are considered. It also excludes depreciation and amortisation, which are non-cash expenses. In this way the actual financial performance of an enterprise becomes more evident. The same metric is commonly used to compare a company’s value, including debt and liabilities, to true cash earnings. Lower ratio values indicate that a company is undervalued.

Later, the report focuses more intently on Europe and confirms in that, as is generally known, the global Covid-19 pandemic has been the accelerant of a range of changes that have happened in telecoms since early in 2020 and have driven massive growth in network traffic. One of the most obvious and pervasive of these is streaming video platforms and OTT video calling, the latter has now become a mainstream resource for businesses and enterprises across Europe.

Data from the report also shows that telcos are increasing their investments in network and service innovation. For example, 19 new edge cloud offers were launched in Europe last year compared to 10 in the US and 25 in the Asia-Pacific region. Elsewhere, as cyberattacks and ransomware proliferate, European telcos are increasingly turning their hands to selling comprehensive security solutions as a service. Indeed, in western Europe alone, operators’ revenues from retailing security solutions reached €3 billion last year and are on track to hit €4 billion by 2025. Simultaneously, the IoT sector continues to power ahead with active IoT connections. They stood at 180 billion in 2020 and are expected to reach 353 billion next year.

And last, but by no means least, on the sustainability and green front, efforts to reduce the carbon footprint of the telecoms industry are bearing fruit. In 2020, 75.3 per cent of all energy used by all ETNO members was from renewable sources, up from 60.4 per cent in 2017. Similarly, CO2 emissions of ETNO members in Europe were 2.77 kiloTonnes, down from 4.67 kTonne in 2017.