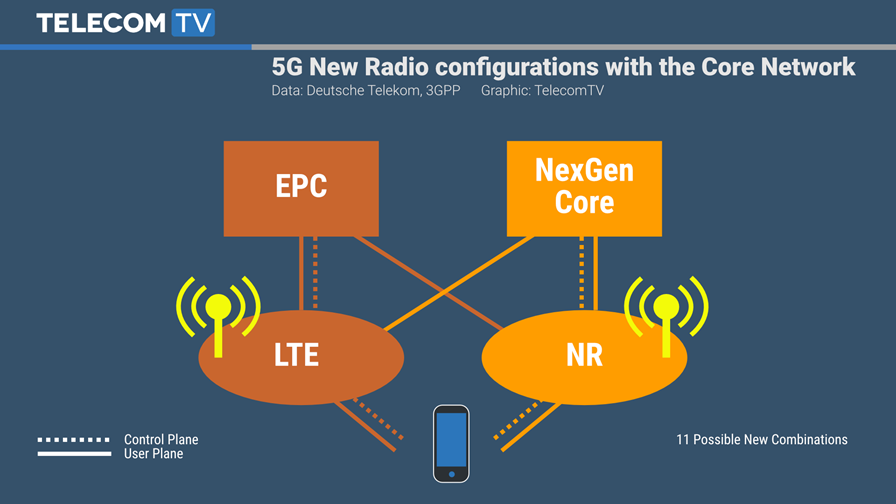 The latest plenary meeting of the 3GPP Technical Specifications Groups (TSG#72) in Busan, Korea, has agreed on a detailed work plan for Release-15, the first release of 5G specifications. The plan includes a set of intermediate tasks and check-points to guide the ongoing studies in the various Working Groups. Key dates to watch out for:

The 3GPP also made progress during the Busan meeting on defining the new radio (NR) access standard, agreeing the target scope for its eventual inclusion in Release 15. It has been decided that the NR must work in both standalone and non-standalone configurations – and by non-standalone they mean using LTE as the control plane anchor. Standalone mode implies full control plane capability for the NR. This is made possible because of the agreement to separate the control plane from the data plane, which is a familiar concept if you have been following TelecomTV’s coverage of NFV and next generation architectures.

There’s a good overview of all the possible permutations here (zipped PPT), courtesy of Deutsche Telekom, which shows how you can arrange two radio technologies (LTE and NR) and two core network concepts (the current EPC and a Next Generation Core Network) along with the radio level aggregation between them. In short, 11 new scenarios are possible. The question, though, is whether or not 3GPP needs to support all these architecture options, and how to ensure forward compatibility in order to avoid global fragmentation. At the moment, it would appear that the 11 might get reduced to 6 or 7, which is still a high number and therefore added complexity.

The 3GPP also agreed two target use cases: Enhanced Mobile Broadband (eMBB), as well as Low Latency and High Reliability to enable some Ultra-Reliable and Low Latency Communications (URLCC) use cases. We are not sure what happened to mMTC (massive Machine Type Communications), but it’s there in the current Technical Report draft. There was also agreement to use 6GHz as a spectrum key point, enabling study work to be conducted at frequencies below 6GHz and additional work above 6GHz.

During the discussion at the TSG meeting, the importance of forward compatibility – in both radio and protocol design – was stressed, as this will be key for phasing-in the necessary features, enabling all identified use cases, in subsequent releases of the 5G specification.

“We now have a more concrete plan to guide the studies in the Working Groups and to put us in the position to address both short term and long term opportunities of 5G,” said Dino Flore, Chairman of 3GPP TSG RAN.

The latest agreed requirements and deployment scenarios for NR can be found in this document, but be aware that these draft publications get updated on a very frequent basis.

However, the latest document does succinctly lay out the requirements for the NR, as follows:

That’s a long list, but necessary if all the envisaged new use cases can be enabled and supported by operators. A number of deployment scenarios have also already been identified, including various iterations of rural, urban and high-speed links for trains (no-one wants another fragmented rail system, like GSM-R). Interestingly, 3GPP has already conducted some evaluation work on support for connected cars, looking at two scenarios – highway scenario, for vehicles travelling along roads at high speeds, and an “urban grid” for densely deployed vehicles.

Other interesting points being considered (note, all of these are “works in progress” and subject to change) include:

The standardisation process might appear frighteningly complex to outsiders, but the 3GPP has been through this several times in the past and has tried and tested procedures in place.