What is the current status of LTE as 4 begins to give way to 5? 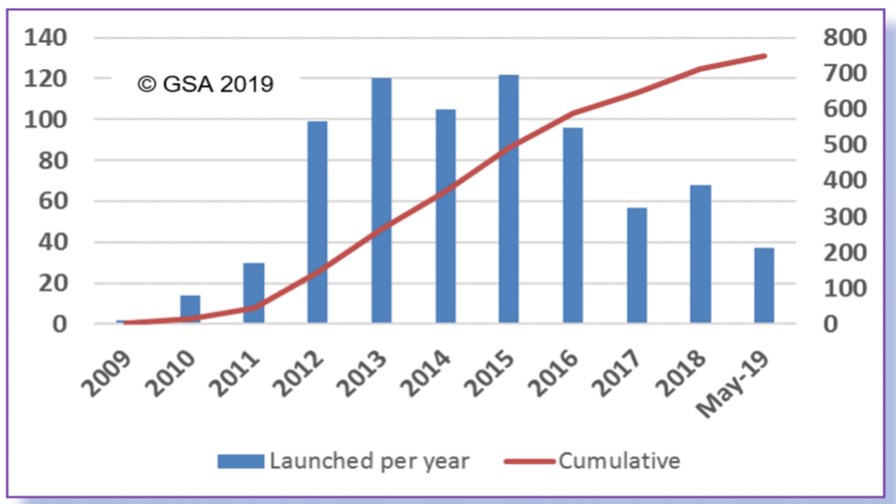 The GSA has produced a report entitled ‘Evolution from LTE to 5G - Global Market Status’  on the current ‘market status’ of LTE - in other words, at what stage of maturity is it as 5G start to arrive? Is it still on the way up? On a plateau? Or on the way down? It’s clearly very important for an industry that develops and manufactures all the components required for LTE networks (the industry represented by the GSA which now stands for Global mobile Suppliers Association) to get a good handle on this dynamic since they all need to know how, when and by how much their bit of the market is expanding or contracting and whether it’s likely to be worthwhile investing in R&D and manufacturing capacity to meet the needs of telco clients.

So the big picture is, as you might expect, that LTE is still in fine fettle, despite, or even because of, the onset of 5G in some territories. The GSA says it currently has around 4 billion subscribers and plays a part in connecting around 47% of mobile users worldwide. I say ‘plays a part’ because users usually have more than one connectivity option. Wi-Fi is obviously a big factor in many territories where it was rushed out to support 3G which couldn’t cope with data demand in the early smartphone days. By some estimates Wi-Fi still accounts for the lion’s share of  smartphone data consumption in many territories. It arrived to support 2G and 3G and then just stayed.

For that and other reasons the term ‘subscription’ is now slightly misleading. Subscribers now subscribe to a mobile service, not a specific cellular technology, and they are assigned connections which, in the case of 4G smartphones, may episodically involve 3G or even 2G where LTE service is poor. In some cases service may even revert to Wi-Fi if the signal is stronger and the connection better than the cellular service. In other words it is a heterogeneous network and service.

As time goes on and what was a 3G user purchases a new smartphone, he or she tends to adopt whatever the next iteration is, knowingly but also by default. In the early days of the ‘G’, and certainly in the case of 5G, smartphone owners may spend a proportion of their time on the previous ‘G’ as the network is built out, only getting the full benefit some way into their ‘subscription’.

So there has to be a better way of rating the progress of the phased introduction of a new ‘G’ than reverting to the rather binary and antique term ‘subscription’.

Here is the GSA’s main numbers defining both the demand and supply sides of the LTE industry. Key market facts include:

The full report is available (upon user registration) from the GSA