US steps up the pace of LTE-Advanced deployment 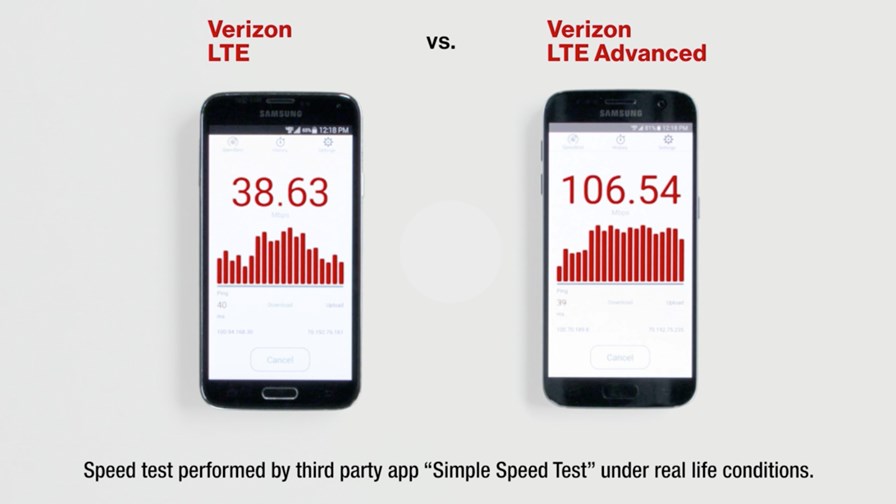 Sprint and Verizon went head to head yesterday in the PR battle over the next generation of LTE networks. Both US mobile telcos were keen to present themselves as the leaders of LTE-Advanced deployment, using three-channel carrier aggregation to increase mobile data download speeds for their customers.

Verizon was first off the blocks with its announcement that it had launched LTE-Advanced “to bring 50 per cent faster peak wireless data speeds to more than 288 million people in 461 cities from coast to coast”. For some reason, Verizon likes to refer to the 3GPP standard without the hyphen, which is slightly annoying for us purists, but not as annoying as being light on actual detail – it stops short of confirming if there is citywide coverage in these 461 cities.

Also don’t forget that a city in the US generally means any “incorporated place”, of which there are over 19,000 – although if you then filter this by assuming a real city has a population of 10,000 or more, then this drops to about 4,000. Still 10 per cent coverage of all US cities is pretty good when viewed from those countries (UK included) who are only dabbling in LTE-Advanced. The GSA has a wealth of useful information on global LTE-Advanced deployments, and is well worth book-marking. Still, Verizon promises that its LTE Advanced “hits all the major cities, and covers loads of less-served places”, so let’s hope for a proper nationwide deployment plan.

“Our customers just received a major network enhancement for no additional cost,” said Tami Erwin, head of operations for Verizon’s wireless unit. “Verizon LTE-Advanced works like a turbocharger on an engine. Speed boosts kick in when you need it most, with big data use. That’s when you get the big peak boost of Verizon LTE Advanced.”

Like all telcos supporting LTE-Advanced, Verizon uses the carrier aggregation technique to achieve its speed boosts by linking different slices of spectrum. It claims the result is 50 per cent faster peak speeds in cities for those customers using one of its 39 LTE Advanced-capable phones and tablets. Verizon is using a combination of 700MHz, AWS and PCS spectrum for its aggregation, and claims it is currently using “a combination of two-and three-carrier aggregation” – although it declines to detail exactly where 3-channel is in operation (more on that in a moment).

The telco says customers will benefit from peak download speeds of up to 225Mbit/s with 2-channel aggregation, compared to its regular 5-12Mbit/s service. The words “peak” and “up to” gloss over the fact that actual real-world speeds will be far lower than this, but it’s still a significant jump. Verizon also says that its “engineers deploying three-channel carrier aggregation have experienced speeds greater than 300Mbit/s”.

“With Verizon LTE-Advanced, we’re bringing the next generation of wireless technology to the market, coast to coast,” said Nicki Palmer, Verizon’s chief wireless network engineer. “We’re already in 461 markets and we’re already underway deploying three-channel carrier aggregation.” This suggests that 3-channel aggregation may not yet be available to its customers – but this isn’t surprising given that the number of 3-channel capable devices falls to single digits. However, it does achieve the goal of ramping up the PR hype with its competitors.

Speaking of which, Sprint made its own LTE-Advanced announcement yesterday. It said that it had conducted “the first live US demonstration of three-channel carrier aggregation” on Sprint’s network in Chicago. The demo apparently reached peak download speeds of more than 230Mbit/s running on Samsung’s network infrastructure and devices, including the Galaxy Note7 and Galaxy S7. Sprint said that it has deployed three-channel carrier aggregation on more than 500 cell sites in Chicago, using its 2.5GHz spectrum to boost download speeds.

“Ten months ago Chicago was our first LTE Plus market receiving two-channel carrier aggregation and we’re excited to take a leadership role as the first carrier in the US to publicly demonstrate three-channel carrier aggregation live in the field,” said Günther Ottendorfer, Sprint COO, Technology. “4K video and immersive virtual reality systems are gaining momentum and Sprint is ready with more spectrum and capacity than any other carrier to support our customers’ demands for data now and well into the future.”

Samsung – which is ramping up its involvement in network infrastructure (and reportedly becoming a rather vocal and demanding participant at 3GPP meetings) says that in optimal RF conditions, three-channel carrier aggregation can increase throughput by 50 per cent over the current two-channel carrier network.

“We continue to invest in LTE-Advanced technologies, and drive commercialisation of new three-channel aggregation features with carriers such as Sprint through both our network infrastructure and device products,” said Mark Louison, SVP and General Manager of Samsung Networks. “This will ensure customers will receive the best possible wireless service experience.”

Sprint says it currently uses two-channel carrier aggregation to deliver peak speeds of more than 100Mbit/s in 237 LTE Plus markets across the country using 40MHz of 2.5GHz spectrum. With three-channel carrier aggregation, Sprint will utilize 60MHz of spectrum in the 2.5GHz band to provide peak download speeds of more than 200Mbit/s on compatible devices. Sprint says it holds more than 160MHz of 2.5GHz spectrum in the top 100 US markets, which it uses in addition to its 800MHz and 1.9GHz spectrum.

Sprint announced its three-channel carrier aggregation plan this time last month, and was quick to dispel suggestions that the market wasn’t ready for the upgrades.

"74 per cent of our postpaid phone sales in the second quarter were carrier aggregation capable,” said John Saw, CTO of Sprint, during a conference call in July, "so the array of devices supporting CA is going to continue to increase. With the two-channel CA phones today that have been released, we do see the customer's experience improving significantly, but more importantly, what this really means for our customers is that the capacity for those networks, and for those sites with carrier aggregation, is also going to improve.”

So what about the other two national mobile operators in the US? A couple of months ago, it was revealed that T-Mobile US was testing carrier aggregation technology across three different spectrum bands – 1900MHz, 2100MHz AWS and 700MHz. However, the usually outspoken telco (or at least its CEO is) remains surprisingly tight-lipped about its plans. AT&T, meanwhile, first launched two-channel carrier aggregation in early 2014 (in Chicago, which is rapidly becoming LTE-central in the US), using 700MHz and 2100MHz AWS spectrum. However, since then it has also been keeping rather quiet over its plans. Monday’s announcements from Sprint and Verizon may well change that.