When do people use security cameras to check up on their pets? 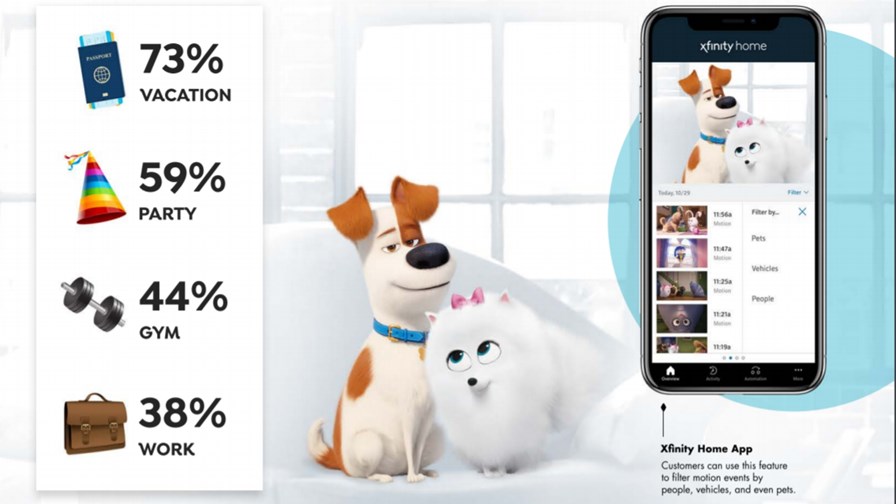 Any user of the Internet, and most of us are, can’t have helped noticing that it’s now dominated by our furry friends. Make a random foray into Facebook, Youtube, or Twitter and it won’t be long before a pet doing something amusing will hove into view... or even just a pet doing something boring. They’ll be there.

Certainly it hasn’t escaped the notice of Comcast in the US that there’s a full blooded pet fetish under way online.

Well a survey might be a good place to start. Find out what’s actually going on.

Which is what Comcast did. And it found that many US pet owners use their home security cameras to check on their pets more often than they check on their front doors.  “Nearly half (44%) of those surveyed check in on their pets four times a day or more, nearly 2 in 5 (38%) take a peek at their pet(s) during work, and 94% say checking in on their pet is one of the best parts of their day.” “Sad” as one American is apt to say.

My guess is that much of Europe and Asia is pet obsessed too, and I KNOW that the UK is. Clearly there’s an opportunity here. But first, a few more amusing survey facts from Comcast:

Comcast would like to help with that. It’s just launched a new AI assisted ‘pet filter’ feature on its Xfinity Camera which can quickly sort through hours of footage to identify just those with pets in them out of the more than one hundred motion-triggered video clips a typical camera can generate each day.

“We developed this feature to help our customers quickly filter motion-triggered events by people, vehicles, or pets because we wanted to bring them the video clips that matter most even faster,” said Dennis Mathew, Vice President and General Manager of Comcast’s Xfinity Home. “It’s an intelligent home security solution that enables our customers to easily check in on their loved ones from anywhere, anytime.”

Comcast is selling Xfinity Internet or Xfinity Home customers the high-definition Xfinity Camera and opt-in for continuous video recording, which provides access to up to seven to 10 days (depending on market) of video history.

It uses AI to zoom in on the activity “and create a smart thumbnail image of the pet, vehicle, or person, which makes it easier to review later on. As a result, users can spend less time searching through raw footage and more time watching relevant clips,” Comcast claims.