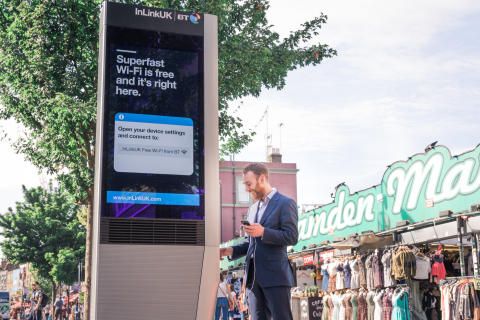 InLinkUk and BT have introduced a new automatic call blocking feature on all InLink digital street units, in a drive to prevent misuse of the free calls service provided to the public. It is the first development of its kind to be introduced on a UK public street phone.

In direct response, and as part of the InLink management strategy, both InLinkUK and BT have worked closely with the police and a number of local councils to design and implement the new call blocking technology which prevents the misuse of the units’ free calls service, while allowing communities to continue to benefit from the wide ranging benefits of the InLinks.

The new service - which has been activated across all InLinks deployed across the UK - uses an algorithm to identify suspicious call patterns and phone numbers. Any identified numbers are then blocked so that outgoing calls from any InLink in the UK cannot be made to those numbers.

Using anonymised data, the algorithm examines a range of factors including the frequency of attempted and connected calls, the length and distribution of such calls, as well as insights provided by the authorities. Initial results have shown that less than half a percent of total numbers called across the InLink network are associated with anti-social behaviour. These numbers have now been successfully blocked.

InLinkUK and BT have been able to rapidly roll out the new technology across the entire InLink network thanks to the units’ modular design and advanced digital capabilities. The existing technical solution to prevent outgoing calls from selected InLinks to all mobile numbers will also remain in place where agreed with councils or the police.

InLinkUK and BT are both committed to making a positive contribution to the communities in which the InLinks operate. Both parties have collaborated with the police and local councils, in delivering this new investment in InLink technology aimed at helping the authorities to address anti-social behaviour issues.

Manchester is one example of a city council with whom BT and InLinkUK have been working closely to address such issues. Councillor Pat Karney, Manchester City Council, said: “It's great to see the InLinks continue to adapt based on feedback from the council, police and wider community. Reducing opportunities for misuse while still providing useful services is just one aspect of tackling crime and anti-social behaviour in Manchester, but it is important we address it at the earliest opportunity. Together with local police and other partners, we will continue to work hard to tackle the underlying issues of substance abuse, drug dealing and related crime and anti-social behaviour here in Manchester.”

Matt Bird, General Manager at InLinkUK, said: “We are pleased that our ongoing collaboration with local authorities has resulted in the development of this brand new technology. We are committed to ensuring the InLinks are a welcomed and valued part of the communities they serve, and our investment into the development of this call restriction feature means we are able to readily identify misuse and quickly put a stop to it, whilst still providing a positive free service to local communities across the UK.”

Neil Scoresby, General Manager, Payphones, BT, said: “The speed at which we’ve introduced this new technology demonstrates our commitment to working with the authorities and local communities to address any concerns around anti-social issues and the InLinks. Developed and implemented by BT, the new call blocking feature will ensure that InLinks continue to be enjoyed by users in genuine need of the free, digital services provided by the units.”

The roll out and operation of InLinks in urban centres across the UK is based on an exclusive partnership between BT and London-based tech startup InLinkUK.