FRAMINGHAM, Mass., September 7, 2018 – The combined consumer and enterprise wireless local area network (WLAN) market segments rose 1.9% year over year in the second quarter of 2018 (2Q18) with worldwide revenues of $2.5 billion. According to results published in the International Data Corporation (IDC) Worldwide Quarterly WLAN Tracker, the enterprise segment grew 2.6% year over year in 2Q18 to $1.5 billion. Continued demand for network refreshes, digital transformation (DX) initiatives, and increased reliance on wireless networks for engaging with customers are positive indicators for continued growth in the second half of 2018.

From a geographic perspective, the enterprise WLAN market saw its strongest growth in 2Q18 coming from Japan, which grew 23.0% year over year, and from the Latin America region, which rose 8.9% on a year-over-year basis. Mexico, Latin America's largest market, saw a 24.5% revenue increase from a year earlier while Brazil's revenues were up 30.1% on the year. Central and Eastern Europe (CEE) also saw healthy growth rates with regional revenues increasing 6.3% compared to 2Q17. Notable CEE markets included Russia with a 7.3% year-over-year gain and Poland's with 12.9% growth.

Other regions had results more in line with the worldwide average. The Asia/Pacific (excluding Japan) (APeJ) region grew 3.8% year over year in 2Q18. Standouts in the region included China, the largest market in APeJ, which grew 19.7%, and India, which increased revenues 17.9% year over year. The United States market rose 2.1% year over year. The Middle East and Africa region was nearly flat (down 0.3%) year over year, while Western Europe's WLAN market declined 2.9% compared to 2Q17. Germany, which is the largest market in the Western Europe region, saw a 7.8% year-over-year decline, while France helped hold back more dramatic declines by posting 7.9% growth.

"While WLAN is a fairly mature market in the U.S., many regions around the world are expected to increase their investing in wireless technology, which will help fuel growth in the broader worldwide market throughout the coming year," said Petr Jirovsky, research manager, IDC Networking Trackers. "Meanwhile, the coming introduction of 802.11ax will lead to a new wave of refresh cycles for enterprises, providing an expected boost to the market starting later this year or early next year."

Cisco's worldwide enterprise WLAN revenue increased 3.3% year over year in 2Q18 and was up 12.5% sequentially between the first and second quarters of 2018. Cisco's worldwide market share was 43.6% in 2Q18, in line with the company's 43.3% share in 2Q17. IDC believes that the Meraki cloud-managed WLAN portfolio remains one of the primary growth drivers for Cisco. 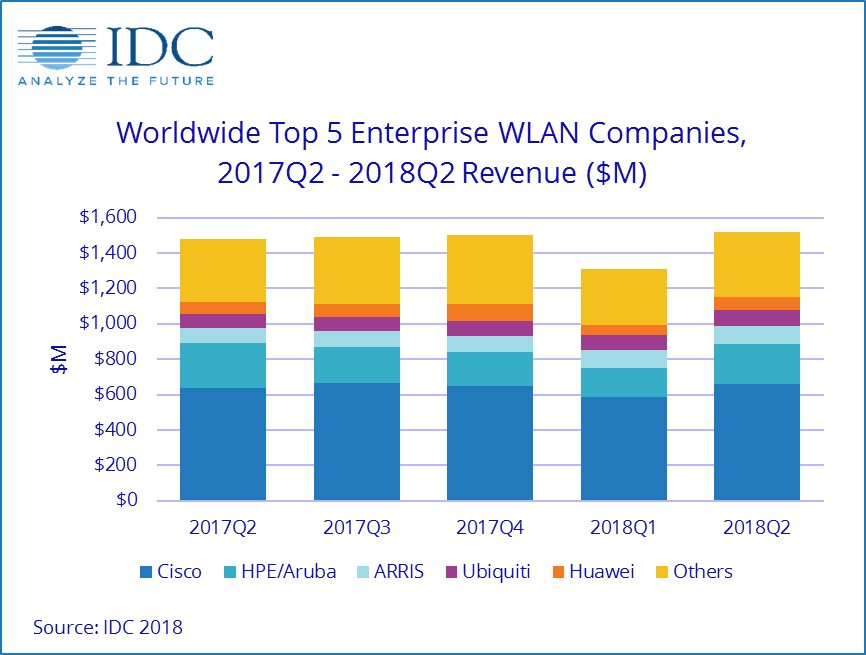 Worldwide enterprise WLAN market declines moderately in the second quarter of 2020, according to IDC