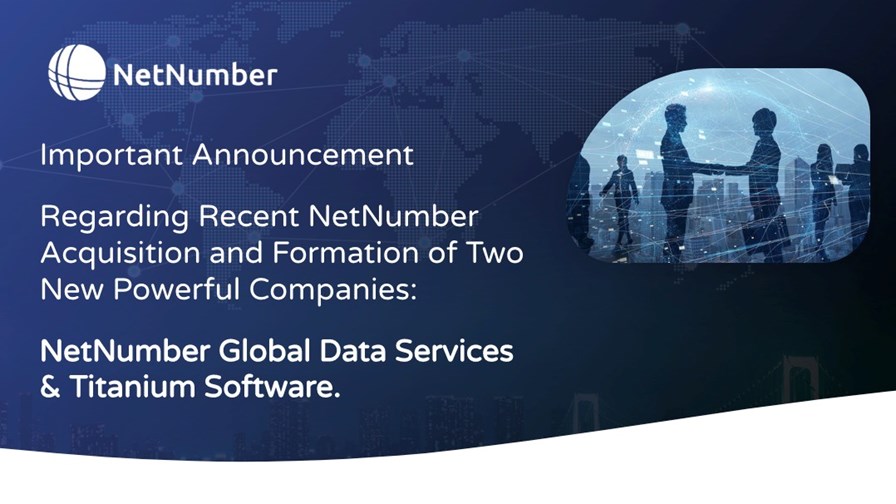 Netnumber is splitting into two separate companies, one of which will have a new owner. NetNumber Global Data Services, which is focused on the development of phone number intelligence technology that is used to combat fraud (among other functions), is being acquired by Boston-based private equity firm Abry Partners, and has named Steve Legge as its CEO. The remaining part of the company, which develops signaling and routing control technology for networks, is being renamed as Titanium Software and will have Netnumber’s CEO Kevin Peters at its head. “We are excited to unleash this next targeted phase of growth and innovation as a leading-edge platform-based solutions provider to our premier client set,” said Kevin Peters, CEO of Titanium Software. “Our team’s unwavering commitment to our recent transformation fully prepared us for this launch. Over the years, our platform and portfolio have been modernized to help our customers evolve with major industry trends while always safeguarding their existing networks. Our deep network experts now innovate on behalf of our customers at an efficient, rapid and predictable pace. As Titanium Software, we will leverage our unmatched history in this unique space, our compelling new capabilities, and our enduring strong bond with our telco and government customers to propel their businesses forward in this evolving network landscape.”

In the final stage of Adtran’s acquisition of ADVA, the German Ministry for Economic Affairs and Climate Action has granted a foreign direct investment approval, Adtran disclosed in a statement. The deal is likely to close by 15 July, or 18 July at the latest. According to Adtran’s CEO and chairman, Tom Stanton, the merger will bring about “a stronger company with a differentiated end-to-end portfolio of fibre networking solutions from the metro edge to aggregation to the in-home network” which, he believes, will position the new entity “especially well with the unprecedented level of broadband funding available.” The takeover was announced in August 2021.

Telecom Italia (TIM) is now assigning a value of €25bn to the fixed access network assets it is seeking to merge with Open Fiber in order to create a single national fixed broadband wholesale network operator, according to a Reuters report that cited two sources with knowledge of discussions. Previously it has been reported that TIM was assigning a value of about €20bn to the assets. But that new €25bn valuation is still short of the €31bn that TIM’s main shareholder, Vivendi, is seeking before giving that merger its blessing. Will Vivendi crack? Can TIM even warrant a €25bn valuation for its assets? It’s hard to see this situation being resolved before Europe heads to the beach...

South Korean chip designer Rebellions has attracted a $23m investment from telco KT Corp. to add to the $50m it raised in its Series A funding round last month. The Korea Times reports that KT wants to help build the chip design sector in the country. "While Korea ranks first in memory chip production and second in foundry, its global market share in chip design is only one percent," a KT spokesperson said. "We thought there should be a win-win cooperation between large domestic companies and fabless startups to improve the country's capability in the sector, and KT's full investment and business cooperation are expected to serve as a priming water for that."

Vodafone has launched a competition seeking ways to generate renewable power directly at mobile phone sites without the use of on-site fossil fuels. In a statement, the company explained that the Renewable Power Challenge is looking to find “new or better ways of powering sites” in rural or remote areas that lack access to power grids or experience frequent power outages. Shortlisted companies will be able to show their solutions to more than 4,000 tech players at the Arch Summit, an event organised by Tomorrow Street, a joint venture created by Vodafone in tandem with Luxemburg’s technology incubator Technoport to scale late-stage start-ups. Finalists will get the chance to develop a proof of concept of their solutions at Vodafone Group’s sites. The end goal is for the innovations to be deployed “across a significant share” of the telco group’s portfolio of more than 160,00 mobile sites in Europe and Africa.

It seems this is not the only step Vodafone has taken recently in terms of improving its sustainability credentials. Yesterday, Vodafone Business took the wraps off an internet of things (IoT) “ultra-early forest fire detection system” in a region of the Italian island Sardinia. As part of a project involving an electric vehicle off-road racing series, called Extreme E, the company is deploying low-power wide area network sensors to “quickly detect any fire and promptly send an alert to the authorities”. The solution does not require cellular coverage and will be installed on trees to detect “the smouldering phase before the fire takes hold, which will preserve forest footprint by shortening reaction times”, the operator noted in its statement – find out more here.

Huawei also appears to be upping efforts to tackle climatic challenges as the summer season in the northern hemisphere heats up. Recently, the network vendor demonstrated a pilot solution for detecting forest fires in Greece. The programme uses technology based on 5G, algorithms, artificial intelligence (AI) and drone robotics to identify extreme events, such as fires – learn more about the project here.