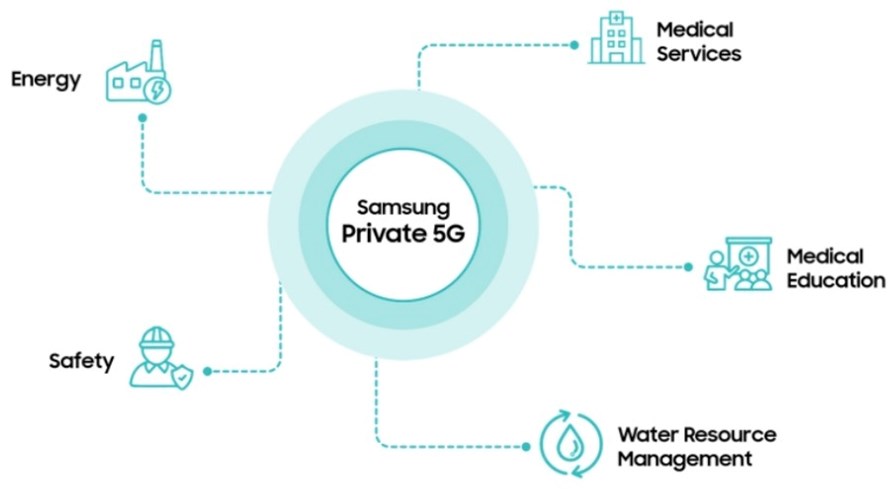 In today’s industry news roundup: Samsung beats its private 5G chest and looks ahead to IFA; the UK government is ready to impose much stricter security rules on British network operators; India’s telecom agencies are set to consult the industry about the regulation of digital messaging and voice apps; and much more!

Samsung has landed a plum private 5G gig in its home market of South Korea, where it has been chosen to provide a range of 5G solutions to five government agencies and private institutions. The deal is “part of the government initiative to advance the country’s private 5G ecosystem, allowing non-telecom operators to build and operate 5G networks using 4.7GHz and 28GHz — which are dedicated frequency bands for private 5G networks in Korea,” noted Samsung in its announcement about its selection. “Private 5G networks will enable progressive changes across all industry verticals. Applications like digital twins, autonomous vehicles, AI and AR are only a glimpse of the plethora of use cases Samsung’s 5G can bring to life,” stated Yong Chang, vice president of global sales and marketing, Networks Business at Samsung Electronics. “Samsung understands the unique needs of enterprises and is capable of delivering optimized network experiences. We are excited to help drive the private 5G ecosystem in Korea.” The vendor is to “provide its advanced private 5G network solutions to an array of entities in the public and private sectors — including energy, safety, water resource management, medical services and medical education.” This is great for Samsung, which introduced its private 5G solutions in October last year, but if the company really wants to prove itself as a major player in what is gearing up to be a lucrative 5G battleground, then it will need to follow this up with some large private wireless networking deals outside its domestic market in the way one of its key mobile networking equipment rivals Nokia has been able to do in recent years. Read more.

The South Korean giant has also been sharing its thoughts about the potential of the ‘sustainable smart home’ ahead of the upcoming IFA (Internationale Funkausstellung) technology trade fair in Berlin. “By combining SmartThings-based connectivity with the energy efficiency technology of home appliances, we are planning to become the No. 1 energy efficiency brand, expand sustainable efforts through meaningful collaborations and provide solutions to realize a Net Zero Home”, the company noted in this blog.

The UK government has used its powers under the Telecommunications (Security) Act, which became law in November last year, to draw up stringent new rules that network operators must follow. Described by the Department for Digital, Culture, Media & Sport (DCMS) as “among the strongest in the world”, the new regulations and code of practice, developed with the National Cyber Security Centre and regulator Ofcom, “will improve the UK’s cyber resilience by embedding good security practices in providers’ long term investment decisions and the day-to-day running of their networks and services”, according to the DCMS. From October, providers will be subject to the new rules and Ofcom will be able to use new powers to “ensure providers are taking appropriate and proportionate measures to meet their security duties and follow the guidance within the code of practice.” The measures, which must be acted upon and adhered to by March 2024, include:

For further details, see this announcement from the DCMS.

India’s Department of Telecommunications (DoT) has asked the country’s watchdog, the Telecom Regulatory Authority of India (TRAI), to kickstart a consultation process focused on the potential regulation of messaging and voice applications such as WhatsApp and Signal, according to The Hindu BusinessLine. The DoT will also liaise with India’s Ministry of Electronics and IT and Ministry of Information and Broadcasting on any consultation. The TRAI has looked into this matter before, having issued a paper in 2018 titled ‘Regulatory Framework for OTT Communication Services’, but concluded at the time that no action was necessary. Now, with the country’s main mobile operators Jio, Bharti AIrtel and Vodafone Idea ploughing billions of dollars into their 5G licences and infrastructure, the regulated communications service providers (CSPs) will be more keen than ever to see third party voice and messaging apps subjected to the same rules and regulations: This will be an interesting test for India’s regulatory authorities. And it’s worth keeping in mind that, according to the latest numbers from the TRAI, India had more than 1 billion active mobile connections in June and still has very few fixed lines, so mobile devices are the primary means of all types of communication in the country.

Verizon has entered into a long-term lease agreement with American Tower, under which it will be able to continue deployments of its 5G network across the passive infrastructure provider’s portfolio of communications sites in the US. According to American Tower, the deal offers “a simplified and efficient leasing process” and will drive mutual growth and value for years to come. “Verizon continues to build and run the networks that drive innovation, digitisation and technological advancements that are changing our world. Efficient, long-term strategic partnerships with our vendors are critical to continue advancing the industry forward and providing the network our customers have come to rely on,” said Heidi Hemmer, SVP of Engineering at Verizon. In 2015, American Tower acquired exclusive rights to nearly 12,000 towers from Verizon.

Staying on the passive infrastructure assets topic… Indonesian operator PT Indosat (trading as Indosat Ooredoo Hutchison following a merger between CK Hutchison Holdings and Ooredoo) is reportedly mulling the sale of approximately 1,800 towers for about US$250m. According to Bloomberg, the move would happen so that the telco cashes in on the increasing demand for digital infrastructure. No final decisions on actual transactions have been made yet, but interest is expected from companies in the industry, as well as funds in the infrastructure area. Last year, Indosat agreed to offload more than 4,000 towers to PT EPID Menara AssetCo, a Indonesian subsidiary of Edge Point Singapore, which is owned by DigitalBridge (then called Digital Colony). That deal was valued at US$750m.

MTN continues efforts to beef up its top-level management, nabbing former Orange executive Christian Bombrun, who will be its new CEO of Digital Platforms from 1 September. Bombrun will succeed Minnie Harris, who shifts her focus to become CFO of Digital Platforms. In its statement, the telco explained Bombrun will be tasked with the responsibility to design, implement and maintain the long-term growth and commercial strategy for digital offerings by the group. In his 25 years of experience in the sector, Bombrun’s most recent role was head of communication and digital for the Emmanuel Macron presidential campaign in France. Prior to this, he held various executive positions at Orange in France and at group level. The move comes about a week after MTN appointed an executive for Business Finance. Earlier this year, the group also hired a new executive for the Enterprise Business Unit.

Fibre manufacturer Corning is to build a new manufacturing plant in Arizona to help meet the needs of network operators that plan to invest even more heavily in fibre-to-the-home networks once the US government’s $42.45bn Broadband Equity, Access, and Deployment Program gets allocated to eligible carriers. Currently, that funding allocation process is moving at a snail’s pace due to a lack of accurate maps that show exactly where network buildouts are most required, according to a recent report from the Wall Street Journal. The new Corning plant will be focused on providing the fibre needed by AT&T, the CEOs of the operator and the vendor told Reuters.

Nokia and MEXT collaborate on 5G private wireless in Turkey