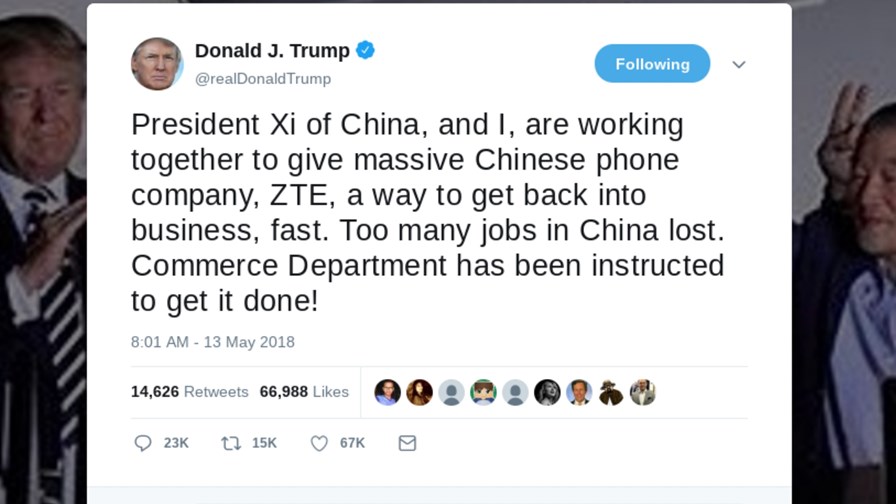 As if he didn’t have enough to do, on Sunday President Trump announced himself concerned about all the Chinese jobs now in jeopardy following the decision of the US Commerce Department to cut ZTE off the approved list for receiving US technology - we all presumed under pressure from... President Trump.

With the tweet above he ordered the Commerce Department to reverse its decision to cut  ZTE off from its US suppliers because of its “egregious” behaviour in not punishing its own employees who had facilitated an exchange of high technology with Iran.

ZTE had already paid the US a huge fine for the infringement, the extra penalty was seen (probably rightly) as a ratcheting up of the trade pressure being applied by the US, seemingly in the hope of starting some sort of trade war (or at least a noisy skirmish).

But by Sunday, Trump had apparently come to some sort of informal arrangement with President Xi, and the lifting of what had been interpreted by many as a ‘death sentence’ on ZTE was apparently a way of sweetening the atmosphere in advance of talks on trade with Xi and, of course, the summit with Kim Jong-un.

The above tweet seems to have come as a major shock to much of Trump’s base (if the response on Twitter is anything to go by). Tweets ranged from accusations of ‘traitor’ to wonderment that Trump was worrying about Chinese workers - the very people just days before he had identified as stealing American jobs.

The response in Hong Kong, Taiwan and in China itself was celebratory and the stock markets there rose accordingly as ZTE suppliers celebrated that things were looking up.

But US commentators are now pointing out that the sanctions on ZTE were not an executive matter, but rather a sole concern of the US Commerce Department. Trump just didn’t have the power to suddenly order it to go back on a decision it had duly made, following all its own guidelines and procedures.

So the real meaning of the presidential tweet was subsequently amended by the White House from a shove to a nudge.  Secretary Wilbur Ross was to “exercise his independent judgment, consistent with applicable laws and regulations, to resolve the regulatory action involving ZTE based on its facts.” Yeah, right.

Meanwhile, in an apparent a quid-pro-quo, Chinese regulators have restarted their review of Qualcomm’s application to acquire NXP Semiconductors. That application had been shoved into a drawer as trade tensions between China and the US grew, but now China’s Ministry of Commerce officials have been told to hurry the review along, although not by tweet.

Originally the review was designed to allay (or not) Chinese fears that Qualcomm would  extend its signature patent licensing business into mobile payments, autonomous driving and so on in such a way as to disadvantage local Chinese companies.

The latest move by China to ease Qualcomm’s application seems to be part of an informally negotiated, synchronised step back by both countries from the brink of a full-scale trade war in electronics. Perhaps they both now see clearly how catastrophic a global electronics trade shut-down would be for everyone concerned. Or perhaps the  two moves are just the latest installment of the Trump chaos with no real thought-out plan?

One thing is for sure, however many kisses and cuddles are exchanged between Presidents Trump and Xi, the Chinese will be more convinced than ever of the necessity to get closer to high tech self-reliance. Already all part of China’s plan.