The Summer of Discontent: telcos in the firing line 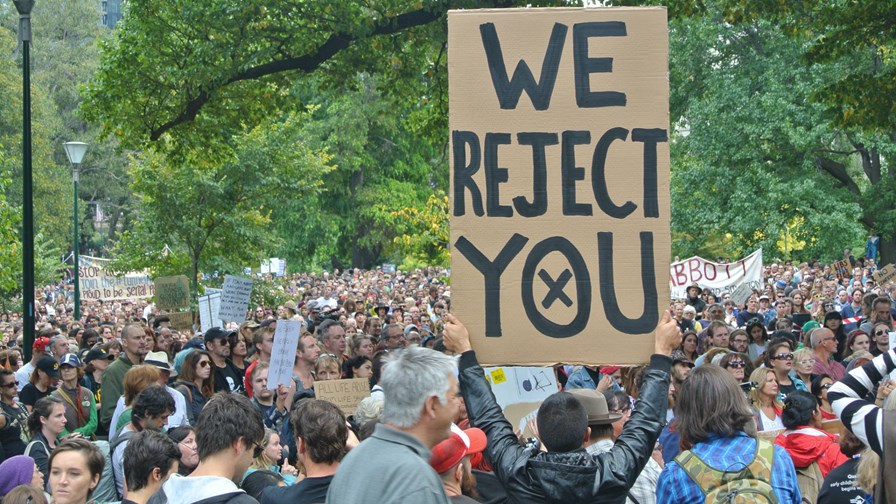 Every day brings the sort of story that, at any other time of the year, would stay in the headlines for a week. This year they come one after the other: terrorism, murder, political revelation and business scandal.

And we in telecoms are not in some isolated techy backwater either. Some of the telecoms and network news we've had over the past few days is actually fall-out from the general turmoil and anti-establishment angst that's seen Brexit and Trumpism (for instance) boil up on either side of the Atlantic.

Exactly 40 years ago a movie called Network hit the world’s cinema screens. It didn’t refer to our sort of network but to the then relatively new television network. We’re talking way back when TV anchor men and women wore purple and brown, sported flared trousers (both sexes) bushy moustaches (just the men) and, as far as some of the earlier, more bookish, newspaper-reading generation was concerned, had completely devalued cultural and political discourse (ring any bells?).

In the movie the multi-channel TV landscape and its resulting business models had been hijacked by vested interests and the public was being brainwashed. But as always, “there was a man”... a man who could see through the BS. This man was Howard Beale, an anchor himself,  who, one evening mid-broadcast, had a nervous breakdown and urged his viewers to get out of their chairs, go to the window and shout, “We’re mad as hell and we’re not going to take it any more.”

This being a movie, they did (worth watching on YouTube).

While the public at large loved the movie they obviously kept “taking it” for at least for 40 years… arguably until last year some time when rage seems to have taken hold. What fueled it?

Perhaps the sense that, no matter how hard we as an electorate or interest group push and petition, protest, tweet and post, we will be ignored.  It’s the feeling that we can't (as a polity) get what we want from the system.

As a result large numbers of “mad as hell, non-takers” in the US gravitated towards either Donald Trump on the right or Bernie Sanders on the left in a remarkable echo of what was happening in the UK, where large numbers were also gravitating to either beardie socialist Jeremy Corbyn (left) or to Nigel Farage and his anti-EU party on the right. Our split journey has resulted in us planning to leave the EU. In the US it looks increasingly like the “mad as hell, non-takers” will be welcoming in a Trump presidency.

So where are we and how does all this relate to telecoms?

Let me explain. Today TelecomTV is running another installment of  the interminable story of BT and the missing high speed broadband. Why, the UK public has been asking itself, is it proving so, so difficult to get fibre broadband deployed?

No, not a copper service that pretends it’s broadband, but real fibre. The glass stuff that countries like Japan or Korea thought would be an excellent idea to deploy way back in the 1990s. The glass stuff that study after study shows can be deployed in expectation of a reasonable return on investment for the provider and a massive boost for the economy in general.

A similar argument is playing out in many other countries such as the US where reasonably priced high speed broadband stubbornly refuses to come to many communities.

Today my colleague Guy Daniels has laid out the latest twist and turn in this seemingly never-ending UK tussle between the regulator and the regulated (see Ofcom announces its plans for reform of BT’s Openreach and  BT preempts Ofcom report and offers changes to Openreach).

This time, however, one senses a new determination from Ofcom galvanised by considerable public and industry support. The reason that it’s moving so far with its structural separation proposals for BT’s Openreach and the reason that BT is anxious to come to a ‘deal’, is that the angry public is just not going to take it any more.

I believe a similar scenario has played out with BEREC, the EU equivalent (just about) of the FCC. It is the EU level telecoms regulator and like the FCC, BEREC has been handed the political hot potato of net neutrality. In response it developed net neutrality guidelines for the member states which have promptly come under fire from industry interests who want them rolled back. To stiffen its resolve, one suspects, BEREC decided to hold a public consultation to see how much support the proposed rules actually had.

It has just announced that it had had a deluge of almost 500 000 submissions, the overwhelming majority of those presumably urging it to maintain the net neutrality proposals.

As the Summer of discontent grinds on, we’re wondering what’s next.