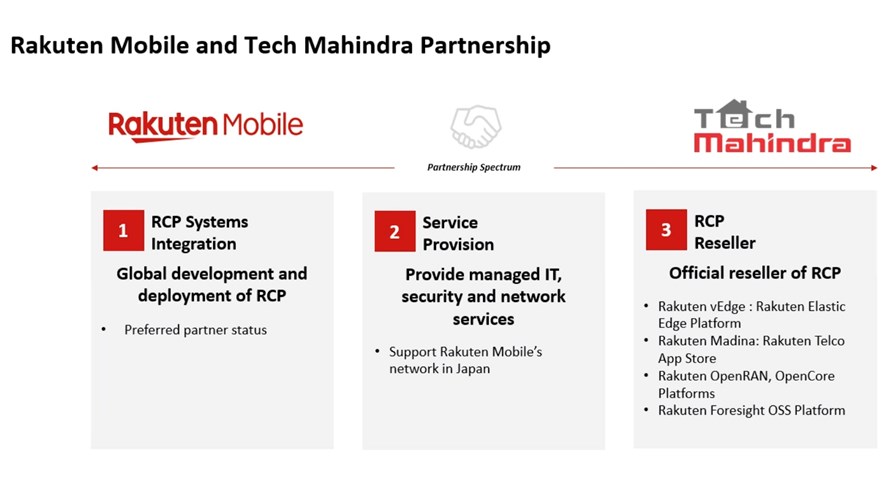 Disruptive Japanese mobile operator Rakuten Mobile has chosen Tech Mahindra for a key role in the ongoing development of its network in Japan and Rakuten’s plan to export its cloud native mobile network technology and know-how to the rest of the world via the planned Rakuten Communications Platform (RCP).

The Indian technology developer and integrator is set to provide a range of managed IT, security and network services to the Rakuten Mobile, which launched 4G services in April and is set to switch on its Open RAN-based 5G network within days, and be a preferred partner and reseller for RCP, the mobile network functions ‘app store’ that Rakuten plans to launch in the coming months.

As a partner, Tech Mahindra will provide technology and professional services support to RCP customers: Once launched, RCP will offer a suite of “solutions and services for the deployment of virtualized networks at speed and low cost by telecom companies and enterprises around the world, tailored for their unique needs.”

In effect, the RCP will act as an app store for mobile network operators that want to build and run ‘disaggregated’ networks based on technology building blocks from multiple, best-of-breed technology developers, some (or even all) of which could be sourced from the RCP. Rakuten sees particular potential for enterprises to use RCP to build campus/private networks.

The new partners are ambitious: “Tech Mahindra and Rakuten Mobile will leverage their partnership to develop and deploy virtualized mobile networks based on RCP to disrupt the telecom landscape. RCP contains all the elements of the Rakuten Mobile network, including telco applications and software from multiple vendors, OSS and BSS, edge computing and virtual network management functions. RCP also incorporates an app-store-like interface where customers can tailor the platform to their local requirements,” they noted in their joint statement.

The RCP is still in development: Rakuten Mobile CTO Tareq Amin noted during a webcast on Wednesday morning that he wanted to launch his company’s 5G network first and prove that it works before offering the suite of elements to others. But it sounds as if RCP may become a reality soon: “We are within months of hardening the 5G stack,” noted Amin.

The RCP will include 5G core capabilities that Rakuten is jointly developing with NEC (see this story) and virtual radio access network (RAN) capabilities developed by Altiostar, a key technology supplier to Rakuten Mobile.

Rakuten has been an investor in Altiostar since at least the start of 2019, but as part of the new collaboration, Tech Mahindra has sold its stake in the virtualized RAN technology specialist to Rakuten for $45 million: The transaction was conducted between the Indian company’s Americas unit and Rakuten USA.

Executives from both parties declined to divulge any further details, other than to say that Rakuten Mobile is now the majority shareholder in Altiostar, which has provided its virtualized RAN software for Rakuten’s cloud native mobile network rollout, including its Open RAN-based 5G network.

The relationship with Tech Mahindra, which has long been a partner to major telcos worldwide (including AT&T, BT, Telefónica and many more, as well as India’s operators), is the latest in a growing list of collaborations upon which Rakuten plans to build an influential role in the global market for mobile network technology.

In addition to its joint core developments with NEC, Rakuten last week announced a collaboration with Telefónica on the development of Open RAN, OSS and 5G core technologies, and is keen to strike other deals with like-minded operators. (See Rakuten, Telefónica join forces on Open RAN developments.)