Mobile operators in Indonesia are to test and trial Open RAN technology to determine whether open, disaggregated technology could play a part in plans to take mobile broadband connectivity to thousands of rural villages in the expansive country that comprises more than 17,000 islands and is home to more than 270 million people.

The country has pockets of high-density urban areas, such as the capital Jakarta, but it also has an extensive rural population, with thousands of villages lacking any communications infrastructure. Despite the rollout of 3G and 4G networks by mobile operators, about 61 million Indonesians currently don’t have access to the Internet, according to the GSMA.

And in common with many other developing markets, network operators are faced with the conundrum of how to build out network cost-efficiently in a market with relatively low ARPU levels and challenging return on investment models.

Despite such challenges, the Indonesian government has initiated a number of programs and initiatives, including Making Indonesia 4.0, to enhance the country’s digital infrastructure and boost local industry and it sees the telecom sector playing a role, in both providing connectivity and services but also encouraging local network technology development for domestic use and export.

As a result, the Telecom Infra Project (TIP) and the GSMA regard Indonesia as a market where Open RAN technology could play a useful role and where tech startups could be nurtured. (TIP is home to the OpenRAN Project Group, while TIP and the GSMA have an agreement by which the GSMA shares the requirements of its members into TIP working groups.)

To help kickstart the introduction of Open RAN and other open, disaggregated networking technologies, the Telecom Infra Project (TIP), the GSMA, Telkom University and local network operators are collaborating to set up, support and make use of a new TIP Community Lab and ‘centre of excellence’ at the private, ICT-focused university’s campus: That facility is set to open in the third quarter of this year.

All five domestic mobile operators are keen to be involved – Telkomsel, Indosat Ooredoo, XL Axiata, Smartfren and Hutchison 3 Indonesia have pledged their support for the initiative and are keen to see whether the deployment of open RAN technology can make rural rollouts cost-effective. In addition local ISP Net 1 is also looking to get involved in tests and trials.

According to Vishal Mathur, Global Head of Engagement at TIP, Indosat and Smartfren have started assessing open RAN technologies and have been engaging with several technology suppliers, including Parallel Wireless and Mavenir. Indosat first highlighted its intention to trial open RAN technology in March this year.

He says the phase 1 technical trials being undertaken by Indosat and Smartfren – due to start “very soon,” noted Indosat Chief Operating Officer Vikram Sinha during an online presentation – will involve a maximum of 30 cell sites and will enable the operators to provide feedback on the specific requirements needed to meet their goals based around the OpenRAN architecture as developed by TIP (see the diagram below). The TIP Community Lab will be used to test and validate the solutions developed for the Indonesian operators. 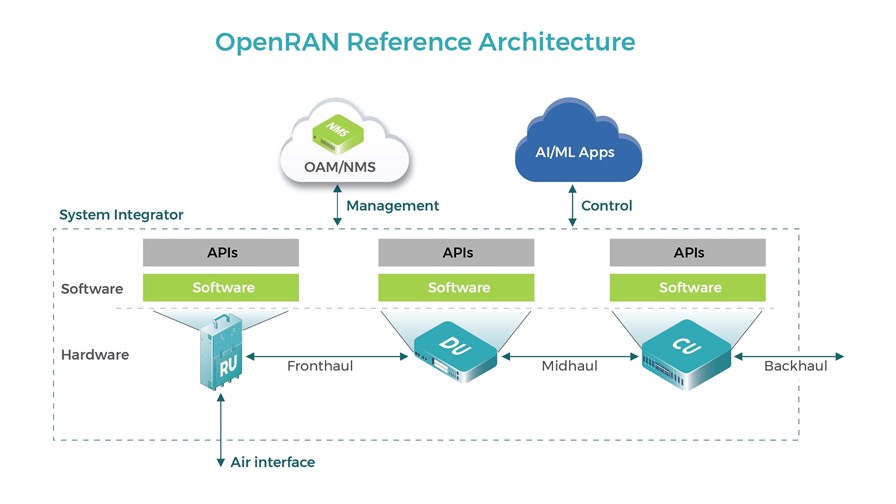 Further details are currently scant. Telkom University appears to be the current focal point of efforts and developments, but it’s unclear how the Community Lab is being funded – Mathur suggested that the university was providing any initial resources needed – and while there were various references to the incubation of local startups and a desire to foster a domestic networking technology ecosystem, no details of any funding programs or investment initiatives were shared during the online presentation that introduced the founding of the lab.

Mathur, though, did mention that a TIP Ecosystem Acceleration Center (TEAC) might be considered for Indonesia: TEACs are designed to attract and help develop relevant startups and already exist in the UK, Germany and South Korea, where they are hosted by local network operators (BT, Deutsche Telekom and SK Telecom).

While TIP is keen to point out that the Community Lab will also address developments related to optical and IP infrastructure in the future, it is the potential of open RAN that is capturing the attention of the operators in Indonesia right now, as it is in other countries. Now, though, comes the hard part of figuring out whether open, disaggregated network technology can meet the technical, operational and economic constraints of building and running communications infrastructure in such a challenging market.