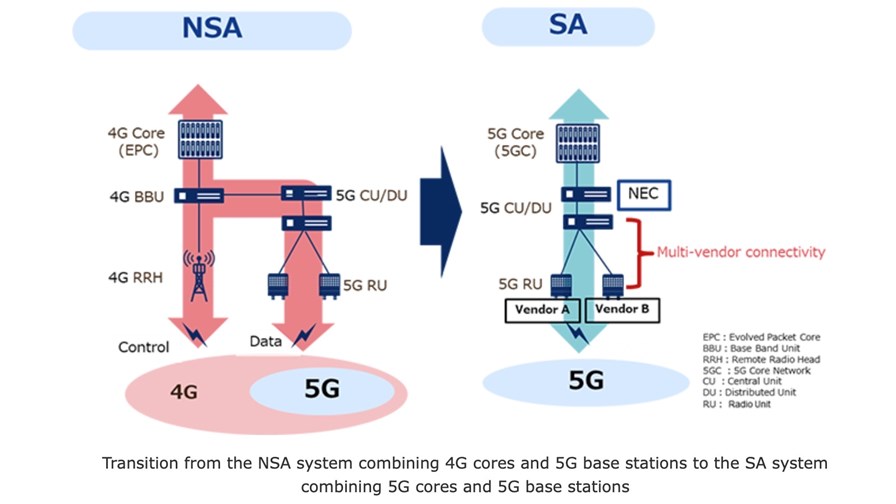 Japanese operator NTT DOCOMO and its close vendor partner NEC claim to have successfully tested a 5G standalone cell using a 5G base station baseband unit (5G CU/DU) conforming to Open RAN specifications, coupled with radio units from different (unidentified) vendors. “The multi-vendor interoperability test used a software upgrade to introduce SA capability to NEC's 5G non-standalone (NSA) CU/DU operating on DOCOMO's commercial network,” noted the partners. “As a result, the system was transformed from a 5G NSA system into a 5G SA system using the same 5G CU/DU hardware. Since the 5G CU/DU can also accommodate existing NSA, the unit can be used to flexibly and quickly upgrade a 5G network. Going forward, the two companies aim to introduce the 5G CU/DU for DOCOMO's SA services in order to further expand its 5G services.” See the diagram above. That sounds of interest, for sure, and shows how such changes can be implemented with a software upgrade, but it might be a while before the full extent (or lack) of the gains made from such a process might be identified and realized compared with the more traditional upgrade route. Read more.

Belgian national operator Proximus appears to be planning to raise funds for its network investments, particularly fibre access deployments, by listing a minority stake in its communications platform-as-a-service (CPaaS) subsidiary TeleSign via a merger with a SPAC (special purpose acquisition company). Following rumours of M&A activity involving the unit, Proximus issued a statement confirming it has “initiated preliminary discussions regarding a potential strategic transaction involving TeleSign, a US based, 100% owned affiliate of Proximus, a leading mobile digital identity player, active in fraud management, authentication and secure CPaaS. As indicated in the press release of 9 February 2021, Proximus is committed to support TeleSign on its fast growth path as a leading authentication and digital identity player. To achieve this, Proximus has been exploring different strategic options to unlock the full value of TeleSign while keeping majority ownership. A public listing through a SPAC merger has indeed come out of this process as one of the potential strategic routes that Proximus is currently exploring. The process is still ongoing and several steps need to be taken to finalize.” CPaaS is a hot market right now: Ericsson just announced the acquisition for $6.2 billion of Vonage, and the market is in serious growth mode. Can Proximus get a $1 billion valuation for TeleSign? It still might be a stretch.

The mobile chip giant has also unveiled Snapdragon 8 Gen 1, which it claims is the “most advanced 5G mobile platform and the world’s first 5G modem-RF solution to reach 10 Gigabit download speeds.” Read more.

And in a busy week for the company, Qualcomm also expanded its product set for PCs with the Snapdragon 8cx Gen 3 compute platform, which provides a host of features alongside 5G connectivity, as well as the Snapdragon 7c+ Gen 3 Compute Platform, which offers 5G connectivity and AI features for entry-tier Windows PC and Chromebook models. Read more.