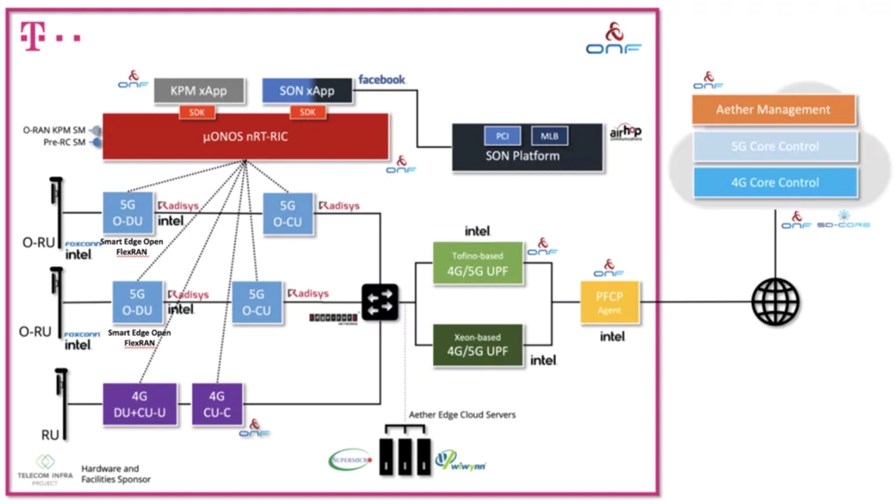 Two major developments in next-gen wide area network communications networking architectures, one from Deutsche Telekom and the Open Networking Foundation (ONF) and the other from Google Cloud, lead the way in today’s race for the industry news finishing line.

Deutsche Telekom and the Open Networking Foundation (ONF) have launched the SD-RAN Berlin Trial, “the first field trial implementing fully disaggregated Open RAN solutions using ONF’s RAN Intelligent Controller (RIC) software platform as defined by the O-RAN architecture,” the partners announced. The trial, which is for 4G and 5G Standalone deployments, is up and running at DT’s campus in Berlin. The SD-RAN trial hosted by DT highlights the promise and flexibility of open RAN by integrating components from eight companies: AirHop, Edgecore, Facebook, Foxconn, Intel, Radisys, Supermicro and Wiwynn. Additionally, the Telecom Infra Project (TIP) is participating by providing hardware and facilities out of the TIP Community Lab in Berlin that is hosted by DT. The on-site field trial integration and testing is being coordinated and supported by Highstreet Technologies. Read more.

DISH Network, which is still building up to the launch of its Open RAN-based 5G network and service launch, has chosen Spirent Communications to “autonomously test its 5G network core and validate its performance.” This, apparently, will “allow DISH to continuously integrate functionality into its 5G network and rapidly deliver leading-edge solutions to both retail and enterprise customers.” Read more.

Following the recent launch of its on-premises private cloud platform MX Industrial Edge, Nokia is boasting 100 Gbit/s throughput on a single server during a trial conducted with Intel. The trial “demonstrated that the Nokia Digital Automation Cloud (NDAC) and MX Industrial Edge systems are not only ready for high bandwidth 5G private wireless deployments, but also have the capacity for processing of Industry 4.0 use cases running on the edge at scale,” noted the vendor in this announcement.

Nokia has also bolstered its MX Industrial Edge proposition by announcing a number of partner applications that run on the platform.

The Council of State in France has rejected appeals made by two environmental associations and a number of citizens against the award of 5G spectrum in 2020 by regulator ARCEP, which notes in this announcement that the ruling “validates the procedure for allocating frequencies in the 3.5 GHz band and the authorizations issued in this band to the four metropolitan mobile operators. It therefore closes all disputes relating to said procedure.”